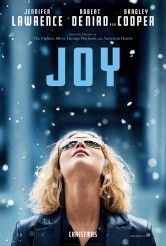 An entertaining ode to an unlikely entrepreneur 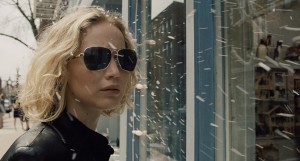 JOY is, in broad strokes, the story of Joy Mangano, though how closely this hews to actual history is an open question so far as onscreen crawls go. On its own terms, JOY works, and if it never exactly produces the title sentiment, it’s still a satisfying experience.

JOY is partially narrated by our heroine’s beloved grandmother Mimi (Diane Ladd) who recalls her granddaughter as a little girl (played as a child by Isabella Crovetti-Cramp) who loves making her own playthings and imagining grand adventures that, significantly, don’t include a handsome prince (or a beautiful princess, either) to make things perfect.

Everyone in the family, including Joy’s resentful half-sister Peggy (Elisabeth Rohm), walks all over her. Joy is plumber, chauffeur, support, caretaker and more. Then two things happen. One, Rudy starts dating rich widow Trudy (Isabella Rossellini). Two, as a consequence of this, Joy’s old creative spirit reasserts itself and she invents a new kind of mop.

At this point in the proceedings, JOY settles down and becomes a dramedy about the convoluted process of bringing a new product to the market when one has practically no start-up money, no fame whatever and a family that is not entirely on board with the effort. Joy’s biggest supporters are old childhood buddy Jackie (Dascha Polanco) and, ironically, Tony. Trudy has no problem pouncing all over Joy for any infraction, Rudy doesn’t know how to stand up for his daughter and Peggy wants some investment money for her own half-shaped notions. Finally – this isn’t a spoiler, we’re told in the opening moments – Joy stands up for herself.

The movie becomes progressively more fun as it goes forward. Even those who aren’t partial to comedies about family dysfunction can become drawn into the insane machinations, conspiracies and other roadblocks in Joy’s path. Certainly, it’s a pleasure to see Lawrence play a character who blossoms from downtrodden to daunting, without a bow or arrow in sight.

There’s also glee to be had with where Joy’s journey takes her, playing with nostalgia, cable media and tech from the Nineties, when most of the film is set. Bradley Cooper is excellent in a supporting role as a man attempting to walk the line between cordiality and business (no romance).

This is the third time that filmmaker Russell has worked with Lawrence, Cooper and De Niro, but because the actors’ roles are so different and they’re in a different configuration here, there isn’t a sense of familiarity so much as simply assurance between the cast mates. Standouts in the ensemble include Madsen, doing a great baffled woman who simply wants to be taken care of by anyone available, and Rossellini, who can mix surface warmth and underlying dismissive arrogance like nobody’s business. Ramirez is warm and amusing and Rohm is both effective and virtually unrecognizable as Peggy. Soap opera fans should take note of some of that field’s heavyweights – Susan Lucci, Donna Mills, Maurice Benard among them – who appear on the shows that Terry watches so avidly.

JOY is gratifying because it’s engaging, and because it’s a kind of story that we don’t usually get, at least in a version this well-told – it’s about a woman consumed the with desire to do something useful in the world who insists on fairness from that world, and it’s playful instead of ponderous.