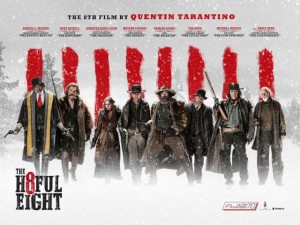 There are a lot of clashes of sensibilities on display in writer/director Quentin Tarantino’s eighth feature film, THE HATEFUL EIGHT. Part of the movie is a big-screen, wide open spaces epic that, in its 70mm road show format, is almost literally breathtaking in its stark beauty. Another big part of the movie is a kind of Agatha Christie one-room murder mystery, with a crowd of post-Civil War potential baddies instead of upper-class Brits and, instead of Miss Marple or Hercule Poirot, Samuel L. Jackson at his most badass.

This doesn’t mean that Jackson’s character, Major Marquis Warren, formerly a soldier in the Union Army, is entirely exempt from the “hateful” category of the title. Warren, as he comes to tell us and his companions, has committed his share of violent acts in the name of self-preservation and vengeance. Even so, he’s no worse than most (and better than some) of the folks we meet in the middle of a Wyoming blizzard that leaves a small group stranded in Minnie’s Haberdashery, a little bar and grub establishment a short distance from the town of Red Rock.

Besides Warren, here’s the list of folks stuck together inside Minnie’s: bounty hunter John Ruth (Kurt Russell), who knows Warren well enough to let him ride in the stagecoach Ruth has commissioned, though not enough to let him keep his guns on said ride; Daisy Domergue (Jennifer Jason Leigh), Ruth’s prisoner; Chris Mannix (Walton Goggins), an erstwhile Confederate post-war gang member who claims to be headed to Red Rock to be its new sheriff; Bob (Demian Bichir), who is tending to Minnie’s place in Minnie’s absence; Oswaldo Mowbray (Tim Roth), a British traveling hangman; Joe Gage (Michael Madsen), who is sitting in the corner, quietly writing; General Sandy Smithers, who led a particularly racist regiment of Confederate troops; stagecoach driver O.B. Jackson (James Parks). That actually makes nine, so whether the tally is meant to exclude Warren or whether one of the others isn’t hateful is one of the topics up for discussion.

And, boy, there is a lot of discussion. This being a Tarantino movie, the talk is never dull or rote. It’s easy to see why the actors would relish these roles – there are twists and monologues and emotions that just don’t come up in these combinations elsewhere.

Jackson, of course, is commanding and infinitely deep. Russell is terrific, as is Leigh, who gets to demonstrate a wily, fearless persona that’s fascinating to watch. Dern is impressive and multifaceted as the old general. Goggins is superb; while this is a different character and a different performance, people who miss seeing him on the now-gone JUSTIFIED will feel rewarded.

Sam Peckinpah and Sergio Leone made very bloody Westerns, but THE HATEFUL EIGHT ratchets up the gore to EVIL DEAD levels. It’s really well-executed and those who appreciate this sort of thing (including this reviewer) will find a lot to enjoy here; those who don’t enjoy this should be warned of the same. Ennio Morricone did the instant Western-classic score, incorporating some well-chosen selections from his previous compositions for THE THING.

There are a few issues with the structure of THE HATEFUL EIGHT, mainly that at nearly three hours, the revelations of the mysteries are reasonable and not tipped far in advance, but they’re also not as fulfilling as they might have been when they arrive. In continuity terms, there’s one flashback where a blanket is a key plot point, yet there is no blanket either in sight or plausibly stored anywhere nearby. It’s unclear if this fact is meant to tip us that the flashback is invented, or meant to indicate the state of mind of the characters, or just an improbable state of affairs.

Then there are some meta-issues. Tarantino wants to talk about black/white racial tension in his work and fair enough, but, without getting into a polemic here, his points might have more credibility if he didn’t throw in some non-rebutted anti-Mexican humor coming from central characters. There’s also some evidently-intended-to-be-funny forced sex here – it’s not misogynistic, but rape humor isn’t for everyone (including this reviewer).

THE HATEFUL EIGHT probably won’t top most people’s lists of either 2015’s or Tarantino’s top films, but if one has a desire to see a gorgeous-looking, bloody Western mystery with a writer/director and some fine actors all having a great time, here it is.