©2015 PBS/Robert Viglasky/Hartswood Films and BBC One and MASTERPIECE
Benedict Cumberbatch is Sherlock Holmes in SHERLOCK: THE ABOMINABLE BRIDE
Interviews 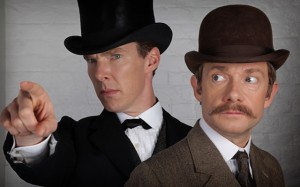 Among the most successful collaborations between the United States’ PBS and England’s BBC is the series SHERLOCK, which airs in the U.S. as part of PBS’ Masterpiece Theatre. Adapted by Steven Moffat and Mark Gatiss from Sir Arthur Conan Doyle’s novels and stories, SHERLOCK takes the famed detective Holmes, played by Benedict Cumberbatch, and his loyal sidekick Dr. John Watson, played by Martin Freeman, and presents them as contemporary men in present-day London.

Except that the current special, SHERLOCK: THE ABOMINABLE BRIDE, airing on PBS Friday, January 1, is set in the Victorian era.

First at a question-and-answer session set up by PBS for the Television Critics Association, and later talking informally with a smaller group, Moffat explains this twist and more.

For starters, Moffat says that he and Gatiss never conceived of setting their series overall in the nineteenth century, when Conan Doyle wrote his works. “It was always going to be the updated version, because it was just Mark and I sitting on the train, really, [talking] about how much we like the [Basil] Rathbone and [Nigel] Bruce updated versions back in the day. And we kept saying to each other, ‘Somebody will do that again, and that will be a huge hit.’ It didn’t really occur to us to do anything about it until I happened to mention it to Sue [Vertue, SHERLOCK series producer, who is also married to Moffat]. She said, ‘Well, why don’t you do it?’ We kept saying, ‘We will be really cross when somebody else does that.’ And then, like men, did nothing at all about it. Nothing. Absolutely nothing. Got off the train and wandered off. That’s sad and true. And then doing it. It was much more recent, the idea of doing a Victorian one, because we can.”

So what caused Moffat and Gatiss to do a Victorian-era episode after all? “Well,” Moffat jokes, “we checked the books and discovered we got it wrong. I said to Mark, ‘We should have read them first.’” More seriously, he continues, “Just because we can, really. Mark and I were having a fun day on set because he was doing some second-unit shooting with some evil monks. It was the prequel, and because I think we found an old prop that was on the original TITUS, we were having a geek day. Gosh, what a surprise. And then we just thought, why don’t we just do it? Why don’t we just do a Victorian one? We never bothered to explain what we were doing in modern-day London. So why do we have to bother explaining what they’re doing in Victorian London, when that’s where they’re supposed to be? So can we increase our normal run of three episodes to a record-breaking four, and do the special, which is separate from the rest of the series, and done in the correct period? So it’s a mistake we’ve been a long time rectifying. What can I tell you?”

Moffat adds that SHERLOCK is unlikely to return to the Victorian era after this. “Next one is going to be set in a starship. Because we take so long to make the show, we’re going to have to set it in the next century. No. Really, this is a one-off, unless we go mad and decide on setting it in the 1940s and have them fight Hitler. Nothing is inconceivable if you have no taste. But no, this is, we go back to doing the show normally next year – unless I’m lying, or we change our minds.”

One subject Moffat seems unlikely to change his mind about is the British government’s threats to make major cuts to the BBC. “I think what’s going on is outrageous,” he says. “It’s absolutely terrible and wrong and ill-conceived. It staggers me that we have got a government that got elected and decided that the main problem with Britain is our national broadcaster. Does anybody think that? Does anybody look at Britain [and think], ‘They were brilliant with everything. It’s just their television is s**t. Let’s sort out the BBC.’ [The government] must have something more important to do. I think the trouble is, it’s an oddity, the BBC, to say the least. It’s an extraordinary oddity that it is so good. They have a national broadcaster that is that amazing. The ambition that the light that was turned on all those years ago, that switch reels on us today is an extraordinary think. If we switch it off, we won’t know how to put it back on again and everything, television everywhere, broadcasting everywhere, will be less good. You’ll find the biggest fans of the BBC in broadcasters, because the BBC has been a beacon and an anchor. To damage that for political gain is vandalism of the worst kind.”

Back to the more cheerful topic of SHERLOCK, Moffat says that there’s a spectral element in the latest episode, but that’s not what demanded the most from the special effects department. “[It’s] not so much the ghost story aspect as making it Victorian. It was like doing DOCTOR WHO anyway, because we had to make a CGI London.”

In terms of crafting an episode of SHERLOCK, Moffat relates, “The mystery isn’t usually what we start with. It’s usually what happens to him. It’s usually an emotional project, disguised as a detective show. I never really think of the originals as mystery stories, I think of them as adventures. And that’s what Doyle got right. These aren’t puzzles that you unravel, it’s an adventure, with creepy bits and hero moments. That’s what’s different about it.” He adds that he has an appreciation for the recent SHERLOCK HOLMES films starring Robert Downey, Jr. “I like those ones. I think they’re great. I think that was a really good way of remodeling [the stories].”

Asked about how he schedules his time writing and producing both SHERLOCK and DOCTOR WHO, Moffat expresses dismay. “Badly. Very, very badly. It’s just hell. It never works out. Because my schedule isn’t uppermost in even my mind. It’s when we can get Benedict and Martin, and when we’ve got to get DOCTOR WHO on air, so I just sort of put up with whatever it is. I won’t talk about the schedule for a good reason. I can’t do my job if I’m in a state of panic. And the only thing that’s going to happen if I look at my schedule is, I’ll cry. It’s the only rational response. They [the BBC] once made me sit and have a SHERLOCK versus WHO schedule meeting in this club somewhere. And there was a bottle of wine sitting in front of me and no one else was touching it. And they just talked about when I could write this and when I could write that, and I just drank the bottle of wine [until] it was empty. So it’s an ongoing nightmare. I’d like to be able to say I’ve ever been disciplined and clever about it.”

Given that Cumberbatch has recently played Hamlet, would that actor reading Moffat’s schedule in iambic pentameter be the producer’s idea of a classic tragedy? “I’m sure he’d make it sound lovely,” Moffat says. “Which it isn’t.”