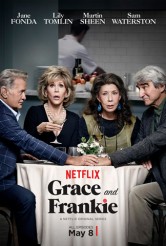 In Netflix’s GRACE AND FRANKIE, now streaming its full thirteen-episode first season and preparing for its second, Jane Fonda and 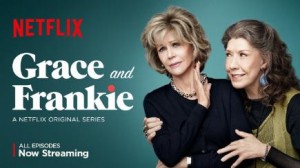 Lily Tomlin star as the title characters. Grace is very uptight and Frankie is very free-spirited. The two have baffled and tolerated each other for decades because their husbands, Grace’s Robert (Martin Sheen) and Frankie’s Sol (Sam Waterston), are law partners. It would be an understatement to say that Grace and Frankie – and their grown children – are thrown for a loop when Robert and Sol announce that they’ve been in love with each other for twenty years and leaving their wives in order to marry one another.

Then, perhaps even more unexpectedly, Grace and Frankie begin to bond with one another as friends, while at the same time developing different relationships with their ex-spouses.

Marta Kauffman, who co-created GRACE AND FRANKIE with Howard J. Morris, is a television comedy veteran. Series she has created or co-created include DREAM ON, VERONICA’S CLOSET and FRIENDS. GRACE AND FRANKIE, however, is the first time she’s worked with a streaming service.

AX: As you work with your actors more and more, do you start to write more toward the way they play the roles?

AX: GRACE AND FRANKIE deals a lot with gay issues, and Lily Tomlin has been very involved with LGBT issues for decades. Does she ever give input on that specifically with any of the scripts?

KAUFFMAN: We have a [writers’] room with two gay men, two gay women, and they’re always part of the thinking process. I can’t say that I’ve experienced all the issues, but I understand them, having experienced being a woman in the business, or being Jewish – you do experience what it’s like to feel like an outsider. There was only one moment that she felt uncomfortable with, and she told us and we changed it. And I can’t remember what it was now.

AX: Martin Sheen has said there was something that he was uncomfortable with, having to do with a sexually explicit party ornament …

KAUFFMAN: Yes. And you know what? I get it. When he said it, I went, “These men are a little different than the ones we had in our heads.”  [The characters] are both very elegant, well-respected men and I understood why they didn’t want to be part of that. I got it.

AX: What did you originally think those characters would be like?

KAUFFMAN: I thought Robert was colder, I thought Sol was a little tougher, and I didn’t know how much we would care about their relationship. I had no idea. But [Sheen and Waterston] brought that.

AX: Were you concerned that the long-term infidelity might make Robert and Sol unsympathetic?

KAUFFMAN: No, because it’s real, and it happens, and because [the actors] so good, you didn’t hate them. And because they’re gay. It’s not that they were just f**king around. They had something they felt that they couldn’t express externally, so they just kept it amongst the two of them. I think that automatically is sympathetic.

AX: All the characters have sex lives. Do you feel like you’re striking a blow for older people’s sexuality with GRACE AND FRANKIE?

AX: In terms of, well, here are these presentable people who all find each other desirable – you don’t very often see that directed at people who are seventy.

KAUFFMAN: And I’ve had people tell me they think it’s kind of gross.

AX: Given that they both deal with people of a certain age, do you think GRACE AND FRANKIE is comparable to GOLDEN GIRLS?

KAUFFMAN: Hopefully not. Because that wasn’t really about people having sex. That was about people talking about f**king. Those people, they were sassy, but it wasn’t real what it is when you’re this age and you’re so marginalized, what is it to be desired? What does that mean? How does that feel?

AX: To ask a question about reminding the viewers of what’s happening, when you’re streaming on Netflix, does that free you from having to do dialogue recaps of “previously on GRACE AND FRANKIE,” because all the episodes go up at once, or do you still have to mention plot points from earlier episodes?

KAUFFMAN: Once in a blue moon, we’ll do that if there are enough episodes in between, but if it was the previous episode, we won’t do a whole reminder of it, we’ll just keep moving forward.

AX: Do you have spoiler issues, because some people may binge-watch the whole thing and Tweet about it, while others are at a midpoint in their viewing?

KAUFFMAN: I know what you mean. People go on Twitter and say, “Oh, my God, the this thing or the that thing …” [But] I haven’t seen it to be a problem.

AX: Was there any episode in the first season that you heard from fans was a favorite?

KAUFFMAN: Hmm. I’ve heard a lot about the birth in the sweatpants, which actually happened to our costume designer. She literally gave birth in her sweatpants, and we were like, “Oh, my God, we have to do that.” We heard a lot about that. Oh, the dry vaginas, everybody talks about the dry vaginas and the lube, but more than anything, people responded to the two sets of relationships. That’s what people caught onto. People don’t talk about it as episodes. They talk about the stories and the characters.

AX: Is there a Season 1 episode that you view as a turning point?

KAUFFMAN: Yeah, the one that was [at] the hospital, the one where [Grace and Frankie begin to realize they depend on each other]. That was the one where it really changed.

AX: How pleased are you with the response to the show?

KAUFFMAN: It’s gotten a much wider audience than we expected, it’s gotten a younger audience, in addition to the older audience, it’s got a big LGBT audience – we couldn’t be happier. And every once in awhile, we go on and see what is trending on Netflix, and for a period there, we were Number One. It was really exciting. We all [initially] thought, “This is for the over-sixty set,” and it’s much wider.

AX: How do you plan out the season?

KAUFFMAN: The first thing we do is come up with what’s the arc for the season. Where do we want to start, and where are we going to finish? And then it’s, how do we get there? And there comes a point in the season where the season tells you what it wants. You are no longer in control, you’re now on the train. And the train moves in a certain direction, because things happen, and when you cut something, it’s a little different than when you wrote it, it starts to tell you what it wants to be, and who the characters are.