Home » Supernatural Into the Mystic Review 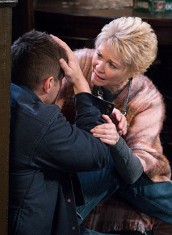 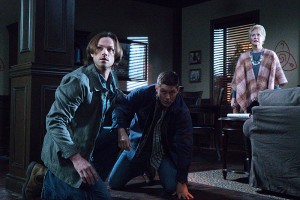 SUPERNATURAL, should it need saying, doesn’t have the most fabulous track record with female characters. The Season 11 episode “Into the Mystic” can’t on its own compensate for all that, but it at least passes the Bechdel test some of the time, with two guest women, Aileen (Shoshannah Stern) and Mildred (Dee Wallace), conferring over how to take out a banshee when they’re not both admiring Dean (Jensen Ackles) and Sam (Jared Padalecki).

Sam is having unhappy flashbacks to being reminded of his many failures by Lucifer. Dean doesn’t know what’s wrong with Sam, but a case cures all ills and there’s one close to home – a mysterious death at a surprisingly nice retirement home fifteen minutes down the road from the Men of Letters headquarters. The culprit turns out to be a banshee. (We learn that there are two kinds of banshees, good and bad. The bad ones use their shrieks to drive people into bashing their own heads in and then feed on the exposed brains.)

Sam discovers that Aileen, the retirement home’s young deaf cleaning lady, is a Hunter who’s been tracking the banshee her entire life, ever since it killed her parents when she was a baby in Ireland. Meanwhile, retiree Mildred witnessed the banshee’s most recent kill and may be the next victim, since the lore says that banshees attack “the vulnerable.” Mildred does not let fear get in the way of her flirting outrageously with Dean, who is mellow in his response to the older woman’s cheerful advances.

When Dean heads back to headquarters to pick up some anti-banshee weapons, he finds Castiel (Misha Collins) turning the place upside-down. We know, though Dean does not, this is really Lucifer using Castiel as a vessel. Lucifer/Castiel coaxes Dean to talk about Dean’s strange inability to kill Amara/the Darkness when he’s had the chance – there’s some sort of connection there. Dean gets “Castiel” to promise not to share this with Sam. No worries there.

The banshee actually attacks Dean rather than Mildred. With Sam knocked across the room, teamwork by Mildred (who uses her blood) and Aileen (wielding a golden knife) vanquishes the monster. Aileen hits the road for further Hunting adventures, though Sam says she’s welcome at any time. Dean accepts some advice from Mildred, who tells him to follow his heart.

Back at the Men of Letters headquarters, Sam finally tells Dean what’s been on his mind, namely that he feels horrendously guilty for not trying to rescue Dean from Purgatory a few seasons back. Dean tells Sam not to worry about it. And then neither of them can sleep.

Although much of “Into the Mystic” is monster of the week, it’s a good one. It’s still a kick to see Collins doing his witty and wily take on Mark Pellegrino’s Lucifer, and the actor looks to be enjoying the change. In terms of taking care of old business, it feels like the right time for Sam and Dean to have a chat about Sam’s uncharacteristic lack of brotherly panic over Dean’s whereabouts during the Purgatory stint. Actually, that still seems so bizarre that a short chat doesn’t really cover it, but at least the topic is addressed.

Kudos to SUPERNATURAL for not only casting genre icon Wallace and powerful Stern, but for letting them portray people who rise to the occasion. It looks as though Stern may return, which would be a welcome development.