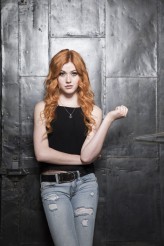 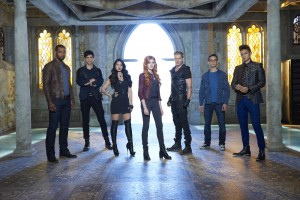 Freeform Network, formerly ABC Family, has brought Cassandra Clare’s best-selling urban fantasy series THE MORTAL INSTRUMENTS to Tuesday night television as SHADOWHUNTERS: THE MORTAL INSTRUMENTS. In SHADOWHUNTERS, Clary Fray (Katherine McNamara) learns that she has angelic blood and must join with other supernatural beings to fight demons in order to rescue her kidnapped mother.

Executive producer Ed Decter (UNFORGETTABLE, THE CLIENT LIST, IN PLAIN SIGHT) adapted SHADOWHUNTERS for television. He talks about his supernatural series, its characters and more.

AX: You’ve written some novels yourself – the OUTRIDERS and CHLOE GAMBLE series. Do you have any mixed feelings about adapting somebody else’s books, rather than your own?

ED DECTER: No. I respect the form so much and obviously, I think my books sold a total of 40,000 copies and Cassandra’s sold 40 million. Actually, I think that makes me super-respectful of her material.

AX: There are a lot of different characters with a lot of different storylines in SHADOWHUNTERS. Does keeping track of all the storylines pose a challenge, or does that give you some freedom to go, “Well, if we’re stuck here with this storyline, why don’t we go over there to that storyline and then come back to this one when we’ve figured the other one out?”

DECTER: Well, and I think even Cassandra was very upfront about this – when she wrote the books, she didn’t have certain things mapped out as clearly as she would have liked to in the later books. So she clarified some things for herself in the later books, so we were very happy to use that clarification sometimes earlier. But we don’t jump the giant story points ever.

AX: You were also one of the writers/producers on HELIX. So do you depict horror differently in SHADOWHUNTERS than you did there?

DECTER: Yes. HELIX was a viral, almost zombie kind of thing, and this is not as horror as that. But we do some scary moments, we do some, I would say, verging on the gruesome sometimes, but not in the same tone as HELIX, which was straight-out horror.

AX: For your creature characters and transformations, do you have prosthetics or do you do CGI?

DECTER: We do prosthetics as much as we can, and then we enhance them with CGI.

AX: Before you got involved with SHADOWHUNTERS, were you a fan of any of the sorts of creatures that are in this show, like vampires or werewolves or the Nephilim?

DECTER: Sure. I always loved vampire movies and I’ve always loved werewolf movies, and then it was really exciting trying to visualize – Cassandra describes the demons, but not in such detail that you have to design them that way, so it was so much fun to be part of the creature development of the show.

AX: There are some other shows on right now that deal with angels and demons. Are you paying attention to them at all, in order to avoid what they’re doing, or just not looking at them?

DECTER: No, we’re trying to keep our sense of ourselves and not looking too much – because, by the way, if you saw twenty vampire movies, there will be transformations into vampires that look like yours, and some that won’t, and werewolf transformations is a big thing. So we’re definitely trying to make our own language for those things.

AX: Where do you shoot SHADOWHUNTERS?

AX: Does the show take place in New York?

DECTER: Oh, it absolutely takes place in New York, and we’ve gotten some great footage in New York, some beautiful shots of New York, that help us sell that. And then we’re actually hoping to move the show to Vancouver, because the second season, a lot of it takes place in Idris, and we need snow-capped mountains and beauty and things like that, which we don’t have in Missisauga, even though Toronto is very nice.

AX: How big is the SHADOWHUNTER writers’ room?

DECTER: We have seven writers on staff, and we have two other executive producers, Michael Reese and Marjorie David, who are super-experienced, and then we have a bunch of young, terrific writers who really love genre writing.

AX: Can you talk about the directors you’ve hired? You’ve got some genre heavy hitters on board …

DECTER: Well, of course, we hired McG [who is one of SHADOWHUNTERS’ executive producers] to do the premiere, and he designed so much of the look and the world of the show. And then we hired just phenomenal directors that work, like Mick Garris, and a lot of them have worked in the genre before, and they each brought something really special to their episodes, and really made them their own, which was what we’re excited about.

AX: Freeform seems to have a mandate to go somewhat younger than regular ABC Network – how do you keep the balance of making it for a younger audience, but not excluding genre fans, who come in all ages, shapes, sizes …?

DECTER: Exactly. Well, ABC Family had a mandate to be a little younger, and I think part of the transformation to Freeform was, they said, “We need to get older.” And they’re not shy – they’ll have gory things, they’ll have adult things. I mean, we have very adult stuff going on in our show. When I said to them, “We’re going to sort of DARK KNIGHT the material of MORTAL INSTRUMENTS,” they said, “Bring it.” They were really excited about it. We aspire to do what Christopher Nolan did to the Batman franchise. We aspire to make it a little darker, sexier, a little more unexpected.

AX: Are there characters who are surprising you in their transition from page to screen?

DECTER: Yes. I mean, the Isabelle character [played by Emeraude Toubia], she’s written when you first meet her as kind of a sexy, provocative character, and she makes a transformation in the books, and I think people will be really, really surprised that Emeraude Toubia really embraces that arc. I find her growth super-spectacular and a must-see.

AX: Isaiah Mustafa, who plays police detective Luke Garroway, came to fame as the man everyone wanted to smell like in those Old Spice ads. Did that play a part in why you cast him?

DECTER: No, he absolutely wasn’t cast because he was the Old Spice guy. I mean, we noticed it – when he came in for the interview, we said, “Oh, my God, it’s the Old Spice guy.” But that’s not why he was cast. He’s a really fine actor, and really a stabilizing force, because he has to be sort of the father figure to the Shadowhunters, and it’s a very challenging role. And he has to be another creature. So we’ll see how he does with the transformation. But he had to be a physical character, too.

AX: What would you most like people to know about SHADOWHUNTERS?

DECTER: That it is an accessible fantasy. It is a fantasy where all the legends are true, so that you’ll be able to find the fantasy that really excites you within our storytelling.

This interview was conducted during Freeform Network’s portion of the January 2016 Television Critics Association press tour in Pasadena.