Double-entendre title for a decent episode 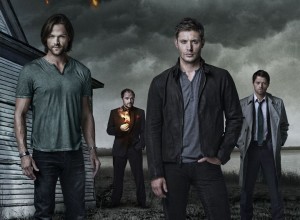 It had to happen sometime. Sam (Jared Padalecki) and Dean (Jensen Ackles) were bound to realize at some point that their angel friend Castiel (Misha Collins) is actually being occupied by Lucifer. Sooner or later, any show that has time travel has to have a story set on a U.S. Navy submarine during WWII, so SUPERNATURAL Season 11 does that as well in “The Vessel.” So we’ve got Castiel as the vessel for Lucifer and the sub for … well, a seagoing vessel.

In Nazi-occupied 1943 France, Woman of Letters Delphine Seydoux (Weronika Rosati) seduces and stabs a German officer in order to get her hands on a mysterious object. Later, the aforementioned U.S. sub is ferrying Delphine and her find to safety.

In trying to combat Amara, Sam finds a record of all this. The sub sank, but apparently the object aboard was the Hand of God – something God actually touched. Since God is still nowhere to be found and Lucifer (so far as Sam and Dean know) is still caged in Hell, Sam thinks this artifact could help against the Darkness.

In Hell, Lucifer, in Castiel’s body, is really bored. He’s got Crowley (Mark A. Sheppard) chained up like a dog. When they’re alone together, Lucifer notes that Crowley still harbors ambitions of ruling Hell again, and Crowley observes that if Lucifer could fight Amara, he’d be out doing it. Then Dean calls.

Castiel can travel through time, though since his angel power is low, Sam and Dean fear for his well-being. Since Dean can’t kill Amara, he feels that he should be the one to go on the sub to get the object. He wants Sam to remain behind. Sam objects, but “Castiel” promises not to let Dean out of his sight.

Oops. Delphine has put wards on the sub, so human Dean gets on, but “Cass” is left outside the hull. He returns to the Men of Letters headquarters, where Sam tries to find a spell that will let “Cass” back onto the sub so that he can bring Dean and the object back. Lucifer of course really wants the Hand of God, whatever it is.

Dean finds Delphine on the sub and is able to quickly convince her, and Petey (Grant Harvey), the crewman who is protecting her, that he’s a Man of Letters from the future. The object is actually the Ark of the Covenant (yes, they name-check RAIDERS).

The trouble is, the submarine is going to be sunk. They can’t tamper with the past. Delphine’s very body is warded, so she wants Dean to kill her so that he can get the Ark back home. But before Dean can do this, the sub comes under attack from a German ship – commanded by Delphine’s not-so-dead ex. He and his crew have supernatural abilities.

Back at the Men of Letters, Lucifer gives himself away to Sam, who realizes what’s happened. Then Lucifer concludes he doesn’t really need Sam and tries to kill him. Castiel asserts himself and won’t let Lucifer do it. Castiel is temporarily in control. Sam tries to convince Cass that they don’t need Lucifer, but Castiel thinks maybe they do need him to save Dean.

Well, no, they don’t. Delphine puts her hand on the artifact, channeling its power. She blasts Dean back to his own time. Lucifer grabs the artifact, but it doesn’t work. Its power apparently could only be used the one time. While Lucifer is busy with the Ark – which looks like a piece of petrified wood – Sam uses his blood to draw wards on the walls, so that Lucifer-in-Cass disappears.

Later, Dean and Sam resolve to find and rescue Cass. Dean is dismayed that he was simply there to bear witness to the sacrifice of Delphine and the Navy crew. Then it turns out that the power of the Ark blew a hole through the German destroyer and sent it to the bottom of the ocean. So Dean’s presence actually wiped a few supernatural bad guys off the playing field after all.

SUPERNATURAL does play the guest-characters-who-find-out-they-must-die-for-the-greater-good card rather a lot, but at least in “The Vessel,” the leads don’t have to take actions they feel especially guilty about, and nobody sulks. The arc with Lucifer proceeds in entertaining fashion. The Devil gets to refer to Castiel (while in Castiel’s body) as “the grim face of angelic constipation,” which wins as the best line here. As far as the standalone aspect goes, the Ark of the Covenant is as solid a pop mythic basis as it gets. Well done, team.