Crowley’s back, the boys are just working 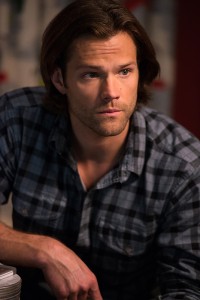 The SUPERNATURAL Season 11 episode “Beyond the Mat” has it both ways – it’s a perfectly good procedural with the boys, while moving the plot forward with ex-King of Hell Crowley (Mark A. Sheppard) and current down-under ruler Lucifer (Misha Collins).

On the more or less standalone side, Dean (Jensen Ackles) proposes that he and Sam (Jared Padalecki) attend the funeral of a wrestler. “The Hangman” actually died in supernatural circumstances, but the Winchesters don’t know this, only that the wrestler was one of Dad’s favorites, and the source of a rare shared happy childhood memory. Since all of their research is turning up nothing on how to rescue Castiel from Lucifer possessing his body, or how to stop the Darkness, or much of anything else, Sam agrees.

After the funeral, where Dean fannishly gushes all over his wrestling idol Gunner Lawless (Aleks Paunovic), a man attending the memorial wrestling match is found dead with runes carved into his body. Now Sam and Dean suspect there’s a case here after all. Lawless sold his soul to the demon Duke (Aidan Kahn), who has been making the wrestler kill for him. Duke ultimately can’t force Lawless to kill Dean, though. When Duke tries to kill Sam, Gunner ganks the buyer of his soul. Sam and Dean cannot save Gunner from being ripped apart by hellhounds, the fate (as Dean knows all too well) of humans who make trades with demons.

In Hell, Lucifer (still in Castiel’s body) tells his minions that he wants them to find him another Hand of God, as the last one’s power was spent in one go. Lucifer is still tormenting and humiliating Crowley. However, Lucifer’s right-hand demon Simmons (Bethany Brown) offers to break Crowley out, telling him that some demons support him and not Lucifer.

Free of Hell, Crowley and Simmons go to Crowley’s locker where he has a secret stash of artifacts. One of these goodies is the Staff of Aaron, aka another Hand of God. Sure enough, Lucifer shows up – he had Simmons trick Crowley into leading them to the treasure. Crowley, however, is also pretty tricky, getting his hands on the Staff before Lucifer can do anything about it. The Staff powers up Crowley, and he zaps Simmons – but, like the Hand of God before it, the Staff is only good for one jolt. Crowley escapes, leaving Lucifer empty-handed.

“Beyond the Mat” is notable for some of its grace notes: Dean, alone in the wrestling ring, going through his moves; some agreeable Winchester brotherly reminiscing; Dean waxing philosophical on how he has to believe that it’s never too late to rise above the worst mistakes and try to do the right thing. It’s all good, and pitched just right.