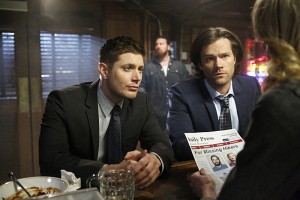 First of all, congratulations to SUPERNATURAL for finally hiring a woman, Nina Lopez-Corrado, to direct an episode. More to the point, congratulations to Lopez-Corrado for demonstrating that it’s never too late in a show’s run to have some effective horror imagery. In the SUPERNATURAL Season 11 episode “Red Meat,” when a newly-made werewolf begins a brief reign of terror at a hospital, there’s no concern that we may have seen this or that before. The director goes for the creepy and gets it.

“Red Meat” references previous episodes as far as recurring character Billie (Lisa Berry), a thoroughly fed-up Reaper who is very angry that Sam (Jared Padalecki) and Dean Winchester (Jensen Ackles) not only killed her boss Death, but also unleashed the Darkness upon the Earth. Even though the brothers have individually and jointly come back from the beyond many times before, Billie has sworn that the next time they die, they’ll stay dead. More, they won’t go to Heaven, Hell or Purgatory – she’s going to throw their souls into “the Empty.”

It would therefore seem to be very bad news when Sam gets shot in the gut by a werewolf that he and Dean are trying to kill. There are a pair of humans, Michelle (Erin Way) and Corbin (Blair Power), shackled in the cabin. Dean does emergency surgery on Sam, which doesn’t seem to help very much. He also unchains the couple, who say that the werewolves can transform during the daytime.

Corbin wants to make a run for it. Seeing that Dean is highly capable, Corbin wants Dean to lead the way out through the woods. Dean, of course, won’t leave Sam behind. Dean goes outside to find something that he can make into an impromptu stretcher for her brother. While Dean is gone, Corbin – arguing that he’s doing it to save Michelle – suffocates Sam. When Dean returns (in what seems to be a continuity error, he doesn’t have much in the way of stretcher construction materials with him), Corbin says that Sam simply passed away from blood loss.

Dean finally agrees to lead the couple to safety and then come back for Sam, but before they get very far, they are found by a park ranger. When Dean refuses to go with the ranger, the ranger tries to force him. Dean decks the ranger; the ranger tasers Dean.

Dean wakes up in the hospital, shackled to the bed. Michelle is there as well. Dean thinks he knows how to save Sam. He convinces Michelle to get him free of the bed, then takes an overdose, instructing her to fetch the doctor to try to revive him.

Meanwhile, Corbin examines himself and finds that he’s been bitten. Sam, alone in the cabin, wakes up gasping.

Still thinking that Sam is dead, Dean gets Billie to come to him. He begs her to let Sam come back to the world. Billie says there is no way she’d let Sam go once she’d reaped him, so Dean’s plea is in vain. Furthermore, Sam isn’t even dead – but Dean is, and she’s here to reap him. Now knowing that Sam is alive, Dean responds to attempts to the doctor’s revival efforts and survives the overdose.

Another werewolf attacks Sam in the cabin, but Sam prevails. A semi-wolfed-out Corbin kills the doctor and a cop, then tries to turn Michelle. Dean wrestles with him and Sam arrives at the hospital just in time to kill Corbin before he bites anybody.

Sam finally gets the medical treatment he needs for his gunshot wound. Dean tries to comfort Michelle, who says she’ll never get back to normal.

When Sam and Dean are back on the road, Sam asks Dean what he did when he thought Sam was gone. Rather than recount what actually happened, Dean says he knew Sam wasn’t dead.

SUPERNATURAL ultimately lives and dies on the Winchester brotherly bond, and it’s at full throttle here. “Red Meat” finds a new way to spin it, and Ackles manages to pull off his dialogue as though Dean has never tried to sacrifice himself for Sam before. Bonus – nobody is sulking. There’s also some relatively realistic drama when Corbin puts his hands over Sam’s face; we’re pretty confident Sam will be back, but it’s still disturbing.

However, what’s really fun here is the stuff that recalls THE HOWLING. Corbin’s clawed hand gripping a doorway and bodies being dragged around hallways are the kind of scary flourishes that SUPERNATURAL still delivers in its best moments.