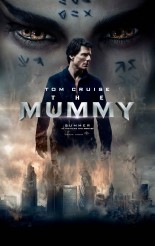 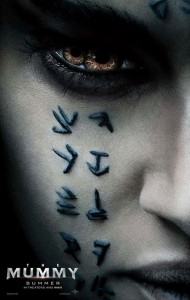 THE MUMMY isn’t a remake of the ‘30s Boris Karloff version, the ‘50s Peter Cushing edition or the ‘90s/’00s trilogy starring Brendan Fraser. It has its own mythology and its own look, both of which are very strong. The two big problems here are first that this MUMMY doesn’t know how to lay out its narrative so that there’s a sense of momentum, and second, it tries way too hard to be fun.

In THE MUMMY, a voiceover, courtesy of Russell Crowe’s character Henry, introduces us to Egyptian princess Ahmanet (the spirited and game Sofia Boutella). Ahmanet starts out as a warrior happy in her knowledge that she will inherit her father’s throne. Then the Pharaoh begets a male heir, displacing Ahmanet. In her rage and disappointment, she enlists the Egyptian god of death Set, then commits some acts so dark that she is condemned to be mummified alive buried far from Egypt, in Mesopotamia.

Five thousand years later (i.e., now), Mesopotamia is known as Iraq, and U.S. troops are trying to fight terrorists who are intent on destroying historic sites. Enter Nick (Tom Cruise) and Chris (Jake Johnson), two American soldiers who are also black market antiques dealers. When an airstrike uncovers a previously buried tomb with strange wardings all over it, Nick is eager to investigate. So is Jenny Halsey (Annabelle Wallis), an archaeologist who is annoyed both that Nick left their one-night stand without saying goodbye and that he stole a map from her in the process. No guesses on whose tomb this is.

The effects are consistently impressive and flow throughout THE MUMMY. No one who came to see skeletons scuttling about or imaginative, weird statuary or lots of enormous explosions will feel cheated on that score. The mythos surrounding Ahmanet has resonance and Boutella is terrific in all aspects of her complicated role.

However, director Alex Kurtzman and screenwriters David Koepp and Christopher McQuarrie and Dylan Kussman, working from a screen story by Jon Spaihts and Kurtzman & Jenny Lumet, can’t settle on a tone. They want to be scary and fun and don’t fully manage either. The mood is too light for dread, yet the jokes never quite land right.

In setting up Universal’s Dark Universe series of films (this is the first entry in the planned franchise), THE MUMMY tries to cram in a few too many elements. We find out some things about Crowe’s Henry that seem like they’ll be pertinent in later films, but don’t add anything to the plot here. On the flip side, some of what happens depends on Nick’s underlying strength of character, but he’s presented as so slick and reckless at the outset that there isn’t enough time for him to develop into a hero. When he develops a conscience, it happens with such speed and so little reflection that there seem to be scenes missing. Wallis gives a perfectly good performance, but her character is underdeveloped.

It all builds to a finale that is clearly meant to resonate with tragedy, romance and anticipation. For it to work that way, it would need a lot more character development than we get. In turn, we don’t have the kind of emotional investment needed for the payoff.

However, all is not lost. THE MUMMY keeps things moving, and there’s scarcely a frame that’s not an imaginative eyeful. It’s moderately entertaining, but it’s never engrossing.