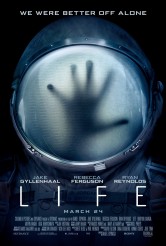 ALIEN by any other name … 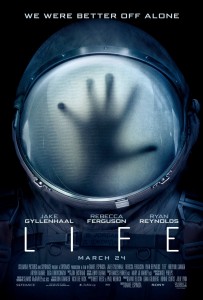 The new movie LIFE has a very obvious ancestor. That would be 1979’s ALIEN. There is no shame in following in that movie’s viscera trail (this reviewer challenges anyone to come up with an exact accurate number of how many have tried), so long as it’s done well.

LIFE indeed is done pretty well, though it’s got a couple of confusing action sequences and, surprisingly, no jump scares. Director Daniel Espinosa trusts the sweaty, freezing, icky tension of the situations to fuel fear.

Set almost entirely aboard the (real-world orbiting institution) International Space Station, LIFE concerns what happens when a team of scientists get hold of some soil samples from Mars that turn out to contain, well, the title element. Microscopic at first, the organism, dubbed “Calvin,” grows in twenty-five days to about the size of an ant, if ants were translucent, flexible blobs. Then things take a turn.

We get to know the team a bit, though with the exception of new father Sho Kendo (Hiroyuki Sanada) and space-loving Dr. David Jordan (Jake Gyllenhaal), they’re mostly defined by their dedication to their work. There are moments of fun, largely provided by Ryan Reynolds’ resident smartass Roy Adams, and some moments of warmth, but the point here is very much a finite group of people trying to outwit a very resourceful, dangerous alien. Ariyon Bakare is notably touching as the biologist who deals most closely with Calvin in the early nurturing stages. The women in the cast, Rebecca Ferguson, as the ship’s officer in charge of security, and Olga Dihovichnaya, as the mission commander, are both very good, but their roles are noticeably underwritten.

In some respects, LIFE tries to play things as straight as possible. In the script by Rhett Reese & Paul Wernick, none of the perils are created by treachery or ineptitude, just by humans initially underestimating Calvin’s durability, growth and intelligence. It’s always refreshing to see a movie where the plot doesn’t depend on somebody doing something appallingly stupid or selfish. This alone puts it ahead of a lot of the competition.

There are a couple of weirdly staged action sequences where it’s hard to figure out exactly who’s trying to do what (we appreciate that things are chaotic, but we ought to be able to figure out what the characters are trying to achieve). Calvin’s design is intriguing and different enough from other movie creatures to be noteworthy, both in appearance and movement. It’s a credible new life form, similar to but not imitating some terrestrial marine species, and it is expertly executed.

If one wants to take a meta-view of LIFE, it does seem to be making an anti-science argument. However, it doesn’t seem to have much agenda beyond presenting us with an interesting hostile alien and the resulting havoc. LIFE is not likely to shake up anybody’s view of anything, including post-ALIEN space horror, but it works well enough as a genre entry that doesn’t try to reinvent the wheel.