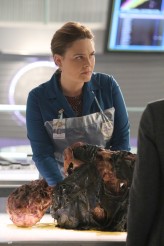 The original cast member talks his return to the series 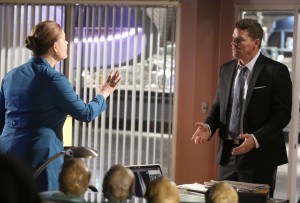 Eric Millegan was a regular of BONES as Dr. Zack Addy when it premiered way back in 2005. He was with the series through 2008, when Zack fell under the sway of a serial killer known as Gormeghon. Zack was thought to be guilty of killing a lobbyist and sent to a mental institution.

Since then, Millegan has made two guest appearances as Zack, in 2009 and 2010. Now that BONES: THE FINAL CHAPTER is here, Tuesday nights on Fox Network, Millegan and Zack are back. Zack’s colleagues at the Jeffersonian, led by Hodgins, are determined to prove his innocence and secure his freedom.

ERIC MILLEGAN: That’s resolved by the end of the year. They all work very hard together to make it happen.

ASSIGNMENT X: How did you wind up coming back to BONES?

MILLEGAN: Literally, a year ago, I got an email from my agent, who was forwarding me an email from the [BONES] casting director, saying, “We want you back for two episodes at the end of Season 11.” They didn’t know yet there would be a Season 12. And I immediately emailed my agent back – “Holy crap!” And I ran down to the laundry room, where my husband was doing the laundry, and said, “They want to have me back on the show!” And then it wasn’t just that I got to be back on the show, but the way they brought me back on the show, making me the cliffhanger of Season 11 – how often do you get an opportunity like that? That was just incredible. And they wrote so well for me, and it was a great experience. I can’t believe it’s done.

AX: In coming back to BONES, what was the thing you found you missed most when you got back to it?

MILLEGAN: Just working with everybody, working with David [Boreanaz] as a director [of the Season 11 finale] and Emily [Deschanel] as a director [of the Season 12 premiere], back to back episodes, and then working with Ian Toynton, one of our longtime directors on the last episode I did, and honestly, I felt like I had never left. And even being here at this party [thrown by Fox Network for the Television Critics Association Winter 2017 press tour at the Pasadena Langham-Huntington Hotel], I feel like I’ve been doing this all along. And I’m staying at this hotel. I got in last night and I’m staying here.

AX: In the time that you spent away from Zack, did you ever think what Zack might be up to and how he might come back?

MILLEGAN: Of course! I always hoped they’d bring me back for the end, but I didn’t know how it would happen. But was I did know was that the character played by John Francis Daley, Sweets, I had confessed to him that I didn’t kill anyone. And then three seasons ago, [Sweets] was beaten to death. So nobody knew Zack’s secret. And I tweeted, immediately that night, “Now no one knows about Zack!” So I hoped they would play that out.

AX: So you’ve been exonerated, at long last.

AX: What else have you been doing for the past few years?

MILLEGAN: I have a cabaret show I do every four years, and then friends and family in Oregon, where I grew up, suggested I bring it there, so in 2013, I brought it there as well. And I ran a marathon – twice, actually. I ran the New York Marathon in 2015 and then just a couple months ago.

AX: So you’ve been working on getting physically, fit and the cabaret show is a combination of singing and life story?

AX: Do you write the music as well?

MILLEGAN: I don’t. But I did a world premiere of a song this year, which was really fun. But otherwise, it’s a lot of musical theatre and pop music.

AX: Are you mostly in New York now?

MILLEGAN: Yes. Well, I go back and forth. The first half of last year, I was back here in L.A. I have a permanent place in New York, so I always have that.

AX: And do you know what you want to do now – more television, more cabaret?

MILLEGAN: Well, I’ll always do my cabaret show every four years. That’s something I’ve done since 2000. I would love to do another series, that would be a blast, but my mind is open for theatre as well.

AX: Do people still come up to you on the street and go, “Zack!”?

AX: What has been the most gratifying part of being part of this for you?

MILLEGAN: Getting to act. I love acting, and any time I work on it, it reminds me of how much I do love acting. So that’s the biggest thing.

AX: And what would you most like people to know about BONES: THE FINAL CHAPTER?