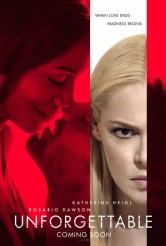 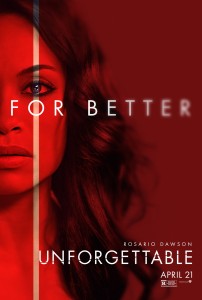 There are a few ripped-from-the-headlines aspects to UNFORGETTABLE, but to be specific would perhaps be too spoilery. Suffice to say that certain types of cyber-revenge make Christina Hodson’s screenplay plausible in its broad strokes. With different treatment, the subject matter could have been stomach-churning horror. However, under Denise Di Novi’s direction (the veteran producer’s feature directorial debut), UNFORGETTABLE is one of those glossy, silly thrillers that is nevertheless entertaining.

When UNFORGETABLE opens, Rosario Dawson’s Julia Banks sits in a police station, she is confronted with the facts. Her ex-boyfriend Michael (Simon Kassianides), a man she had a restraining order against years earlier, has been found dead in her living room. But why would she send sexy photos of herself and even undergarments and carry on an online correspondence with Michael after he had brutalized her? The look of shocked confusion on Julia’s bloodied face is such that we believe her protestations of innocence.

So what exactly has happened here? Flash back to six months earlier. Julia, a successful literary editor, is moving from San Francisco to Southern California to move in with her fiancé David Conover (Geoff Stults). David seems like a nice fellow who has left the world of finance to start a craft beer brewery. David also has a young daughter, Lily (Isabella Kai Rice); he shares custody with his ex-wife Tessa (Katherine Heigl), who is meticulously put together and very tightly wound.

Tessa at first tries to make nice with Julia – after all, Julia is taking care of Lily at those times Lily is over at David’s. However, there’s a lot of parental jealousy and personal insecurity bubbling right under Tessa’s manicured surface, traits only made worse by Tessa’s own judgmental mother (Cheryl Ladd).

It’s not too hard to guess where all of this is going, but the plot mechanics spin along well enough. The filmmakers have the sense to modulate one particularly tricky bit of business so that it’s not squicky.

However, if there’s a way of getting around the camp factor in an attractive, wealthy white woman becoming dangerously unhinged and doing things that are not only dangerous but counterproductive to her own interests, UNFORGETTABLE hasn’t found it. Heigl is fine when Tessa is being passive-aggressive, subdued or just mean, but there are some moments that are, well, hard to play.

There are also a couple of other weirdnesses. David comes off as so dense at times that we wonder why Julia is so invested in him (since Tessa is obsessive, her interest is just part of her pathology). For a man who is having custody issues, he also seems to leave his daughter with his girlfriend quite a lot. We’re in upscale California, not Oz – why does no one lock their doors? The police aren’t really the point here, but their reaction to certain incidents takes credulity over the red line.

Even so, Dawson is an empathetic central figure and for those who feel nostalgia for FATAL ATTRACTION (minus the animal abuse) or even relish Lifetime movies on steroids, UNFORGETTABLE scratches the itch. It also provides one answer to the question of who might commit a certain kind of news-making weird crime without being obnoxious about it.