Home » The Fate of the Furious movie review 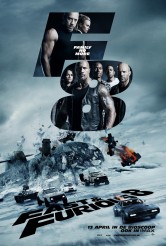 ©2017 Universal Pictures
THE FATE OF THE FURIOUS movie poster
Reviews

Movie Review: THE FATE OF THE FURIOUS

Some things nobody’s seen before 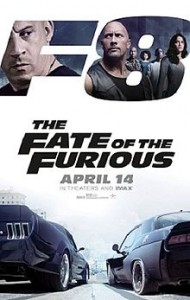 THE FATE OF THE FURIOUS movie poster | ©2017 Universal Pictures

Let’s start with one big selling point of THE FATE OF THE FURIOUS. It has an extended sequence, roughly midpoint, where director F. Gary Gray and his amazing stunt and vehicle team do things with vehicles that haven’t been done quite this way before. (It’s also liable to set sales of self-driving cars back, maybe way back.) On Movie # 8 in a franchise that depends on showing new ways to be fast and furious with all things automotive, speedy and crash-y, that’s no small feat.

Who would have thought way back in 2001 that THE FAST AND THE FURIOUS, a relatively little action movie about car thieves and street racing, would turn into a series so gargantuan that it has (in FATE) sequences set in Cuba, Manhattan, Iceland (standing in for Russia) and Cleveland, with nothing less than the fate of, never mind the furious, the very world at stake?

The franchise has flirted with this territory before, but this is perhaps the most sustained Bondian riff so far. Dom (Vin Diesel) and Letty (Michelle Rodriguez), finally on their honeymoon in Cuba (yes, it’s taken them all eight movies to get here), are having a great time. This is cut short when Dom is accosted by the mysterious Cipher (Charlize Theron), who has something on our normally tough hero that makes his eyes well up. Whatever it is makes Dom go against his long-trusted team, which includes Letty, Roman (Tyrese Gibson), Tej (Chris “Ludacris” Bridges), and more recent recruits Hobbs (Dwayne Johnson) and Ramsey (Nathalie Emmanuel). Soon government black ops guy Mr. Nobody (Kurt Russell) and his trainee Little Nobody (Scott Eastwood) have to send the rest of the team to stop Dom from doing Cipher’s complicated but potentially deadly bidding. Things are so desperate that Mr. Nobody adds a new player: Deckard (Jason Statham), the vengeful psycho that tried to kill everybody last time.

There are the “Wait, what?” moments that have become as much a hallmark of FAST & FURIOUS movies as spinning wheels. Shouldn’t Deckard be paralyzed? Shouldn’t another character be dead? Shouldn’t …? Oh, never mind. It’s what we’ve come to expect from these movies, and THE FATE OF THE FURIOUS zips along so briskly that we mostly just shrug and accept it.

The film deals with blessed respect when it comes to Paul Walker’s character Brian – the team has vowed to let him and his family leave the crazy FURIOUS world behind, come what may, and just because Dom has apparently gone rogue and there could be a nuclear war, that’s no reason to bother the guy. (If this seems a little naïve on the part of the characters, consider the options; this seems the most palatable.)

Theron appears to be having a blast as the inventive villain, and everybody else seems to be having a good time as well. Emmanuel gets some moments to shine, and Gibson and Bridges are allowed to tone it down a little, which makes them funnier and more agreeable. Johnson and Statham make an energetic double act. There’s also an uncredited cameo from a multi-award-winning performer that is, as they say, worth the price of admission.

Chris Morgan, who has written all but the first two FURIOUS films, has a good sense of what ought to be happening, and director Gray has some truly magnificent shots framing the awesome stunts. THE FATE OF THE FURIOUS is exactly what it’s supposed to be, and if that’s what you want, it’s a good thing.