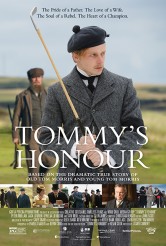 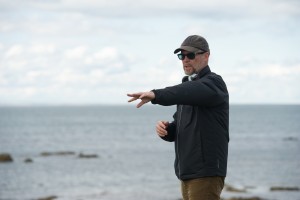 A father who is a master craftsman is eager to pass his wisdom on to his eldest son. However, the son, rather than follow in his father’s footsteps, longs to use what the father makes to blaze his own path.

In TOMMY’S HONOUR, this classic tale of family tension in Scotland is fact-based. The film won the BAFTA Scotland Award for Best Feature Film. Thomas “Old Tom” Morris, played in the film by Peter Mullan, designed fifty classic golf courses during his lifetime (1821-1908), as well as being a master maker of golf clubs. His son Tommy Morris, played by Jack Lowden, was not only seen as the greatest golfer of his time, but also arguably pioneered the concept of star athletes. Their story, replete with triumph, romance and tragedy, has come to the screen directed by Jason Connery, from a screenplay by Pamela Marin & Kevin Cook; Cook wrote the nonfiction book that is the basis for the film.

Connery, who spent much of his youth in Scotland, has directed four other feature films, but TOMMY’S HONOUR represents a new genre for him. He is also an actor, who still enjoys a cult following for his title role in the British series ROBIN OF SHERWOOD; more recently, he’s toplined VELOCITY and NIGHT SKIES. Speaking by phone from his home in rural New York, Connery talks about his work as director and producer on TOMMY’S HONOUR.

ASSIGNMENT X: Where and how did you find the story of TOMMY’S HONOUR?

JASON CONNERY: Jim Kreutzer [one of the producers of TOMMY’S HONOUR] had read the book. I hadn’t read the book. I knew the story of Tom Morris somewhat, in the sense that my little cottage in the Borders is about two hours’ drive from St. Andrews [golf course in Scotland]. Actually, I knew more about Tom Morris just being head grounds-keeper of St. Andrews and being at Prestwick. And I read the book, and I was just blown away by the story as a tragic element and a father and a son love story, really. And Jim Kreutzer said to me, “Would you be interested in telling the story?” I knew he was a hugely keen golfer, and I said, “Well, I would, but I want to tell you that I don’t think it’s a golf film, per se, I think it’s a family drama/love story/tragedy.” And he said, “Oh, okay.” And that was just the beginning.

Then [Kreutzer] said to me, “Well, Kevin Cook,” who wrote the book, and it was a highly successful book, “would like to have a shot at the script.” I was a bit worried, because I knew he wasn’t a screenwriter. But then I found out that his wife [Marin] was in fact going to help write, and she was very much a screenwriter, and not a particularly big golfer. [Marin] was great with all the drama, and [Cook] was wonderful for being able to check in with the consistency and the historical accuracy.

And then, having worked on the script extensively, it was all about putting the money in place. The lowest common denominator is always, “Oh, it’s a golf movie,” and historically, golf movies have been a hard sell. I have a theory about sports on the whole, not just golf, and that is that the thing that makes sports sort of incredible is the fact that it’s live. Drama-wise, anything can happen. So you can be watching a Super Bowl – nobody’s ever come back from ten points down at halftime, and the New England Patriots came back from twenty-three points. So that’s the excitement. But then you say, “Okay, everybody loved that so much, we’re going to do a film about the Patriots coming back from twenty-three points down at halftime.” And in essence, that’s dead, because the outcome of a film, in the context of doing it as not being live, is that the outcome is always the same.

So my determination on this film was not really to make it about the sport, as such, but the passion. [Golf is] definitely the backdrop of the film, and it’s definitely what the players playing it have a passion for it, but really, it’s a film about love and family and church and class and people, and the environment at that time. I determined not to make the outcome of the games the most important dramatic element to the film.

AX: Did you do research on your own independent of the writers? Was any of this stuff you knew just from having been in that environment?

CONNERY: Yeah. I mean, first of all, I’m a father, and I grew up on the golf course somewhat with my dad [actor and avid golfer Sean Connery], and I was educated in Scotland. I mean, obviously, I wasn’t around in 1866, but I did do quite a lot of research about how powerful the Church was in the local community, how the class system was structured. Every day, I had a quote above where I was writing, which was, “Every new idea starts as a blasphemy.” [In 1866], the American Civil War [had just ended], and the haute couture of France was arriving, and it was the beginning of the industrial age. So there was a lot of change going on, and I wanted to show in various different ways and forms, the change, the cycle of life, the wheel of life, without sounding too wanky, I hope, where you have Tom, who very much knew his place, and what he was being asked by the people in his environment.

And Tommy was always questioning that. I wanted there to be a sense of that [change], not only in the way he related to his friends and, indeed, his wife, but also, the idea of class and people and why one respected people and all of those things. And the Church, which was the kind of moral code – or certainly thought it was – of the time, and there was a hideous thing called “naming and shaming.” The Church would, if there was a woman, as in Meg [the woman Tommy loves, played by Ophelia Lovibond]. Tommy’s mother Nancy [played by Therese Bradley] talks about her being named and shamed in her church, where if a woman had a child out of wedlock, the man was never talked to or acknowledged, only the woman. The woman was basically put in front of the local minister, who sat her on a stool in front of the entire congregation and named and shamed her, and said, “She’s a whore and a hideous woman,” until he felt like he could then say, “You’ve had enough penance and you can now be clean again.” It was pretty hideous. And so all of those things made up the world of where they lived – that was my intention, was for the audience to be pulled into the world.

The other part of the research I did was into what could be considered period films. Quite a lot of them, I felt like I was looking in from the outside, and I wanted to film it from a perspective of actually being in the world, as opposed to the outside of it. So I shot it in a slightly modern way, and I wanted the boys – of course, I wanted to keep them period, but if you took them out of costume, they could be friends of today with each other.

AX: When you did eventually get financing, what was it you presented to the people that sold them on it?

CONNERY: Well, I’d like to have a shout-out for [executive producer] Keith Bank, who knew very little about making films. In fact, his only venture into film [prior to TOMMY’S HONOUR] was not a good one, but Keith Bank is a venture capitalist. And that’s how he set about raising money for the film. There are very different ways to raise money for films. But Keith pounded the streets, basically, and found a lot of people who he convinced that this was an important story to tell. A lot of them were avid golfers, but also some businessmen. So it was a great thing, because it was very much outside the normal box. When we would venture to the American Film Market and places like that, then the immediate [response] is, “Oh, the only way you’ll get this movie made is if you have a big star.” And they say that as though this is some news that we should be astounded by.

AX: Peter Mullan is a big star, just probably not in the way that they mean …

CONNERY: Right, exactly. But the lovely thing about having that money with people who were not used to being in the film industry was that, although there were still quite a lot of conversations to be had, I had worked with Peter [when both were actors in THE SHOEBOX ZOO], and from Day One, I said, “Look, this is the man to play Old Tom.” There was a lot of gnashing of teeth about, was he a big enough international name, and I said, “Look, I think that he will be magnificent, and I think that we will make a better film that more people will go to see because of his performance.” And from that moment on, we wanted the cast to be very authentic.

Jack I think is fantastic in the film, and he’s from the Borders, and I met with him, and he had a very good energy to play Young Tommy. He’s kind of cocky, but also incredibly real and a wonderful actor. And then we built the cast round them, and of course, Sam Neill, who’s a lovely actor and great to work with, has certain name appeal and value. Everyone all the way through the movie for me came and really immersed themselves in it and it was a great experience. I’m very proud of it, so I hope that people will go and see it.

AX: It seems that Tommy essentially pioneered the idea of exhibition golfing?

CONNERY: Yes. Tommy certainly realized his own value. Basically, he was the first sportsman to ever say, “Well, why am I only getting a few pounds, and you guys [the gentlemen promoters setting up the competitions] are getting hundreds, even thousands, of pounds, when everybody is coming to see me?” And so every professional athlete of today owes their moneymaking ability to him, because he said, “I want a piece of the action, because everybody is coming to see me.” So that’s true of him.

And he suddenly realized, “Why don’t we put the clubs in a quiver?” In fact, originally [the golf bag] was called a golf quiver, because the caddies used to just walk around carrying the clubs in their hands caddies. And also the whole idea of back spin and hitting down on the ball, and he was the first professional to get a hole in one. He had a swing that was quite different from a lot of others, and he used to break the shaft of the club quite a lot, because he would create so much torque going through the hickory shaft. And just stuff like that. He was very innovative and, as I say, he blew it up – “Why? Why does it have to be like that? Why can’t we change it?”

AX: To phrase this in a non-spoilery way, there’s a very important plot point with when Tommy is given a telegram. Is the timing on that true to what actually happened?