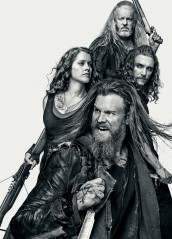 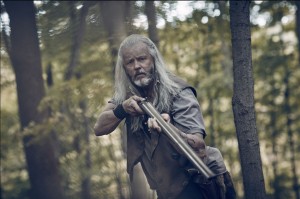 In WGN America’s OUTSIDERS, now in its second season on Tuesday nights, David Morse and Ryan Hurst play father and son, Big Foster Farrell and Li’l Foster Farrell. Both men are part of the Farrell clan, who live with their own customs and beliefs on Shay Mountain in the Appalachias, near the town of Blackburg, Kentucky. The Farrells have a lot of problems both within their own ranks – Big Foster murdered his mother (Phyllis Somerville) to become the clan leader, the Bren’in, only to have his younger wife G’winveer (Gillian Alexy) poison him and claim the position – and with the outside world below, especially a ruthless coal company.

At the beginning of Season 2, Big Foster is held captive by an especially strange family, while Li’l Foster ends up in a Blackburg prison. When the two men separately return to the mountain, they have changed in various ways.

Morse, originally from Massachusetts, had a stage career before playing Jack Morrison for six seasons on ST. ELSEWHERE. Since then, his film and TV career has encompassed projects including THE GREEN MILE, THE INDIAN RUNNER, THE GOOD SON, THE ROCK, TREME, DISTURBIA and CONCUSSION. Hurst, a native Californian, is a veteran of films, including REMEMBER THE TITANS and SAVING PRIVATE RYAN, and TV series, including the TAKEN miniseries, WANTED, MEDIUM and KING & MAXWELL. Hurst has also acquired a fan following for his years playing Opie Winston on SONS OF ANARCHY.

Seated together while eating lunch, Hurst and Morse exhibit a real-life camaraderie that is very different from the combative relationship of their OUTSIDERS characters.

ASSIGNMENT X: So Big Foster seems to be going through an enormous transition this season. Was that something you thought he was even capable of when you began doing the character?

DAVID MORSE: Well, when you read that character on the page in those first scripts that we got, no. You would never think that. And as that first season went along, G’winveer was always going to poison Big Foster. And as we went along, one of the things that Gillian and I discovered was, once we became intimate, it really was changing things between us and our characters. So wisely, the writers and producers went along with it and they started changing the scripts to do that. And once this depth thing happened, it really made sense that it would just heighten that feeling, deepen that feeling, and it’s really fun to go there, and still be this bad guy.

AX: Do you think that Li’l is going through a comparably-sized change, or he’s still the same person, just in a very changed situation?

RYAN HURST: I think that they mirror each other a little bit. Obviously, they have to contend with who they are and who they have been, but Little Foster being isolated from his family, that’s all that he’s ever known. For the first time, in a big city, in a big prison, with no one to depend on but himself, I think that’s a pretty good change of consciousness.

AX: With Joe Anderson’s character Asa, who was a big part of Season 1, now out of the picture, does that change the dynamics between the rest of you?

HURST: I’m not sure. I think it remains pretty much the same. I think that he was an outsider among the outsiders to begin with, and in the first season, he sort of upset a lot of the things that we had going. But by the end of the year last season, the real trajectory was our battle with the coal company and people down in the town.

MORSE: Obviously, we’re talking about him in the past, but when you write this, his presence is still felt. In terms of G’win’s character, my character certainly, he’ll keep resonating through these stories, even though he’s not really there. He was really a disruptive presence for a lot of us, and in a way, it keeps going.

AX: When you read the opening sequence of Season 2, where it looks like all-out war between the Farrells and the townsfolk, and then it turns out to be just a dream, were you forewarned that this would be a dream sequence, or did you have a moment of thinking, “Well, how the hell does the show go on after this?”

MORSE: It’s just good storytelling. That’s what you want to do. The best series have done things like that.

AX: You seem to have spent a fair amount of time on TV shows kicking people in prisons …

HURST: Yeah, a few episodes here and there.

HURST: A lot of the fighting experiences in SONS OF ANARCHY were rather short. There was a lot of gunplay, but the actual physical fight sequences were pretty short. But OUTSIDERS – Danny [Le Boyer], the stunt coordinator, really took the approach that this is choreography, just like dance moves, so let’s make them eloquent and work on them.

AX: Although I never rule out the magic of CGI, there is a scene where it looks like one person is actually holding you and you are kicking out with your legs. Is that actually you and is that a hard move to do without wrenching yourself?

HURST: [laughs] That was me. There are quite a few other scenes where a beautiful human being by the name of Jay Adams, who’s my stunt double, did a great, great, great job. But that particular one was all me.

AX: Big Foster winds up bedridden and in danger of losing body parts at one point. Had you ever done MISERY on stage?

MORSE: No, just in life [laughs]. Without giving away too much, [Nancy-Elizabeth Kammer], who played that role [of Big Foster’s captor], I really admire her. She was very nervous about taking the role. She has kids, she knew her kids were going to be watching this, and she just wasn’t sure she should be doing it or not. Once she agreed to do it, she just goes for it. It was great for me, great fun to do [laughs]. 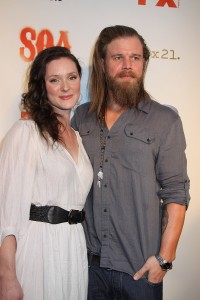 AX: Li’l Foster seems to have the same kind of experience, to a lesser extent, because obviously, he doesn’t know the judicial system. How much is he just going, “What on Earth is happening?” and how much of him is going, “I don’t think this is what’s supposed to be happening, even for the downhill folks”?

HURST: Yeah. There are a few things that were cut out of those courtroom scenes that I’m wishing they would have kept in there, where he was a little more, “What’s all this stand up, sit down, raise your hand business? We’re here to talk about something that has happened, and who was involved.” Just butting up against different customs.

MORSE: Watching it, you may be disappointed that that’s not there, but that’s still there. It’s fun to watch it.

AX: Do the two of you see any sort of thematic resonance in the fact that both of your characters are held captive for awhile in what are, to them, very strange circumstances?

HURST: [laughs] I hadn’t ever really thought about it.

MORSE: Well, just in terms of what we’ve talked about already, is [Li’l Foster] being separate from the family, where he was leaving the family, he was withdrawing from the family, and once he is forced to withdraw from the family, it makes that family much more important. That’s what our series is about, really, is this family. And it’s the same thing with Big Foster. He doesn’t think of himself as a family man, that wouldn’t be how he’d describe himself, but he really is a family man. He is out to save and protect his family, and it turns out that he is, too. Sometimes you’ve got to go to a bad place to see what’s good in your life.

AX: Would you say the way that you’re playing him right now, are we meant to think, “Well, his actions are good, but I still don’t trust his motives,” or are you playing him as though we’re meant to believe he’s had an epiphany?

MORSE: You can believe what you want to believe, I’ll leave that up to you [laughs]. His motive seems pure to him in terms of G’winveer and the clan. He’s a very complicated, dangerous guy, and he can go in any direction at any time, and does, along the way. So that doesn’t stop. But from his point of view, he’s doing something that feels pure.

AX: What did you learn doing Season 1 that’s been invaluable in doing Season 2, whether it’s anything about your characters, or how to walk around in the deep brush so you don’t accidentally put your foot in a hole?

HURST: You think that we would have learned dress lightly, but I went the other route, just to make things a little harder [laughs].

MORSE: He creates his own wardrobe ideas. We’re out there in ninety, hundred-degree heat, and he thinks it’d be really cool to have this two-hundred-pound leather jacket and a bandolier [laughs].

AX: Are you finding that OUTSIDERS has a fandom that either writes to you online or just comes up to you on the street and says, “!!!!”

MORSE: The level of enthusiasm, like at Comic-Con, is high. And it’s fun to be a part of something where – I’m not saying we’re the Beatles – there’s a certain amount of screaming enthusiasm, people reaching out on the stage. It’s nice to have that kind of energy around the show.

AX: Do either of you have any other projects going on that we should know about?

MORSE: There’s a movie called TROUBLE that I did. Theresa Rebeck wrote and directed it, a playwright, with Anjelica Huston and Bill Pullman. We’ll see when it comes out, but it’s out there [on the film festival circuit].

HURST: I’m finishing up my role in BATES MOTEL in the fifth season.

AX: And what would you most like people to know about OUTSIDERS Season 2?

MORSE: You know what? It’s OUTSIDERS, and everything that that brings, it becomes even more explosive as stuff goes along. So it’s a good season.

This interview was conducted during WGN America’s portion of the Winter 2017 Television Critics Association (TCA) Press Tour at the Pasadena, California Langham-Huntington Hotel.