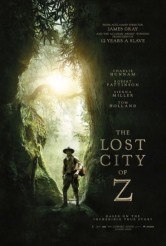 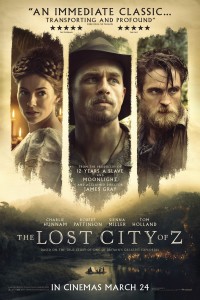 THE LOST CITY OF Z covers two decades in the early twentieth century. The movie feels a bit like it was made in the middle-late twentieth century, the ‘60s through the ‘80s, when there were more stories like this one, concerning men finding themselves by leaving civilization behind.

The irony in THE LOST CITY OF Z is that Percy Fawcett (Charlie Hunnam) was actually in search of a civilization when he plunged repeatedly into the jungles of Bolivia. Fawcett, a real-life figure whose quest is chronicled in the David Grann book that serves as the basis of the film, starts out as a British soldier with excellent training but no medals and no easy means of advancement. With a wife (Sienna Miller), a young son and another baby on the way, Fawcett very much wants promotion. When the Royal Geographic Society asks Fawcett to map the contested border between Brazil and Bolivia, this seems like a great opportunity.

Going through uncharted territory in what Fawcett calls “Amazonia” is perilous business. However, Fawcett finds fragments that convince him a civilization to rival any in Europe or Asia once stood in the jungle. He becomes obsessed with proving this, and mounts multiple expeditions to locate the place he pronounces as “Zed.”

While the Amazon region is famous for its natural dangers, most of the perils Fawcett faces come from humans: indigenous people who are violently hostile to outsiders, fellow explorers who eventually demonstrate they are not cut out for rough terrain and upper-class financiers back home who are extremely skeptical.

Fawcett’s exploits were reportedly a source of inspiration for Sir Arthur Conan Doyle’s novel THE LOST WORLD. Director/screenwriter James Gray’s dialogue and visual style both strongly play up the longing to make discoveries amidst lush vistas. This is a bit tricky for a modern audience, as unlike Fawcett, we’ve got plenty of things to compare to what he finds. However, whether Fawcett is right or wrong, and whether he’ll uncover anything that’s new to us, isn’t really the point here. THE LOST CITY OF Z really isn’t about the end result, it’s about Fawcett himself.

Gray’s script makes it clear that Fawcett is no aspiring conquistador. Indeed, the writing, while not hitting it too hard, suggests that Fawcett’s drive to prove that Amazonian natives made grand civilizations has to do with his own need to prove his own worth within the stifling class system of his own culture. The movie is, perhaps inadvertently, a little less respectful of the Amazonians than is Fawcett, presenting them as relatively exotic and unknowable, with some small exceptions.

Of course, Fawcett is quite capable of doing some stifling of his own, lashing out at his wife Nina when she asserts herself and says she’d like to go on an expedition with him. Fawcett’s ideas about gender roles make this impossible, but at least Nina is presented and played as someone with strong sentiments and desires of her own.

Hunnam has the passion to make us believe Fawcett’s dogged determination, the authority to make us believe he can command an expedition and the maturity to be convincing as someone who is capable of understanding his own mind. Miller is spirited and bright as his wife, Robert Pattinson provides quiet support as Fawcett’s trusted companion and Angus McFadyen is striking as a veteran of an Antarctic expedition.

Filmmaker Gray gives us a lush and foreboding jungle, but he’s less interested in what we find there than its impact on his hero. With Hunnam’s strong performance and the thoughtful script, we’re not seeing something no one has seen before, but it’s a mostly worthy trek all the same.