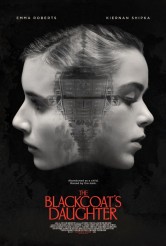 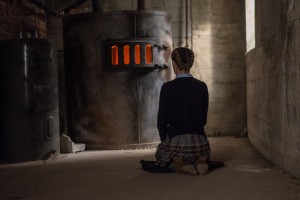 If a singer holds a note, no matter how beautifully pitched, for too long, it becomes simply sound. The same holds true of ambiguity in a horror movie. If a filmmaker tries to cast doubt over every character and every action, it can be hard to work up suspense, because it’s unclear who is in danger.

This is the case with THE BLACKCOAT’S DAUGHTER, written and directed by Osgood Perkins. There is certainly potential in a tale of two students who are almost alone over a winter break in a snow-covered boarding school. However, deliberate lack of characterization, sparse dialogue and what could be considered a casting mistake all add up to a supernatural tale lacking in chills and even entertainment value.

Kat (Kiernan Shipka) is a withdrawn freshman with a lovely singing voice, who is visibly disappointed that the headmaster won’t be around for her school recital. Rose (Lucy Boynton) is a senior who discovers she is pregnant and is unsure of what to tell the father. Rose told her parents to come days later, while Kat is certain her parents won’t come. Rose is not thrilled when she’s ordered to essentially babysit Kat, even though two female teachers remain in residence.

This is intercut with the journey of Joan (Emma Roberts), who has either been released or escaped from a mental hospital. She is approached by Bill (James Remar) who, over the objections of his wife Linda (Lauren Holly), offers Joan a ride.

There is a great deal of literal visual darkness in THE BLACKCOAT’S DAUGHTER, so much so that it’s hard to tell if something is moving in the shadows or not. At first, this is ominous, but as the running time rolls forward and not much happens, it loses its effectiveness. We do get a sense of creepiness in the film’s various unwelcoming environments, but it doesn’t pay off often.

Then there is the issue of everyone behaving strangely. This can be a fun guessing game in a film like THE USUAL SUSPECTS, but here it has the effect of making us not especially invested in anyone. Then there are moments of random weirdness, like Joan letting Bill into her motel room while she’s only wearing a towel. In a different kind of movie, the casual, nonsexual attitude of both might be sweet and refreshing. Here it seems like at least one of them should be extremely nervous, but it adds up to nothing.

There’s also what is built up as a crucial age difference between two characters who appear to be contemporaries (the actresses are three years apart in real life). The dialogue tries to insist on something that’s contradicted by what we’re seeing.

Finally, there’s the matter of why this is happening now. The structure invites us to ask questions, but doesn’t provide answers that frighten, move or edify us.

THE BLACKCOAT’S DAUGHTER looks wonderful, and the cast is very good. However, by the time we’re in the home stretch, it’s easy to think of other films that handle similar themes with more success.