IT COMES AT NIGHT movie review 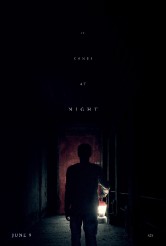 Movie Review: IT COMES AT NIGHT 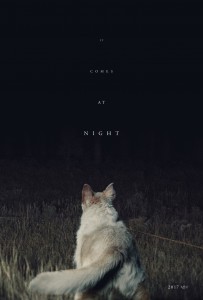 IT COMES AT NIGHT is a perfectly respectable low-budget post-apocalypse character study – or it would be if it wasn’t so half-hearted about trying to add a horror element. This has the effect of making us wait for something that neither fully materializes nor adds meaningfully to the potent tension.

In the world of IT COMES AT NIGHT, an unspecified but deadly plague has decimated the planet. Paul (Joel Edgerton), his wife Sarah (Carmen Ejogo) and their teen son Travis (Kelvin Harrison Jr.) have survived so far by living in a house deep in the woods. Even there, the sickness has found them – the film starts out with the death of Sarah’s father Bud (David Pendleton). The family is resilient, to a point. When stranger Will (Christopher Abbott) tries to break into the house, insisting that he thought it was abandoned, Paul, Sarah and Travis have to decide whether to believe him. Will maintains that he only wants enough to provide for his wife Kim (Riley Keogh) and toddler son Andrew (Griffin Robert Faulkner). The families would like to trust one another, but that’s no easy thing.

Director/writer Trey Edward Shults and his very talented cast create a sense of ongoing urgency. The physical environments are set up so that we get a sense of claustrophobia, even when we’re out in the woods.

Every interaction, even the friendly ones, has weight. We and the characters all try to figure out what’s happening, what’s fair and what’s paranoia. There are other apocalyptic thrillers dealing with potential breakdown of the social order, of course, but IT COMES AT NIGHT is a worthy addition to the canon in that respect. The threat of plague is something that’s easy to understand, and while we may wish that characters acted differently, their behavior and language feels natural and true.

However, with a movie called IT COMES AT NIGHT, there’s an implicit promise that at some point, an “it” will arrive. Travis has some nightmares and what may be visions, and there are a couple of inexplicable incidents. The visions don’t tell us (or Travis) anything not already known, and while the incidents give the plot a few gentle shoves, they are so absolutely not addressed that they feel like bait and switch by the end. IT COMES BY NIGHT has some philosophical heft, but not enough to justify loose plot ends.

IT COMES BY NIGHT is cinematic, but it could easily be adapted for the stage. Viewers seeking a character-driven end-of-the-world-as-we-know-it tale should be pleased. People who think that at some point this will turn into a horror film are doomed to disappointment.