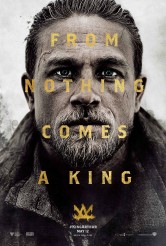 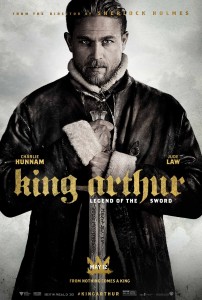 On the one hand, there’s a protagonist called Arthur who pulls a magical sword out of a stone in medieval Britain, so the storytellers have pretty much got to acknowledge this is indeed a tale of Arthur and Excalibur. On the other hand, Mordred is a mage who is battling in the back story before Arthur is even born (since Arthur is usually Mordred’s father or at least uncle in the legend, this is more than a bit weird), there are mountain-sized elephants, and the orphaned Arthur grows up to be the kind of underworld bloke that Jason Statham played in director Guy Ritchie’s early films, so this won’t be for purists. Welcome to KING ARTHUR: LEGEND OF THE SWORD.

Whether and how much KING ARTHUR: LEGEND OF THE SWORD appeals to people will depend greatly on how much they like Ritchie’s work overall, how tolerant they are of changing up eras and styles of speech and dress and philosophy, and how much they’re sticklers for a film paying attention to its own rules.

Taken entirely on its own, this KING ARTHUR is reasonably entertaining (provided, again, that one is amenable to stories about London underworld antiheroes transported into a fantasy realm). In this version, Arthur’s father Uther Pendragon (Eric Bana) is actually married to Arthur’s mother, but both Arthur’s parents are slain by Uther’s ambitious brother Vortigern (Jude Law).

Two-year-old Arthur floats away from Camelot, Moses-like, in a boat. He winds up in Londinium, where he is adopted by the staff at a brothel. Arthur grows up to be an exceptionally good businessman, liar and, thanks to the local monastery full of martial-arts-practicing monks, a superb fighter as well. Arthur doesn’t know that there’s a legend about Uther’s son being the only one able to pull Uther’s sword from the stone. Vortigern, however, is aware of this and tries to fend off the prospect of having his nephew take the kingdom.

Luckily for Arthur, there are some mages who’d like to see him succeed. For the audience, there are also dramatized what-ifs, hallucinations, super-quick edits, a training montage, one of Arthur’s followers in a Robin of Loxley outfit, contemporary dialogue, the occasional monster, costumes that are sort of period and sort of not, and a movie that seems to sometimes forget things like the wording of magical proclamations and the like (when an otherworldly evil force decrees that the bad guy needs to do a specific deed in a specific place in order to accomplish his evil goals, you’d think said bad guy would remember to go there, especially when his forgetting this is not a plot point).

There are a couple of good mythic ideas here, notably the exact nature of the stone that holds the sword (this achieves resonance) and a mage of few words (Astrid Berges-Frisbey) who is able to coax animals, birds and reptiles into being helpful. Berges-Frisbey conveys an otherworldliness that works very well.

Hunnam is likable as Arthur and Law makes Vortigern someone we would like to see defeated, so that works. Supporting characters never pop as much as they should, though Neil Maskell as one of Arthur’s loyal friends from back home makes an impression, Djimon Hounsou has authority as a rebel knight, and it’s enjoyable seeing the always on-target Aiden Gillen playing a good guy here who seems almost as clever as his GAME OF THRONES character Petyr Baelish.

There are things here to remind us of a number of other films, chief among them A KNIGHT’S TALE, which also played with anachronism, albeit in some different ways. KING ARTHUR: LEGEND OF THE SWORD is not as engaging as it might be within its own style, but it’s still a lot of fun as mix-and-match movies go.