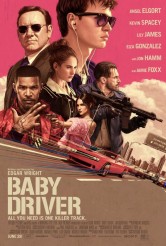 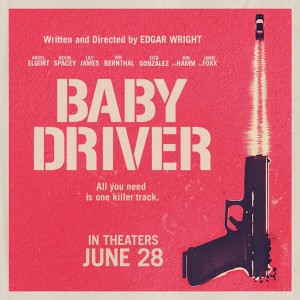 BABY DRIVER has pretty much wall-to-wall music, and almost that much action to go with it. The tale of a very talented, reluctant young driver (Ansel Elgort) working for a crime boss, BABY DRIVER plays like a friendlier version of a Quentin Tarantino movie with more car chases and fewer words.

The driver, who calls himself Baby, almost immediately gets a chance to show his stuff, chauffeuring three bank robbers (Jon Hamm, Eiza Gonzalez, Jon Bernthal) away from the scene of the crime with some ingenious, hair-raising vehicular moves. All of them are in the employ of Doc (Kevin Spacey). Doc packages teams to do various armed heists for him, rotating the members of each crew. The one constant is Baby, who loves music and listens constantly to his iPod in order to counter his tinnitus. Baby wants out of Doc’s employ, especially after he meets pretty waitress Debora (Lily James). Baby is also bothered by the fact that some of his passengers think nothing of shooting bystanders in the commission of crimes. But Doc’s hold seems to be ironclad.

Director/writer Edgar Wright (SHAUN OF THE DEAD, THE WORLD’S END) previously made slight inroads into this genre with his satiric British cop comedy HOT FUZZ, but BABY DRIVER largely represents a change of pace for him. The dialogue is rapid patter that seeks to engage and surprise, and the chase sequences are confident and complex (Baby hiding a bright red getaway car in plain sight is a fabulous bit of business). He also is deft enough to make us accept, for the purposes of BABY DRIVER, that Baby is essentially is a free spirit with a good heart trapped by circumstances, rather than a complicit enabler of those around him.

BABY DRIVER is also smooth and whimsical enough that we even enjoy, rather than are jolted out of the film’s internal reality, when Baby dances expressively to the tunes he’s hearing. Elgort has grace and joy in his movements, and projects credible soulfulness when he’s holding still. Spacey is entirely in his element as the sarcastic, menacing underworld figure who might turn in any direction at any moment. Hamm’s performance at first seems odd, but once we learn his character’s back story, it fits perfectly. Gonzales is a fierce charmer and Jamie Foxx is suitably threatening as another robber with an antagonistic attitude. James has an underwritten character as Baby’s dream girl, but she plays her character’s sweetness and devotion with conviction. CJ Jones is affecting as an elderly man invested in Baby’s well-being.

It should be noted that BABY DRIVER is loud, and not just in the way we expect modern action movies to sound. The volume on Baby’s beloved tracks is turned way, way up, overpowering even the revving motors, gunplay and explosions. Viewers with tender ears should take precautions.

BABY DRIVER is an homage to other big, great action heist movies, but it’s ambitious as well. It seeks to make its mark on the genre at the same time that it strives to entertain. It is quirky and effective enough that it does both.