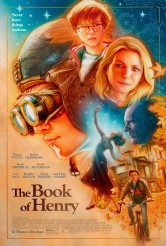 Movie Review: THE BOOK OF HENRY 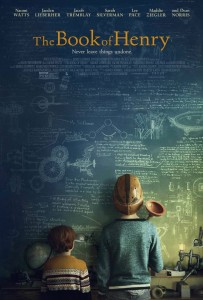 THE BOOK OF HENRY is something of a return to roots for director Colin Trevorrow. Before helming JURASSIC WORLD (and yes, he’s also scheduled to direct STAR WARS: EPISODE IX), Trevorrow made his feature directing debut with the wonderful, unpredictable 2012 indie SAFETY NOT GUARANTEED. THE BOOK OF HENRY has what looks like a slightly bigger budget than SAFETY, but it too zigs into some unexpected places.

THE BOOK OF HENRY starts as what seems to be a Spielbergian coming-of-age story, before morphing into something else. The exact time period is a little sketchy – people have laptop computers, but pay phones are still readily available and while cell phones are referenced, we don’t see them. Still, there is that sense of a grand child’s adventure at the outset. Then the movie jumps genres at least twice, which isn’t a bad thing when we’re still engaged and don’t anticipate exactly where we’re headed.

At the beginning, we meet Henry (Jaeden Lieberher), a brilliant eleven-year-old living with his single mom Susan (Naomi Watts) and little brother Peter (Jacob Tremblay) in what appears to be upstate New York. They have a very nice house, considering that Susan is a diner waitress. We soon learn that Henry has made the family relatively wealthy through his canny stock investments. Henry is also an inventor of Rube Goldberg-esque devices, apparent builder of an awesome tree house and schoolyard protector of his little brother. When Henry senses something is wrong in the life of classmate and next-door-neighbor Christina (Maddie Ziegler), he sets about investigating what’s happening.

Then THE BOOK OF HENRY takes a turn. When this plays out, we’re only halfway through the movie. Something else clearly has to happen, but what? Without being spoilery, it’s safe to say that Gregg Hurwitz’s script takes us somewhere that is not a conventional follow-up to what has come before.

There’s a little bit of weirdness in how very dependent mom Susan is on older son Henry. This can be taken as a metaphor for the way parents define themselves in relation to their kids, which works well enough, but in the literal sense, it seems like Susan ought to be able to come to certain realizations without the aid of what happens in the last few reels.

Even so, THE BOOK OF HENRY feels sincerely goodhearted in the way it endorses reaching out and helping other people. We see Susan and Peter bonding, we see a number of characters being creative in the way they reach out, and we see a good amount of dark humor in the way Henry and Susan are plausibly thwarted by efforts to do the right thing.

For all the early charm of THE BOOK OF HENRY, this is not a film for small children. There is outright tragedy, and then there is what’s going on with Christina. Although we see almost nothing on screen, her situation is something that may require careful explanation by parents for younger viewers.

Kalina Ivanov’s production design deserves special mention, as all of the spaces dear to Henry are infinitely inviting. We’d like to hang out there, too. Trevorrow’s direction is very atmospheric, and his cross-cutting of a grade school talent show with something far heavier is highly effective.

Lieberher is convincing as the young genius, Watts is full of warmth and intensity and Tremblay is excellent. Ziegler has little dialogue but expresses herself beautifully in a dance solo. Dean Norris is subtle and responsive as the local police commissioner, Sarah Silverman is tart and companionable as Susan’s best friend and Lee Pace is appealingly twinkly as a helpful doctor.

THE BOOK OF HENRY fades a little in the home stretch, taking a shortcut that should have been established sooner. Still, it’s original, sometimes moving and often surprising.