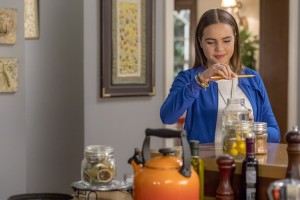 GOOD WITCH is now in its third season on Hallmark Channel. The family comedy/drama stars Catherine Bell as the title character, Cassie Nightingale, and Bailee Madison as her daughter, now-adolescent Grace Russell. Bell and Madison both starred in several GOOD WITCH telefilms prior to it becoming a series.

Madison, who has been acting since she was seven years old, is one of Hallmark’s favorite performers. She’s been in multiple films for the network. Madison has also done a wide variety of feature films, including the drama BROTHERS, the horror offering DON’T BE AFRAID OF THE DARK and the fantasy ANNABELLE HOOPER AND THE GHOSTS OF NANTUCKET. Later this year, she’ll be back on the big screen in the thriller THE STRANGERS 2.

At a party thrown by Hallmark for the Television Critics Association (TCA) at Pasadena, California’s Tournament House, Madison talks about what’s new on GOOD WITCH this year and what else she’s doing.

BAILEE MADISON: I’m so excited. We wrapped up production on the third season of GOOD WITCH in December.

ASSIGNMENT X: What is new for Grace this year?

MADISON: What’s new for Grace – we’ve kind of shown the imperfection that’s within her. The last two seasons have been very perfection-based, of her being the best student and the best daughter, and I think, naturally as girls grow up, they start to kind of lose parts of themselves, and sometimes it’s for the best, sometimes it’s not for the best. This season, we really get to explore the natural ways that we have to grow up in this world, so it was a lot of fun to get to do.

AX: Is she getting more power, less power …?

MADISON: What I’ve always loved about this show is, it’s not necessarily power, it’s what’s within the heart, and I think, as she grows up, her heart strengthens, and her love for others does as well. So I think that throughout the season, you’ll start to see the compassionate side of her come out more, and sometimes she gets jealous of people, and sometimes her heart doesn’t react the way that she would want it to, so you’ll start to see her battle with the good and the bad that’s within all of us.

MADISON: Oh, I love music. I’m always running around the kitchen, dancing with my family. I was just singing with my sister Caitlin, my little niece has started writing little songs, and I write myself whenever I can. So music would be a wonderful thing to explore. I’m trying to figure out a way this year to tap my foot into different things, and I’m excited for what the year holds.

AX: And are you doing any programs outside of Hallmark?

MADISON: Yeah, I just [completed] post-production on a movie called A COWGIRL’S STORY. I produced that as well, so we’re finalizing that. I’ve kind of gone into behind-the-scenes work. I just finished co-writing my first YA novel [with Stefne Miller, LOSING BRAVE, due out in January 2018]. So I’m very excited for that, and reviewing scripts and figuring out what the right stuff is for me right now. I’m growing and want to find the right things that change with me.

AX: What did you learn as a producer?

MADISON: This is my second time producing [the first was last year’s ANNABELLE HOOPER AND THE GHOSTS OF NANTUCKET]. I think each time you learn more and more. I was really involved in the beginning process of this movie, which was very exciting, so down to the casting and getting our crew on set. It’s really a team effort and you never sleep when you’re a producer, and I love that more than anything.

AX: And what would you most like people to know about Season 3 of GOOD WITCH?