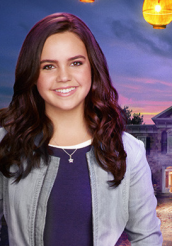 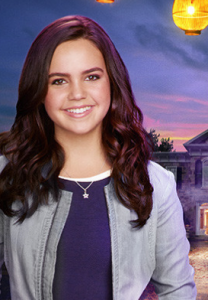 Bailee Madison just turned sixteen on October 15. That’s not the only thing the young actress from Florida has to celebrate – besides starring in two upcoming features (OFFER AND COMPROMISE, ANNABELLE HOOPER AND THE GHOSTS OF NANTUCKET), she’s also the lead in two Hallmark Channel franchises.

In GOOD WITCH, a series continuation of Hallmark Channel’s successful telefilms starring Catherine Bell as the title character Cassie Nightingale, Madison plays Grace Russell, the likewise magical daughter of the heroine. While GOOD WITCH won’t be back for its second season until 2016, the two-hour GOOD WITCH HALLOWEEN premieres this Saturday, October 24.

ASSIGNMENT X: How are you enjoying doing GOOD WITCH?

BAILEE MADISON: I love it. Honestly, they’ve accepted me like family. They’ve obviously had such successful movies. Going into the series, I was kind of a newbie and was so thrilled to be a part of it, and now it’s like my second home, my second family, and we’re thrilled to be coming back for a second season, and the fans have been amazing.

AX: How old is your character Grace on GOOD WITCH?

MADISON: My character is my age, fifteen, which is really cool, so I’m playing someone who is me and who is going through things that I’m going through, except she’s a little more magical than I am.

MADISON: TROPHY WIFE on ABC, which obviously was an amazing series and kind of gave me the TV series bug. I’d always gone and done four episodes here and an episode there.

AX: Are you looking forward to transitioning into adult roles, or do you want to play a teen for a little bit longer?

MADISON: I think there’s no reason for me to start being an adult when I’m only [sixteen]. I’ve always tried to be exactly what I’m going through and to challenge myself in a way that is age-appropriate. I’m not skipping around and acting like a ten-year-old, because I’m not a ten-year-old any more. I’m almost sixteen and I’m trying to put myself in roles that challenge me, but are challenges a sixteen-year-old girl should be going through.

AX: Age is probably not an issue when you’re playing a character like Clementine in NORTHPOLE: OPEN FOR BUSINESS. She’s an elf, right?

MADISON: Yeah. Clementine’s back, same character, same elf ears, a little bit more of a fun outfit. She’s growing up, which is really cool. Lori Loughlin is in our movie. So thrilled to have her and another amazing group of people, and thrilled to get the Christmas spirit back up.

AX: How is wearing the elf ears?

MADISON: I got really used to it. I forget they’re there a lot of the time, and the good news is, whenever Clementine is in the normal world, she has to hide her ears, so I don’t have to wear them that much, except for the North Pole scenes. So we have a great time, and I take lots of selfies with the ears, and it’s great.

MADISON: Yeah. For some reason, I decided to wear butterflies all over my dress tonight. I called my schoolteacher from elementary school, and I said, “I’m wearing butterflies. I feel like it must mean something.” And she said, “It’s about rebirth and becoming a new person and constantly growing.” And in a way, it’s very true to what I am trying to do today – constantly learning and different circumstances and trying to figure out new things about myself. So it means something, which is exciting.

AX: What have you learned lately that’s excited you?

MADISON: Trust is such a huge thing, especially in this industry. It’s very hard to trust people, and I trust easily, so I’ve just kind of learned to open your heart as much as you can and not be afraid to get hurt, because we all will, we’re all human, and people are going to let us down and they’re going to bring us up. Just not being afraid is something I’ve really learned.

AX: Are there any particular genres or types of roles you’re looking forward to doing?

MADISON: I’d love a really good teen romance, just because I haven’t done it yet and I think it would be so much fun – it just kind of makes sense for me right now – and then some cool kick-butt action-stunt-mystery would be really fun.

AX: What would you most like people to know about GOOD WITCH and NORTHPOLE: OPEN FOR BUSINESS?

MADISON: GOOD WITCH, we’re just bringing back the same family and finding the magic it had in the first season, except we’re constantly trying to be better and learn about our characters, so Grace is definitely going to be in different scenarios with the adults and with the kids around her and figuring herself out. And in NORTHPOLE, Clementine has a great relationship with Lori Loughlin’s character and she’s trying to bring back the real meaning of Christmas and save it, so everything from the first movie is going into the second, except it’s just amplified, and there’s more joy and love that comes out of it.

This interview was conducted during Hallmark Channel and Crown Media’s party for the Television Critics Association summer press tour.