©2017 Focus Features
The cast of THE BEGUILED
Reviews

The greatest threat from jealousy is camp 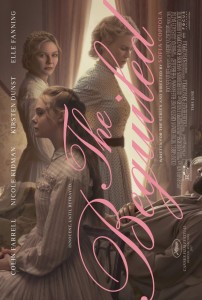 The new film THE BEGUILED, directed and written by Sofia Coppola, is not the first film adaptation of Thomas Cullinan’s novel A PAINTED DEVIL. In 1971, Don Siegel directed a screenplay by John B. Sherry (the pen name of Albert Maltz) and Grimes Grice (the pen name of Irene Kamp), with Clint Eastwood in the starring role. Eastwood played John McBurney, a Union soldier. While the American Civil War rages on out of sight, the wounded McBurney is found in the woods by a young student at an isolated all-girls school on the Confederate side. McBurney tries to charm all the females there. Between his good manners and their curiosity and lack of contact with the outer world, he succeeds fairly well. The situation takes a dark turn when jealousy leads to violence.

Coppola uses a very distinct color palette for THE BEGUILED. Everything is desaturated and muted, so that even pinks and blues appear pale, verging on white. The notion that nothing overt or exciting happens as the school gets visual as well as narrative confirmation. It’s artful and makes THE BEGUILED optically consistent and appealing.

The 1971 version is solidly on McBurney’s side, even though he’s manipulative, to say the least. In Coppola’s edition, there’s less overt sexual hysteria among the women, both full-grown and minors. Some previously ambiguous motivations are made clearer and less sinister here. When McBurney – here played by Colin Farrell – has an outburst, the response he draws from those around him is terror, not petulance. The women may suffer from hurt feelings, but not hysteria. They are our protagonists, not our enemies. What McBurney, and the earlier film, regarded as an act of malice, we are shown (graphically) here is something motivated by both compassion and life-saving necessity.

At the same time, this iteration of THE BEGUILED doesn’t fully credit the intelligence of any of its people – not McBurney, not school headmistress Martha Farnsworth (Nicole Kidman), not teacher Edwina Dabney (Kirsten Dunst) and not eldest student Alicia (Elle Fanning). Young Amy (Oona Lawrence), the child who discovers McBurney and brings him to the school, seems very bright as well as kind-hearted, but we’re not seeing things from her perspective. We’re watching everyone through a sensibility where it’s obvious that we know better than they do. It seems that we’re intended to appreciate the physical appearance of what they’re doing rather than any new insights into their psychology or their emotions.

The result is that not only do we feel at a remove from the action and the people, but the drama sometimes slides straight into camp. Part of the issue is simply that there’s quite a history of onscreen repressed sexuality by now. A period piece exploring this runs the risk of looking like a parody of previous works on the subject, especially when it has neither a sense of humor or a full sense of itself. THE BEGUILED doesn’t have the kind of depth or empathy needed to escape from the long shadow of all those other movie moments dealing with its subject matter, even though it is undeniably pretty.