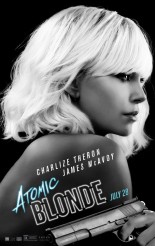 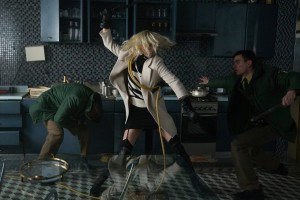 ATOMIC BLONDE looks absolutely amazing. Director David Leitch, who comes from a stunt background and did some sequences on JOHN WICK (and is scheduled to do DEADPOOL 2) knows how to make his actors, his settings, his colors and his shapes all breathtaking from one shot to the next. There is no arguing with his sense of style when it comes to imagery – and fighting.

Leitch’s sense of storytelling, however, is another matter. With from a screenplay by Kurt Johnstad, based on THE COLDEST CITY graphic novels by Antony Johnston and Sam Hart, ATOMIC BLONDE is set in 1989 Berlin, just as the Wall is about to come down. Battered British agent Lorraine Broughton (Charlize Theron) is being debriefed by her boss Eric Gray (Toby Jones), with CIA agent Emmett Kurzfeld (John Goodman) sitting in over her objections. Watching behind the one-way glass is MI:6 boss C (James Faulkner). The narrative jumps around between Lorraine in the room, flashbacks to incidents she’s relating to them, and side-flashbacks to scenes where Lorraine is not present.

The structure could be playful, which seems as though it might have been the intent, but neither Lorraine’s character nor ATOMIC BLONDE itself exhibit the kind of joy this requires. Lorraine’s mission is to retrieve a list of names stolen by a defecting East German Stasi operative (Eddie Marsan) and also to unearth the identity of a double agent known as Satchel. She is told to pair up with David Percival (James McAvoy), MI:6’s Berlin station chief, whose methods are a bit unorthodox. McAvoy and his character both have a bit more fun, but the movie is so intent on keeping us guessing who is up to what – we’re not allowed to trust either Lorraine or David until the finale – that it keeps both characters opaque. They are both extremely proficient and extremely determined. This is all we get to know about them until very late in the game, and by then, we’re at too much of a remove. Marsan and Sofia Boutella provide some much-needed openness and humanity, but we need it from the leads to fully engage, and we don’t get it.

Another issue is that both the list and the identity of Satchel play as maguffins, things that move the plot along but that we’re not expected to particularly care about. Without any emotional reason to track either investigation, we’re very conscious of being moved from one set piece to another without being invested in what’s happening. We also get one of those multi-scene finales where it seems as though two additional endings were tacked on in case people might not either understand or be satisfied with the first one.

ATOMIC BLONDE, with its multiple perspectives, wall-to-wall period score and epic, bloody fights seems to want to be a Quentin Tarantino movie with the zing of BABY DRIVER, yet have the authentic weariness of TINKER TAILOR SOLDIER SPY. It can’t encompass all of these, and the result is that it doesn’t fully serve any of its models.

Theron is as convincing as any un-superpowered action hero we’ve seen. You will believe Lorraine can take down anyone or anything that comes at her, even if it costs her something. She also looks every bit as stunning as the rest of the film.

ATOMIC BLONDE is groundbreaking in one respect, but to discuss it would be spoilery. Suffice to say it’s a pleasure to see a mainstream action movie with this type of main character.  The movie is certainly worth seeing for this reason, for its optical beauty and for its exceptional kickassery. If only the script had lived up to these aspects, the whole film would have been magnificent.