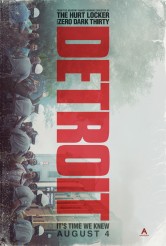 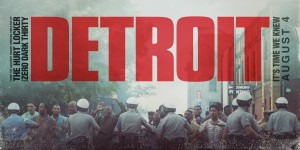 DETROIT for much of its running time plays as a fact-based horror movie. Although it is set against the backdrop of the conflagration that occurred in the title city during July 1967, DETROIT is actually about one specific incident.

At least in the film, written by Mark Boal and directed by Kathryn Bigelow (the same team from THE HURT LOCKER and ZERO DARK THIRTY), the initial breaking point is when white police roust a black after-hours club. However, instead of just sending the patrons home, they pile everybody into police vans. This is one insult too many for a number of bystanders. In the following days, the African-American parts of Detroit roil with outrage, fires and curfews, and the streets were filled with local police, state police and the National Guard.

At first, it seems as though DETROIT is going to be about the impact of the fury of both sides on various parts of the black community. Then its focus narrows to the Algiers Hotel, where a rising young male musical group with Motown aspirations, the Dramatics, stops for the night. The young men meet two white sisters from Ohio, who introduce them to some local black friends. One of the friends, making a point, shoots off a cap gun.

This unfortunately is read as sniper fire by the nervous law enforcement nearby. One cop, sure that the shots were real and came from the Algiers, decides his best bet is to terrorize everyone he can get his hands on until somebody provides the name of the shooter. The cop and his compatriots are white men, the men at the hotel are black, the two white women are female. The officer in charge thinks the potential downside of scaring black men and white women seems minimal. When things get far more out of control than intended, the officer decides a full cover-up is in order.

Bigelow and Boal are skillful in depicting an atmosphere that is very like the fog of war. We know who the bad guys are, yet understand how they justify their actions to themselves. We also completely comprehend the actions of the people being humiliated, tormented and made to fear for their lives. The characters are fleshed out enough for us to see them as individuals.

However, DETROIT also takes a few detours. John Boyega gives an excellent performance as Melvin Dismukes, a black security guard working in the vicinity of the Algiers who becomes a witness to some of the horror. He is never directly involved, though, and the amount of time spent with him is not enough to illuminate a new perspective. The film likewise spends time on odds and ends that we expect to fold into the main story, until they don’t. It’s fine that DETROIT wants us to understand that there’s a larger world and bigger implications outside of the immediate terror of what’s happening at the Algiers. The trouble is that it presents much of these details in a way that is less informative than it is distracting.

Other cast standouts include Tyler James Williams, Algee Smith, Nathan Davis Jr., Anthony Mackie, Kaitlyn Dever and Hannah Murray as the innocents caught up in the motel nightmare, and Will Poulter as the policeman who orchestrates their misery.

DETROIT is a good film, and an important one, in that it illustrates with clarity and conviction what abuse of power looks like. It would be better still if it didn’t digress as much as it does.