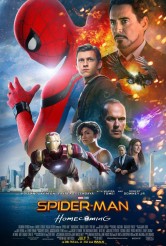 The new incarnation of Peter Parker/Spider-Man, as played by Tom Holland, was introduced last year in CAPTAIN AMERICA: CIVIL WAR. In that film, billionaire/superhero Tony Stark/Iron Man (Robert Downey Jr.) heard about Peter’s unusual abilities and recruited the high school student to act as a surprise non-lethal weapon against Cap and Co. in a dispute.

In SPIDER-MAN: HOMECOMING, it’s a few months later. Peter, who has a brilliant mind, is doing well in high school. Tony, who designed Peter’s Spidey suit, has given the teen use of it. Peter employs the suit to thwart purse snatchings and bank robberies, but pines for another big adventure. When Tony doesn’t call, Peter uses the suit’s higher settings and gets himself in over his head.

Running on a parallel track, eight years earlier, salvage operator Adrian Toomes (Michael Keaton) got hold of a few alien artifacts left over from the Battle of New York in THE AVENGERS. He uses these to manufacture super-weapons, which he sells to local criminals. By the time of SPIDER-MAN: HOMECOMING, Adrian has created both a very profitable business and his own secret identity, the Vulture. He and Spidey are destined to cross paths.

One of the most pleasing aspects of SPIDER-MAN: HOMECOMING is that it feels proportionate. The scope of the plot is big enough to be entertaining and suitable for superheroes, without seeming so huge that we wonder why Tony doesn’t call in the Avengers. At the same time, it effortlessly positions itself squarely within the AVENGERS universe, and not just because it has Tony/Iron Man and a few other familiar faces.

Director/co-screenwriter Jon Watts also proves handy with integrating Peter’s school life, his desire to connect with Tony and his dedicated heroics. Unlike a lot of movies with adolescent heroes, SPIDER-MAN: HOMECOMING doesn’t need on the nose speeches to make its points. It also has a becoming light touch that can darken to be effective in the serious moments.

Holland aids the project in every respect. He is enthusiastic, determined and refreshingly humane. We’re reassured by his performance, as well as by the story beats, that nobody is going to die or even get mugged because Peter Parker is having a sulking fit.

Keaton is perfectly suited to Toomes/Vulture. From a comic book movie standpoint, there’s a charge in seeing the actor, DC’s erstwhile Batman, take on a Marvel villain.

It’s also fun to see Downey’s urbane Tony Stark realize at some point that, in mentoring Peter, he’s quasi-trying to parent a teenager. Jacob Batalon makes a strong impression as Peter’s best friend and Laura Harrier and Zendaya are both appealing as fellow students. Jon Favreau is solid as Tony’s right hand man Happy, who has no idea why he’s stuck liaising with Peter, and Marisa Tomei is capable as the younger, sexier than usual Aunt May. There are a few notable cameos. Viewers should by all means stay through the end credits.

There may be a movie-worthy behind-the-scenes story of how Disney, which now owns Iron Man and his Avengers friends, lent some characters and even a bit of CAPTAIN AMERICA: CIVIL WAR footage to Sony for SPIDER-MAN: HOMECOMING. Granted, Sony let Spider-Man appear in the earlier film. In any event, it’s heartening that studios can make deals that result in the greater good of storytelling. It’s the kind of thing that gives you hope; the buoyant feelings resulting from Spider-Man’s latest exploits are a bonus.