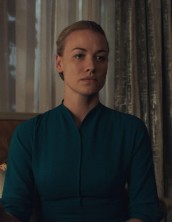 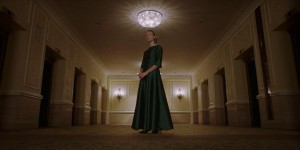 In THE HANDMAID’S TALE, now streaming its first ten-episode season on Hulu and renewed for a second, marriages have become very complicated. Based on the novel by Margaret Atwood and developed for Hulu by Bruce Miller, THE HANDMAID’S TALE tells of a near-future when women are completely subjugated. None are allowed to read or write. Because much of humanity is no longer able to reproduce, fertile women are forced to be handmaids, who bear children for powerful married couples.

Yvonne Strahovski plays Serena Joy Waterford, wife of Commander Waterford (played by Joseph Fiennes). She has more freedom than most other women, but that’s not saying much. Once a month, she participates in the Ceremony, where her handmaid Offred (played by Elisabeth Moss) lays between Serena Joy’s legs while the Commander tries to inseminate her. Nobody’s idea of fun marital relations.

Australian actress Strahovski spent five years as secret agent Sarah Walker in the spy comedy CHUCK, a serial killer who falls for the eponymous lead in the last two seasons of DEXTER and a CIA agent keeping pace with Jack Bauer in 24: LIVE ANOTHER DAY. Strahovski did play a somewhat less physical character as a public figure’s spouse in 2015’s series THE ASTRONAUT WIVES CLUB, but THE HANDMAID’S TALE’s Serena Joy still represents a change of pace.

YVONNE STRAHOVSKI: For lack of a better word, and to be very general, she’s the villain, she’s one of the bad guys. So I’ve kind of had to put all my personal beliefs or levels of integrity or whatever morals I have aside in order to delve into her. I feel sorry for her, I love her, but there’s a part of me that also, if I wasn’t playing her, I would despise her as well. She was part of the construction of Gilead, and part of creating this oppressive, totalitarian society. But now she’s living it, and she’s oppressed by it herself. And that’s a really complex place to be. We meet Serena in a moment where I think she hasn’t admitted that to herself quite just yet. I think she’s just trying to get by and she probably thinks that if she could just get this baby via the handmaid that maybe things would just be better between her and her husband.

ASSIGNMENT X: But is she a woman who’s going, “Well, given that I’m infertile, this is the best situation I can get, so I’m going to buy into it,” or she actually thought that Gilead and its repression of women was a good thing in the first place?

STRAHOVSKI: Well, it’s kind of a gray area. It’s not really explained in detail. My personal belief is that, yes, she was part of the architecture, along with Commander Waterford and along with the other commanders, because Serena is an intellectual woman, she’s a spokeswoman, she’s an author, she has a relationship with being able to change things and contribute to the architecture of the society based on her beliefs and her shared beliefs with other people. Do I think there was a moment close to the end, close to that finish line of creating Gilead, in those final moments where her right and her voice of contribution was taken away? Yes. How much did Serena have to do with the decision-making process of the Ceremony, for example? Those are the questions that come to my mind. As a woman, I think, well, what woman, even a woman like Serena Joy who is of such faith, what woman would want to put herself in that position? And I think that’s a struggle for Serena. It’s not an easy answer.

AX: Were you familiar with the book THE HANDMAID’S TALE before you become involved in the Hulu project?

STRAHOVSKI: I hadn’t read the book. I met Bruce and I went in for this role having just read the pilot. And it was an interesting process, because obviously Serena is older in the book, and that’s how she’s been played in other interpretations of this book, and I was never the go-to actress for this role, ever. And so I knew that going into this, and there was a part of me that enjoyed the challenge of just going in and saying, “Just give me a shot at this,” because it’s so different from what I have normally done. And then there was another part of me that just really connected to the material, the pilot. Once I got the role, I delved into the book.

I love reading the source material. I think anything on the page is really great, because this pilot supports the book so much, as does the rest of the season. It was really important for me to read the book as a support system. I did not watch the movie. That’s one thing I think a lot of us [in THE HANDMAID’S TALE cast] avoided, , but too much gets in my head, I think. We’re trying to create something that’s a little different.

AX: You often have roles where you punch and kick and poison and shoot. While you’re playing Serena, is part of you going, “Let me kick someone”?

STRAHOVSKI: I love this. This is a no-makeup, plain role. This is a woman who has had a lot of her identity stripped away from her. She no longer can read or write or engage in the news for her own personal wants and needs, and she can’t relate to her husband in that way, at all, and she’s had her sexuality stripped from her. She can no longer engage in sex for pleasure, because that’s forbidden. Now it’s only sex for procreation, and someone else is doing that, and it’s not even sex – it’s sexual slavery. So it’s very complex. I think Serena Joy, technically, as a female in Gilead, she is at the top of the food chain. So she could probably get away with more. She’s got maybe a little more freedom than other women who are in far more repressive situations, but that’s not to say that this isn’t an oppressive situation for her, either.

AX: Do you think she tried to manipulate the situation in Gilead early on?

STRAHOVSKI: I don’t know that she tried to manipulate it more so than that she just is a woman of faith, and she believed that this was the right way to go, given the circumstances of the present-day world [within the story] – the climate was a disaster, chemical overload in the air and all kinds of things that we touch on in this pilot, and the book. I think Serena’s biggest thing is, the birth rates have fallen, it is incredibly difficult to have a baby, we’re going to become extinct if we don’t do something about it now, and we need to do it by force, but we need to do it by the book, which is the good way to do it, in her mind, is what I think.

AX: This may be more a question for Bruce Miller, but does the show get into what happens if a married woman is fertile? Does she still have to have a handmaid, or …?

STRAHOVSKI: Well, it is illegal to say that a male is sterile in Gilead, so even if, let’s say the Commander was the one with the issue and not Serena, it would be illegal in the world, in our society, to admit that.

AX: But if both members of the married couple are fertile …?

STRAHOVSKI: Yeah, I would imagine, because you’re procreating and you’re allowed to be sexual with your partner for procreation. I would imagine – that’s me answering that without Bruce or Margaret Atwood, so …

AX: Serena clearly has some concerns about the Commander becoming sexual with Offred on his off-time …

STRAHOVSKI: Yes, on his off-time. Sure, there are all kinds of [aspects] to her worry in this world [laughs].

AX: THE HANDMAID’S TALE has very distinctive, specific colors. Obviously, that pops on the screen, but when you’re on the set, do you see all those colors, or do you have to wait to see it all cut together to go, “Oh, that’s what they’re doing with that shot”?

STRAHOVSKI: You see the world, definitely, and all the pops of color and everything, but in the edit, it’s extraordinary to see all the tight shots and how the colors worked out. That’s really something else.

STRAHOVSKI: You know, I’ve worked with a lot of d.p.s  [directors of photography] turned directors. Reed is extraordinarily special. I think she’s very gifted in her directing ability. She has a way of crafting and allowing you to really pursue the truth when you’re trying to get to the bottom of it, and the character, in the scenes.

STRAHOVSKI: I shot a movie, it’s called HE’S OUT THERE.

AX: From the title, it sounds like this might be a role that requires more punching and kicking?

STRAHOVSKI: You could say that, yeah.

STRAHOVSKI: It’s extraordinary. You’re not going to be disappointed, and I say that wholeheartedly. It really is a unique, something-special show.