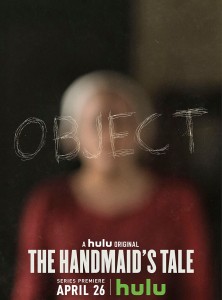 Margaret Atwood’s novel THE HANDMAID’S TALE has been considered a classic of dystopian fiction since it was first published in 1985. It is set in a near-future where a quasi-religious, fascist government has taken over. The subjugation of women by men is absolute. Fertility is rare. Women who can bear children are taken by powerful men as “handmaids” who are impregnated in a ceremony that involves not only the men, but their infertile wives.

THE HANDMAID’S TALE has been adapted as a 1990 film and a 2000 opera. Now it is a series on Hulu, starring Elisabeth Moss as June, renamed Offred by her captors and sent to live as a handmaid in the home of Commander Fred Waterford (Joseph Fiennes) and his wife Serena (Yvonne Strahovski). June was previously married; her husband was murdered by the regime, but she secretly hopes to be reunited with her young daughter.

ASSIGNMENT X: You said you had read THE HANDMAID’s TALE novel earlier and thought it was great, and then this project came together …

AX: Do you feel there’s any kind of continuum from Robin Griffin in TOP OF THE LAKE to June in THE HANDMAID’S TALE?

AX: Because they’re both women who have these horrible things done to them, and then they come through it with a sort of determination …

AX: How is it dealing with that nun-like handmaid costume?

AX: How is it playing the scenes where June is being a mother to daughter Hannah, who is played by Jordana Blake?

MOSS: She’s an angel, and she’s so professional, and smart, and sassy, and she’ll be joking around about something, and then you’ll say “Action,” and she just drops right into it. So we got really, really lucky, because working with children can be difficult, and we’re so lucky to have her.

AX: Alexis Bledel plays Ofglen, another significant handmaid in the story. In real life, she is married to your MAD MEN costar Vincent Kartheiser. Did you suggest Alexis Bledel for the role?

MOSS: Not at all. It came up completely randomly as a name for Ofglen, and [executive producer/series adapter] Bruce Miller asked me what I thought about her for Ofglen, and I said, “She’s absolutely perfect. She’s also one of the nicest people, and she’s so great to work with.” So it was totally random.

AX: The story is told from June’s point of view, so you do a lot of voiceover work for the series. Do you gear up any differently to do the voiceovers than you do your on-camera scenes?

MOSS: No. What’s great is now what we’re doing, what we didn’t do in the very, very beginning – the voiceover that you hear in Episode 1 has been recorded after we shot it. We did do one that was before we shot it, and scrapped it. We realized it was very important to shoot the scenes first, for obvious reasons. There does take some gearing up – I do consider it as much of a performance as when I’m on camera and I treat it that way, being in a certain place, being in a certain head space.

AX: What’s different for you about THE HANDMAID’S TALE than other projects you’ve done? I mean, this would always be timely, but right now, it’s like, if it didn’t exist, you’d have to invent it with everything going on in this country.

MOSS: The second season of TOP OF THE LAKE. We shot that last year.