The executive producers chat about the new season of WGN America 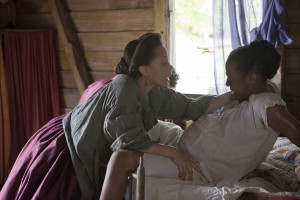 Created by Misha Green and Joe Pokaski, UNDERGROUND is a drama that explores the early days of the Underground Railroad, which began before the American Civil War. The Underground Railroad helped enslaved Americans escape the South to the free states of the North and to Canada. Although UNDERGROUND deals primarily with fictional characters, including escapees Aldis Hodge’s Noah, Jurnee Smollett-Bell’s Rosalee and Alano Miller’s Cato, and Jessica De Gouw’s white convert to the cause Elizabeth, in Season 2, UNDERGROUND includes some notable historical figures. Chief among these is Underground Railroad “conductor” Harriet Tubman, played by Aisha Hinds, and black statesman Frederick Douglass, played by one of UNDERGROUND’s executive producers, music star John Legend. The series airs Wednesday nights on WGN America.

Green and Pokaski, who also serve as executive producers and show runners, sit down to talk about all things UNDERGROUND Season 2.

ASSIGNMENT X: What did you learn during Season 1 that you’ve been able to apply to Season 2?

JOE POKASKI: Anthony Hemingway [another of UNDERGROUND’s executive producers, who directed four episodes in Season 1 and another four in Season 2] should direct a lot of episodes, and that our actors can do anything, so let’s throw more impossible at them.

AX: Did you think, “It would be good to have this character meet this character” in a way that you hadn’t been thinking about it before – for instance, Elizabeth and Cato?

GREEN: I think we always knew with Season 2 that we were going to [center] ourselves around the station, and everybody was going to come in and out of there in different ways that will hopefully be surprising. So I think we always saw all our characters coming across each other at some point.

POKASKI: I think a pleasant surprise that we found as we were breaking both Cato and Elizabeth’s stories is that they were running on oddly parallel tracks. And it kind of surprised us as we broke them out – these two are going through a very interesting arc that I don’t want to spoil too much, that there is some resonance between the two.

AX: Do you feel that UNDERGROUND has more resonance now than it might have had if the U.S. presidential election had gone the other way?

POKASKI: I keep saying, it doesn’t feel so much like resonance but continuity. We keep talking about a lot of not only the bad but the good things about America have never gone away, they’ve just changed their names or they’ve hidden and they’ve come back. So I feel like there is a continuity to America that is not going to be undone yet.

AX: We don’t have slavery here in the twenty-first century, but we do have a lot of moral and ethical issues surrounding people who are not being helped and are sometimes being hurt by the current system. How historical do you feel that you’re being, and how much do you feel like this is sort of suggesting to people what their own moral issues may be today?

POKASKI: I think they’re one and the same. I think by just showing history and where it was, it’s without even trying putting a mirror on us in a crazy fashion.

POKASKI: Because we wanted to personalize it as much as possible. So we wanted to start with fictionalized characters, based on a lot of accounts we read, so you could feel yourself in there, so you could understand – whether you’re an accountant in Boston or whatever your life experience – that you could have that spark of an idea that, I was meant to be free, and I’m going to run six hundred miles to get my freedom. We didn’t want to start with the burden of a Harriet Tubman but then create these kind of very real, identifiable characters that rise to the occasion in a world where Harriet Tubman does exist.

AX: Besides Frederick Douglass, are there any other big, historical people that you’re bringing into the story?

GREEN: Patty Cannon [played by Sadie Stratton] is a real person. She was a very notorious slave-catcher at the time.

POKASKI: We start talking, start hinting at a man named John Brown, who was on more of the extreme side of the civil rights movement. So it’s really interesting to know that while the abolitionists had Frederick Douglass, Harriet Tubman and John Brown, it all talked, it all had debate as to what the abolitionist movement was supposed to do, what it should be doing and how far it should go.

AX: You have Frederick Douglass this season …

AX: Did he always want to be in it, or did you go, “Well, we’ve got Frederick Douglass, and we need a little bit of star wattage, and, hey, we’ve got John Legend as one of our executive producers and, hmm …”?

GREEN: Apparently, Frederick Douglass and John have a lot of similarities. He was an accomplished pianist. John is very active in his activism, and so was Frederick Douglass, and they look similar, and so it just was that kind of thing where it’s like, we could go look for casting, or we could just take this perfect opportunity. So it was never in the cards, but it was definitely what we wanted when we thought about bringing him in.

AX: And was there anything about the reaction to Season 1 that surprised you, gratified you, disappointed you …?

POKASKI: I wasn’t surprised. We both wrote the show to be something that we enjoyed, so there was no surprise that other people liked it, too. But I think one of the more gratifying things was just the audience response, particularly in real time. It was really interesting to hear that people were watching with their families, or people would watch the show and go look up something that we mentioned as almost a footnote, or were even looking up their own ancestry to see how they fit into the story.

AX: Has the division of labor between the two of you shifted at all in Season 2?

POKASKI: No, I think we’re both breaking our backs every day, still.

AX: Are you still in the same place you were physically in Season 1, location-wise?

GREEN: We’re done shooting now, but we were in Savannah, Georgia this year. Still had some weather stuff with hurricane evacuation and all that, but it’s a beautiful city, and it was great to have that kind of place to go before the show.

AX: Have you learned anything new in between seasons?

POKASKI: Absolutely. It’s amazing to have a job where you get to learn and you get to kind of synthesize history into something that other people can enjoy. Every day, it’s been fun to learn.

AX: Have you found that there are certain types of scenes that pop for you better than other types of scenes, like, I don’t know, scenes where Elizabeth hits somebody over the head with a board?

GREEN: [laughs] Who doesn’t like a good hit? Come on. No, I think we just keep trying to tell exciting stories, and complicated stories, and wherever that takes us is where it excites us.

AX: Do either or both of you have any other projects going on right now that we should know about?

POKASKI: Not that we can talk about without getting shot.

AX: Don’t get shot. What would you most like people to know about Season 2 of UNDERGROUND?