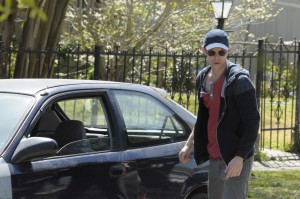 In AT&T Audience Network’s MR MERCEDES, airing Wednesday nights, no one but the audience knows the true identity of the title character. To the untrained eye, Brady Hartsfield, played by Harry Treadaway, is a slightly withdrawn, tech-savvy young man who lives with his widowed mother (Kelly Lynch) and supplements his income by driving an ice cream truck. However, in this ten-part adaptation of Stephen King’s bestseller, Brady’s hobby is murder. Two years ago, he used a stolen Mercedes to kill and cripple people waiting to enter a job fair, and now he wants to do something even bigger. Retired police detective Bill Hodges (Brendan Gleeson) is trying to track Brady down before there’s another mass killing.

English actor Treadaway previously spent three seasons on PENNY DREADFUL as Dr. Victor Frankenstein. His other credits include the feature films HONEYMOON, THE LONE RANGER, COCKNEYS VS. ZOMBIES and CONTROL. In a Q&A session and in a private discussion later, Treadaway talks about playing a very frightening person.

HARRY TREADAWAY: I think the PENNY DREADFUL side of things is a sort of poetic literary horror, Gothic romantic horror, and this is the sort of suburban cul de sac next-door-neighbor horror which, for me, is far more frightening.

AX: Would you describe Brady as someone who is hollowed out?

It was the creepiest character I’d read in a long time. Reading the book, I did have to pinch myself at times to believe that I was going to be involved in bringing it to life and also to be able to play such a deliciously disturbed character as Brady.

TREADAWAY: It was fascinating and sad and weird reading about all the children who kill and people who have no empathy, to try and do a two-month crash course on psychopathy and try to watch as many documentaries [as possible] and try and get under the skin of someone like that and not to judge in a weird way, which was a tricky element of that, because obviously he does some heinous things, to try and understand the roots and the anchors of that and to try to justify it to myself. It was wildly fun and slightly strange, and I found myself watching TV shows in the evening which had no empathy to keep me on a sort of even simmer – UFC, SHARK TANK, Fox News. 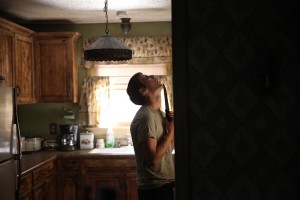 AX: You as an actor aren’t in the scenes, but we see Brady as a young boy played by Braxton Alexander. Do you believe that he’s already damaged at that point, or do you think his childhood experiences are the source of his mental state?

TREADAWAY: It’s a nature/nurture debate, I guess. It’s where do you go on that line? Is anyone born evil, or are they made evil? That’s a question that psychologists ponder ‘til today. Personally, I think it’s probably a bit of both, and you can have a propensity towards certain brain chemistries that you could be born with, but also it’s context and upbringing and how your childhood shaped you as well. So certainly Brady fits into the category of both of them. He was brought up in a situation where empathy and love were pretty skewed.

AX: Do you find the overall subject matter of MR MERCEDES to be scary?

TREADAWAY: For me, what was scary – your instant reaction is almost to think of the higher-profile acts of violence, which we are all skirting around talking about. Terrorism attacks with cars, et cetera, are horrible, are horrific, but the more I researched it, the more I realized there’s a lot more acts, moments that happen like that that I’ve never heard about, school shootings or other people with cars or people that aren’t affiliated to any group whatsoever other than to try and cause absolute pain for people. That’s sad for me. It’s terrifying and sad and disturbing that we have people out there who I would say need help, but don’t find it and end up going to do that. And I think Stephen King taps into the zeitgeist of what scares us so amazingly well. The fact that it was based on something not affiliated with anything other than a moment in someone’s life [King reportedly based MR MERCEDES on his own near-fatal experience of being hit by a vehicle] made it seem truthful and real.

For me, it was just as fascinating trying to get into the skin of someone, trying to empathize with someone who had no empathy, that sort of cul de sac nightmare, that suburban psychopath, the person next door who is totally normal and friendly and nice, but what’s going on in his basement literally and metaphorically, that’s I think what’s scary about this. The guy runs the local ice cream truck and the kids love him, and yet he’s broken and nasty.

AX: Did you do anything to shake off the character once you were done filming?

TREADAWAY: It did take about a month to sort of re-find my humanity. I’ve been climbing mountains in Wales and trying to spend some time in nature and jump in some lakes.

AX: [honest opinion] I thought it was great.

TREADAWAY: That’s what I would most like people to know about it. That you thought it was great.