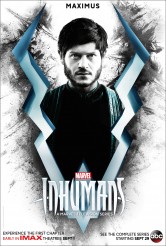 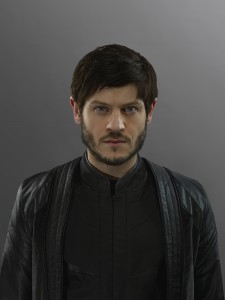 In the new series MARVEL’S INHUMANS, Friday nights on ABC, there is a battle for power in a secret civilization hidden on Earth’s moon. A family of super-powered Inhumans, led by Black Bolt (Anson Mount) and his wife Medusa (Serinda Swan), preside over a caste system that has humans at the bottom. Black Bolt’s mostly human brother Maximus, played by Iwan Rheon, would like to see the situation improve for the non-powered – and things the best way to do that would be to take the throne. Since Maximus would have been king if he’d had superpowers, this is rather understandable. Maximus’ ambitions may be easier to achieve while his Black Bolt is trapped on Earth, in Hawaii.

Welsh actor Rheon has played gentle characters, most recently Ash Weston in several seasons of the British gay comedy VICIOUS. However, he’s known to GAME OF THRONES fans as the horrendously brutal Ramsay Bolton, whose comeuppance at the end of Season 6 – being devoured by his own dogs – seemed no more than he deserved.

ASSIGNMENT X: Obviously, Maximus would like a little more power. Can you contrast his feelings about power to, say, the feelings of Ramsay about power?

IWAN RHEON: Well, I think basically, Ramsay was powerful for a selfish need, and because he was a sociopath. He was all about ego. And he also wanted power because he never had any, in a similar way to Maximus. Whereas Maximus wants power because, in theory, it was already his, it should have been his anyway. And he wants power in order to change what he feels is an archaic system, which is unfair to all of the Inhumans, and that he feels that his brother is not doing anything to change. So with the imminent threat of humanity coming towards them [the moon civilization is in danger of being discovered], and his brother seems to be doing nothing, he just thinks, “Well, I have to take control here, and I’m going to have to do it for him.” And that’s what it is.

AX: So he sees power as a means to an end, rather than an end in itself?

RHEON: Yeah. And Maximus isn’t going to go around killing a bunch of people for a laugh, like Ramsay would. Ramsay would do it and enjoy it. Maximus doesn’t want to hurt anyone.

I think Maximus would have made an incredible king. Had he just got any power at all in his Terrigenesis [the process that brings out an Inhuman’s powers], he would have been a fantastic king, because he’s a great orator, he has empathy for his people, he cares about the people, he’s intelligent, he knows how to get things done, he’s manipulative, he’s got all those traits that politicians need. Unfortunately, because he didn’t get that power, it just meant that he was out of the game and that’s it.

RHEON: There are a lot of Shakespearean characters [that Maximus resembles]. I think a good one to look at is Coriolanus, with Aufidius and Coriolanus. I think it’s very similar to this story, even though the characters are different, but the archetype of the characters is the same. You’re not quite sure which one you side with, and they both have very good points. I think that’s what’s great about Marvel is, they create that discussion and debate, even within people. Hopefully, people watching will be like, “Oh, well, maybe I do think Maximus is right, because on paper, he wants to break down a caste system which is unfair to the lower classes. That sounds good. I agree with him.” It’s just that because he is known historically as a super-villain [in the comicbooks], everyone just watches him as that, and it would be nice if people just gave him a chance and listened to what he had to say. 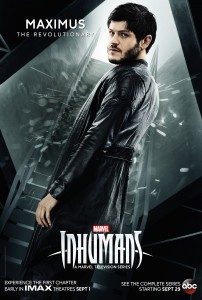 AX: MARVEL’S INHUMANS shoots in Hawaii. In your exterior scenes in GAME OF THRONES, you were mostly knee-deep in snow and ice. Was any part of taking INHUMANS, “Dear God, get me out of the snow”?

RHEON: [laughs] I felt like it was my turn to go and film somewhere nice, yeah. Not that I don’t like Northern Ireland [where GAME OF THRONES is made] in any way. It’s a great place. But it’s cold on a winter’s morning on the side of a mountain in November, and it’s nice to go somewhere warm. Except you have the opposite end of the extreme. The costumes are beautifully designed, but they’re not designed with comfort in mind, and they’re very hot and sweaty. And all our sweat is real and I think you’ll see a lot of sweat in this series [laughs].

AX: When you were cast as Ramsay, did you think, “Well, I’m playing the worst person ever. How does one do this?”

AX: Did you have a particular type of character you wanted to play when you finished GAME OF THRONES?

RHEON: I wanted to do different things, but when a show like this, and an opportunity to play such an amazing character comes along, it’s very difficult to turn that down. Initially, I wasn’t sure – I worried that I might be doing the same thing again, but talking to [Marvel executive vice-president] Jeph Loeb and hearing his passion, he was like, “No, no, no. We’re not asking you to do this to play Ramsay again. We want you to play something completely different. We want you to play this young, frustrated politician who wants to change things, who wants to change the world.” Ramsay doesn’t want that, he just wants whatever he fancies at the moment. He’s just an evil scumbag. Whereas Maximus has got a whole plan. He’s thinking way down the line, and he’s been downtrodden all his life, he’s been ignored, he’s a human in a society that looks down on humans.

I just look for really interesting characters to play that I can get my teeth stuck into and I can enjoy playing them, and maybe do something else and show a different side, show more versatility. So I guess moving to play Maximus, such an iconic character, was a natural progression in a way. And when they asked me to do it, I was like, “Hmm …” But then after a conversation with Jeph, who was – I was like, “Great, let’s go. Get me on a plane to Hawaii.”

AX: Because he is human in a society of Inhumans, does Maximus have more interest tools and things that you use physically use, because he doesn’t have telekinesis or powers like that?

RHEON: No, I think it’s more that he’s had to develop his mind as his tool, that he manipulates people really well. He can make people believe him really well, because he’s had to develop that, because he’s got nothing else. That was his only way of keeping his head above water in a society where everyone just belittles him all the time. He’s only in the royal family because he’s the brother of the king. Otherwise, he would have gone straight down to the mines, in the lower caste, and he knows that. That’s why I think he identifies with these people and, as you see in the first episode, in the Terrigenesis process, where Bronaja comes out and he just doesn’t know what it is, Maximus immediately identifies with him and he feels for him and he wants to help him and he understands how this young man is feeling, because he was there himself. Ramsay does not have the capability to empathize with anything, so there’s the fundamental difference between the two characters. We can dispel that forever [laughs]. 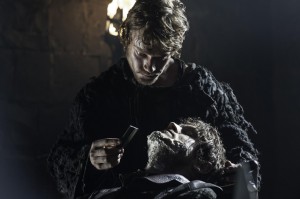 AX: How is it working with MARVEL’S INHUMANS’ green screen sequences?

RHEON: I think it’s really similar to how I approach acting anyway, which is basically, what I feel I’m trying to strive towards as an actor is to be able to do what children do when they play. So green screen is effectively just an extension of that. It’s all in your imagination, and I think it’s really important that when people say, “Right, cut,” or whatever, then you just go, “Cool,” and that’s it. And that’s the way I try to approach acting in general.

RHEON: Yeah. I’ve never been a huge superhero fan, but I’ve always liked the X-Men and stuff like that, so when you get offered to be in something like this, it’s very difficult to turn it down.

AX: How has it been dealing with the GAME OF THRONES fandom?

RHEON: It’s incredible, it’s huge. You can’t go anywhere in the world any more without people knowing it. It’s amazing. It’s an incredible testament to the writers and the people who make it. But yeah, let’s hope MARVEL’S INHUMANS has the same impact.

This interview was conducted during ABC’s portion of the Summer 2017 Television Critics Association (TCA) press tour at the Beverly Hilton Hotel.