The Mountain Between Us movie review 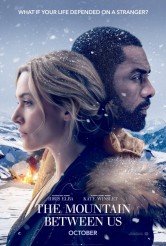 ©2017 20th Century Fox
THE MOUNTAIN BETWEEN US movie poster
Reviews

Movie Review: THE MOUNTAIN BETWEEN US

THE MOUNTAIN BETWEEN US movie poster| ©2017 20th Century Fox

The following observation is totally sincere: one thing THE MOUNTAIN BETWEEN US has going for it is that it does not lose track of the dog that is essentially the third lead character. Most movies with a similar set-up wrongly assume that much of the audience isn’t invested in animal companions, and make us worry that the characters, the filmmakers or both have simply left the poor creature to fend for itself or be unaccounted for. Every time we may start to question if something may have happened, someone will voice this concern aloud and, if the dog isn’t immediately visible, will go looking for him. This awareness is refreshing.

Unfortunately, THE MOUNTAIN BETWEEN US isn’t quite as astute when it comes to the human protagonists, neurosurgeon Ben (Idris Elba) and photojournalist Alex (Kate Winslet). Both are anxious to catch their separate respective flights, him because he has an early surgery awaiting him, her because she’s getting married. When they are both told that they won’t be able to get anywhere until the next morning due to concerns about an incoming storm, Alex overhears Ben on the phone, realizes he’s in the same predicament and suggests they charter a small plane to get to another hub airport that can get them where they individually need to go.

Anyone who’s seen the advertising for the film knows that the charter flight goes down (again, points for not being predictable in why this happens). Ben, Alex and the pilot’s very patient dog (played by two winningly expressive canines, Raleigh and Austin) are stranded in an incredibly beautiful but isolated snowy mountain wilderness.

Elba is extremely charismatic and it doesn’t take much for us to believe that Ben is not only medically knowledgeable, but an essentially heroic soul who, while he may gripe, seriously feels responsibility for Alex. Winslet gives her all, but the dialogue is weirdly tone-deaf, and she’s stuck with most of the especially soapy lines. The script by Chris Weitz and J. Miles Goodloe, based on Charles Martin’s novel, doesn’t allow for subtext, so both Alex and Ben wind up saying pretty much everything that they’re thinking, and not much of it is surprising (yes, Ben is the more reserved of the two, but he still gets around to it). Alex particularly seems to be created for a rom-com; she gets flustered and talks about things in a way that suggests she’s stuck in a situation that is inconvenient rather than potentially fatal. Elba and Winslet together have charm and radiate kindness, which does compensate for some of the awkwardness.

Director Hany Abu-Assad knows how to capture stunning vistas, but he’s less good with pacing. He and the writers also stretch things out to a point where viewers will start asking questions, and there’s also a repetitive motif of Ben assisting Alex that starts to verge on self-parody. All of this could have been avoided if the story’s time frame had been compressed, but the filmmakers seem to mistake length for suspense.

THE MOUNTAIN BETWEEN US has a lot of flaws, but there is something to be said for a love story where the parties involved treat each other with decency and respect – and keep track of the dog.