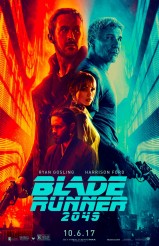 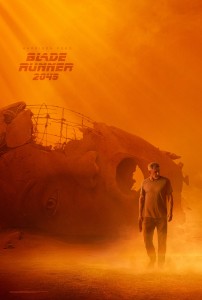 BLADE RUNNER 2049 is set thirty years after the events of the original 1982 BLADE RUNNER. It is a sequel that honors and expands on its predecessor.

Directed by Ridley Scott from a screenplay by Hampton Fancher and David Webb Peoples, based on Philip K. Dick’s novel DO ANDROIDS DREAM OF ELECTRIC SHEEP?, BLADE RUNNER was set in a heavily-polluted, ever-raining 2019 Los Angeles. Replicants are synthetic humans, superficially identical to the real thing, used as slave labor on other planets and now banned on Earth. Replicants who try hiding on Earth are tracked down by specialized cops known as blade runners. LAPD Detective Rick Deckard (Harrison Ford) is an exceptional blade runner – until he falls for a replicant and they run away together.

Denis Villeneuve directed BLADE RUNNER 2049 from a script by Fancher (again) and Michael Green, from Fancher’s story. Replicants are somewhat different than they were in the first film, though they still look human. When they do something they shouldn’t, they are still tracked by blade runners. Detective K (Ryan Gosling) is anLAPD blade runner who is skilled at his job and loyal to his boss (Robin Wright). He steadily gets caught up in a mystery that is at the heart of the BLADE RUNNER mythos.

Would it kill a prospective viewer to know more than this? Probably not, but the twists are strong. This is, refreshingly, a movie where what seem to be “wait a minute” elements get fully sorted out at the right times. BLADE RUNNER 2049 is less future noir mystery and more dystopian science-fiction, with some big ideas that go down smoothly due to the filmmakers’ determination to keep us with the characters. 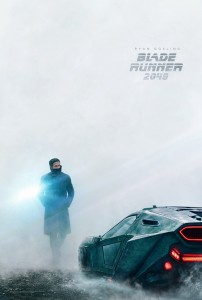 Gosling’s K easily draws our empathy from the start, and what we learn about his personal life makes us bond with him further. As we accompany him on what becomes a dangerous quest, BLADE RUNNER 2049 becomes steadily more immersive. It’s a movie with large spaces that gives us room, both physically and temporally, to let experiences sink in, to enjoy character moments, to worry about danger, and to appreciate nods (large and small) to the earlier film. These include some striking visual effects that would not have been possible even a short time ago. We can tell that they are staged just so in order to make them work, but this doesn’t dim their efficiency.

Since Ford is second-billed on the posters, it’s not spoilery to say that, yes, he’s in the film. More, he gives an extremely affecting performance. Other standouts include Wright, Ana de Arnas, Sylvia Hoeks, Mackenzie Davis and an uncommonly sweet Carla Juri.

It’s possible to want to argue some conclusions reached by characters in BLADE RUNNER 2049. However, we come out feeling like we’ve been on a journey. Part of the film deals with memory and, especially for viewers who saw the original BLADE RUNNER years ago, it brings the gift of making us examine our own recollections of old emotions in a new light.