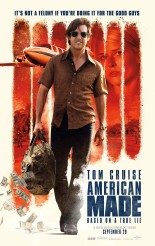 An insane slice of real history 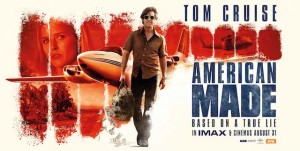 AMERICAN MADE feels a little like a fever dream, especially for those who have been watching both the documentary THE VIETNAM WAR and the fact-based drama NARCOS. AMERICAN MADE certainly stands on its own, but it is set temporally between the events covered in those other two projects, and there is a feeling of cause and effect flow from one to the other.

Barry Seal, the protagonist of AMERICAN MADE, even shows up briefly as a character in NARCOS. He’s been played in previous movies by Dennis Hopper and Michael Pare. Now Tom Cruise takes center screen as the TWA pilot turned CIA photographer turned cartel drug runner turned … well, that’s what AMERICAN MADE is all about. Well before the film reaches its conclusion, there’s an alphabet soup of U.S. government agencies involved, most of them at odds with each other.

The screenplay by Gary Spinelli deviates somewhat from the facts in order to tell a relatively coherent story (or at least a story as coherent as this craziness can get). While both the real Barry and AMERICAN MADE’s Barry both start out as Louisiana-based TWA airline pilots, in the movie, Barry quits his job after being approached by a CIA operative who calls himself Schafer (Domnhall Gleeson). Schafer needs a good pilot who can fly surveillance missions and take photos of communist military forces massing in Nicaragua. Barry gets his own super-fast plane and the gig is exciting. The money could be better, though, and Barry’s wife Lucy (Sarah Wright Olsen) can’t understand exactly what his new job entails. Then Barry is approached by a Colombia cartel, fronted by Jorge Ochoa (Alejandro Edda), Carlos Ledher (Fredy Yate Escobar), and Pablo Escobar (Mauricio Mejia). They would like Barry to fly cocaine into the U.S. for them. Barry never even asks what would happen if he refuses, because they offer him $2,000 per kilo (2.2 pounds). Then Schafer comes back and wants Barry to run guns to the Nicaraguan anti-communist contras. And then …

Barry quasi-narrates events for us via some homemade videotapes. This is helpful, as there is so much going on that Barry’s frequent expression of incredulous bemusement seems the most appropriate reaction. Even when things get potentially deadly, they are also usually borderline absurd. We see enormous events being shaped not by foresight or patriotism or (often) even greed, but rather a determination to win at all costs, including the cost of rational thinking.

For those who may have set notions about how Cruise plays leading characters, he does something different here. Barry neither starts out nor ends up righteous (he does wind up a little more considerate of his fellow citizens). By the same token, he’s not a buffoon, just someone who thinks he can handle a challenge that turns out not to be what he imagined it was. Cruise gives an astute performance, not overplaying either confidence nor ignorance, letting us accompany him rather than indicating where he’s going.

Olsen gives a strong turn as Barry’s spouse and Gleeson is as smooth as we imagine an operative should be. Edda, Escobar and Mejia are all hearty and jovially menacing. Caleb Landry Jones, as Barry’s troublemaking young brother-in-law, and Jayma Mays, as a determined district attorney, are both standouts.

Director Doug Liman has come at the CIA from a number of different directions in projects as varied as THE BOURNE IDENTITY (action drama), MR. & MRS. SMITH (action black comedy/romance) and FAIR GAME (fact-based drama). For AMERICAN MADE, the filmmaker adopts a jocular tone that consistently reminds us that what we’re watching is very much beyond the pale, even though outright humor is infrequent.

There is a sense of moral outrage burning below the surface here, but since Barry himself is apolitical, it never explodes the way it might if the tale concerned someone acting on principle. Barry wants money, admiration and not to get killed by the people he’s working for, not necessarily in that order. When he starts to have regrets, he keeps up appearances; he changes, but he is depicted with a sense of consistency.

AMERICAN MADE doesn’t want to do breast-beating. In the end, it feels like a dramatized story from John Oliver or Jimmy Kimmel, jocular as we’re watching, horrifying as we let the full impact sink in.