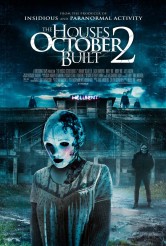 A sequel that dilutes the original 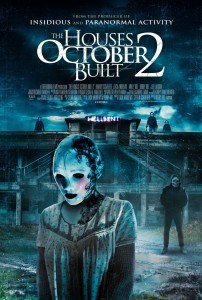 The original THE HOUSES OCTOBER BUILT, released three years ago, was a modest but solid found-footage horror movie. Its premise was that five friends – Bobby Roe (who directed and co-wrote the script), Zack Andrews (also a writer on the film), Brandy Schaefer, Mikey Roe and Jeff Larson – set off during Halloween season to find and document extreme haunted house events. Since this is a horror movie rather than a documentary (even though everybody is using their real names), they encounter more than they bargain for.

THE HOUSES OCTOBER BUILT 2 is set a year after the first film, and dismayingly proceeds to take almost everything back. Although Brandy got buried alive in a coffin, she’s found by police and recovers with no physical harm done. The four guys get off even easier, even though the first film ended with the implication they had been murdered.

The Blue Skeleton group, which evidently buried Brandy, posted video footage of the incident online. The clip has gone viral and Brandy is now known worldwide as “Coffin Girl.” Even though she has no interest in this sort of fame, Brandy’s friends do. Bobby, Zack, Mikey and Jeff have been offered money to promote various Halloween events on social media. The catch – all of the venues want Brandy.

Even if we accept the giant retcon of the ending of the first HOUSES film, THE HOUSES OCTOBER BUILT 2 demands a suspension of disbelief that may be too much for most people. Despite what she’s been through, Brandy agrees to join up with her friends. Yes, she stipulates that they won’t seek out extreme venues, but after what she went through, it’s a miracle she’s setting foot outside her front door, never mind re-entering the world of unregulated horror mazes and the like.

The dynamic that causes Brandy to capitulate and the men to not be very worried about her state of mind or their own safety could be explored. However, there’s no interest in character exploration here. There isn’t even the suggestion that Brandy, or anyone else, is desperate enough for cash to do something that past experience suggests is very dangerous. So either what happened in the first film wasn’t remotely as terrifying as advertised, or else we’re spending time with some of the most willfully stupid characters in horror history. Neither of these outlooks helps us become invested in the action.

THE HOUSES OCTOBER BUILT 2 does offer some reasonably entertaining and inventive (on a budget) scare zones, with a Capture-the-Flag Zombie 5K that looks like a hoot for those fit enough to play along. But this time, there seems to be a lot more daytime shooting, and there are scenes that feel like electronic press kit material, with the main characters interviewing various people at the haunts. Despite showing us that our guys are under surveillance by mysterious others, we’re two-thirds of the way through before anything really starts to happen.

The dialogue and performances are agreeably naturalistic, and it’s good to see the creativity of the maze makers. It’s a shame to see the filmmakers betray the first movie in a way that renders this follow-up hard to believe and not very scary.