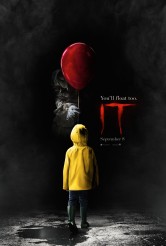 Horror that delivers on what it promises 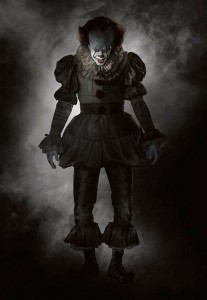 The new IT movie exists on a weird kind of Moebius strip. Set in the late ‘80s, the feature adaptation of Stephen King’s 1986 novel is reminiscent of STRANGER THINGS, which had its first season on Netflix last year but is acknowledged to be inspired by a lot of ‘80s fare, including all the Stephen King adaptations, plus the 1990 TV miniseries adaptation of IT – it feels like the result of one of those temporal paradox stories where someone only exists because they went back in time to introduce their parents to each other. IT in essence reminds you of itself, but that’s fine. IT winds up managing to be the most quintessentially ‘80s horror movie yet. What works best about it is that it manages to transport viewers, at least those willing to surrender to the film’s lures, back to a time when it was easier to invest in a creepy atmosphere and the hardcore beliefs of the young.

The IT novel and the miniseries both took place in two time frames: a past where the main characters are thirteen years old, and a present three decades later. The IT movie concerns itself solely with the adolescents; a “Chapter One” suffix suggests will get the adults if there’s a Chapter Two. We’re in Derry, Maine, a picturesque town where awful things keep happening, especially every twenty-seven years, and especially to children. Bill Denbrough (Jaeden Lieberher) becomes acutely aware of this when his little brother Georgie (Jackson Robert Scott) disappears during a rainstorm. Bill simply suspects that something unnatural and terrible has happened. The audiences knows that Georgie was lured too close to a sewer drain by a being that calls itself Pennywise the Clown (Bill Skarsgard).

Over the summer, Bill and his core of friends – wisecracking Richie (Finn Wolfhard, of STRANGER THINGS), asthmatic Eddie (Jack Dylan Grazer) and timid Stan (Wyatt Oleff) – all have terrifying encounters with Pennywise in various forms. Almost as menacing as the supernatural is slightly older bully Henry Bowers (Nicholas Hamilton) and his gang of young thugs, who wind up driving heavyset Ben (Jeremy Ray Taylor), home-schooled Mike (Chosen Jacobs) and abused outcast Beverly (Sophia Lillis) into Bill’s “loser’s club.” When Ben shows the others his research on Derry’s foul history, Bill decides it’s up to him to stop the thing that took his little brother.

The IT movie is relatively faithful to the novel, though it changes some elements – mercifully in certain instances (no one needs fear an enactment of the “unity” sequence), bewilderingly in others (Pennywise does something that seems extremely counterproductive to his interests, and there’s an unfortunately literal interpretation of one aspect of the text). We also don’t get a clear explanation of the rules governing how and where Pennywise can or can’t appear, or exactly what can or can’t harm him.

However, the imagery is everything we could want. The ‘80s horror concepts get up-to-date visualization via makeup and CGI, so that things that are meant to be disgusting and unnerving really hit. Director Andy Muschietti, working from a screenplay by Chase Palmer & Cary Fukunaga and Gary Dauberman, has his pacing down just right, providing wistful emotional breathing room between set pieces. He also rarely goes for a straight jump scare, preferring to add incrementally to what we’re looking at so that it goes from being mildly disturbing to persuasively life-threatening.

All of the young actors are effective, with Lieberher and Lillis delivering especially soulful performances. Skarsgard is fully up to the challenge of doing something new and very unnerving with Pennywise, using an initially innocent affect to make what he’s doing that more chilling.

For all the tension it brews, IT is a horror movie that invites viewers to settle in and relax, sure in the knowledge that it’s going to deliver on exactly what it promises and what we want.