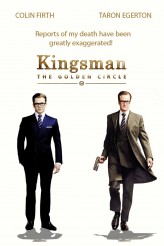 More epic action and joking in the Bondian vein 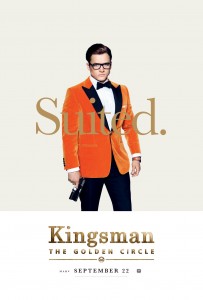 Although KINGSMAN: THE GOLDEN CIRCLE is somewhat more coherent in its topics than the first film, the filmmakers largely achieve tonal consistency. Once again, we have a James Bond-style superspy adventure, with epic action, violence so extreme it’s absurd and a tone that is half-tongue in cheek and half-sort of serious.

Gary “Eggsy” Unwin (Taron Egerton), a trainee/new recruit to the secret British world-saving organization the Kingsmen the first time around, is now an accomplished agent. He goes by the code name Galahad, which was formerly the moniker of his late lamented mentor, Harry Hart (Colin Firth). Since Firth is featured prominently in the advertising for KINGSMAN: THE GOLDEN CIRCLE, it isn’t terribly spoilery to note that Harry isn’t quite as deceased as his friends believe, though they find him in surprising circumstances.

Out in Cambodia, incredibly successful drug trafficker and pop culture fan Poppy (Julianne Moore) has made her own little Disneyesque village. Still, she longs to come in from the cold. Her efforts to legitimize her business spell calamity for a lot of people. Eggsy and Kingsman tech genius Merlin (Mark Strong) turn for help to an American outfit, which teams them up with their agent Whiskey (Pedro Pascal).

Egerton is perfectly good company, Strong and Firth are both great, Pascal exudes more cool than most leading men (those who miss his Oberyn Martell will want to catch this performance) and Moore has a lot of fun with the ever-upbeat and vindictive Poppy. Quite a few name performers show up in supporting roles, most to good effect.

Much of the action is dazzling. Also, the screenplay by Goldman & Vaughn manages to score some points (for both sides, no less) about the war on drugs, getting in some provocative commentary without being heavy-handed about it.

However, KINGSMAN: THE GOLDEN CIRCLE has some of the same problems that were present the first time around. Chief among these is that, while there are some good jokes, a lot of the humor isn’t as funny as the filmmakers seem to think it is. Then there’s the sexism. Yes, it was very much a part of the early Bond films, but even 007 doesn’t depict women this way these days. The logic used by Eggsy’s girlfriend when confronted with a challenge is especially annoying.

Still, the film largely holds up as playful big-scale spy action with R-rated language and baroque violence. If you can hold out through some antiquated attitudes and stretches of flat comedy, there is much here to appreciate.