The actor also talks about his very busy year 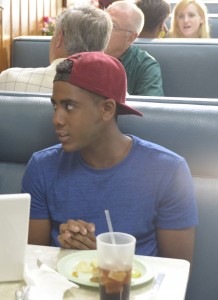 Jerome has been acting professionally for only a little over a year, but it’s been an eventful journey. His first gig was as the sixteen-year-old protagonist Kevin (other actors play young and older Kevin) in the Best Picture Oscar winner MOONLIGHT. That would have been memorable enough, even without the unprecedented kerfuffle of having the wrong winner announced and its makers on the Academy Awards stage before it was realized that MOONLIGHT was the actual honoree. Jerome went up on stage with the rest of the MOONLIGHT company in one of the most unusual moments in Oscar history.

At a party thrown by AT&T Audience Network for the Television Critics Association (TCA) press tour, Jerome sits down to talk MR MERCEDES, MOONLIGHT and more.

ASSIGNMENT X: Did you read the book MR MERCEDES?

JHARREL JEROME: I did, yes. After I got involved in the show.

JEROME: I love the whole journey. I think it was a lot of fun being naïve and playing this innocence, wanting to know everything, but knowing nothing. But then it was also fun knowing that I’m in deep s***, and knowing that I’ve got to find a way out of it [laughs]. Him figuring out, as he goes along, that he’s getting deeper and deeper into this mousetrap, that was the exciting part for me.

AX: Did you know who Brendan Gleeson was before you started on MR MERCEDES?

JEROME: Of course I did. Oh, my God. Huge HARRY POTTER fan, I was a huge fan of THE GUARD – genius. I also watched him in LIVE BY NIGHT as I was going through the auditions for MR MERCEDES, and so seeing him continuously play such different characters – that’s the thing. Brendan knows how to play his characters, and he has such a range, so yeah, I definitely knew him.

AX: In the book, Jerome teases Bill with some dialogue that is, to put it gently, extremely deferential. It’s meant as a joke, but were you relieved that they changed the way Jerome talks to Bill for the series?

JEROME: Stephen King has a way with words, and he has a way with heightening certain situations. I respected it, but I definitely also respect the idea of changing it, and not putting [out there] some things that can be sensitive towards the world, most definitely.

JEROME: I’m an older brother myself, so it wasn’t too hard finding that love for your little sister. I have a little sister almost the same age difference as between me and Makayla [Lysiak], who plays Barbara on the show. Playing an older brother is fun, because I look at Jerome as a superhero. He’s kind of this Robin to a lot of people’s Batmans. That includes Bill, I think that includes his younger sister.

AX: Who do you have scenes with besides Brendan Gleeson and Makayla Lysiak?

JEROME: I work with Justine Lupe, she plays Holly. I worked with [Holland Taylor as] Ida when she comes in and interrupts me and Hodges at the desk. But other than that, just my little sister and my dog. I’m always with my dog.

AX: How is it working with a dog?

JEROME: I’m telling you. Ziggy – that’s who played [Jerome’s dog] Odell – his name is Ziggy. Ziggy’s a genius, he’s a brilliant actor. I mean, a dog can be a brilliant actor. When he gets tired, he doesn’t want to do anything, and when he gets hot, he doesn’t want to do anything, but if he’s good and he’s ready, he’s ready. [laughs] He taught me a lot.

AX: Did you have to learn anything to play Jerome, like how to look like you know what you’re doing with the computer?

JEROME: Yeah, most definitely. Jerome is way smarter than I am, he knows a lot more than I do, so a lot of research came into that. This is going to sound pathetic, but I didn’t even know what I.T. [information technology] stood for before I played a person who knew I.T. things. So it’s just little things like that I wanted to have in my head.

AX: Well, in a Stephen King context, it’s like, “Wait, you’re working with IT? You’re fixing the clown in the sewers?”

JEROME: Yeah, right, exactly. It was so fun playing Jerome. He’s the bright side. He’s sort of the good in the world that’s full of darkness. You see every scene get darker and darker, and then I pop out, and I make a joke, and that feels good, to play a character who’s sort of the mood breaker.

AX: Have you read the other two books in the MR MERCEDES trilogy, FINDERS KEEPERS and END OF WATCH?

JEROME: Not yet. My mom has, and she tells me how amazing they are. I haven’t gotten into it. I read the [first] book to get Jerome’s feel, but I didn’t want to read the book, because I didn’t want to be spoiled, I didn’t want to know what was going on. I have no idea where Jerome is headed, and that’s the best feeling. I haven’t even read the books, so I don’t know his next path, and that excites me, because I just went through this whole season, and I just went through these complete ups and downs of Jerome’s life, and now I have no idea where he’s headed besides college.

AX: When you were filming MOONLIGHT, did you have any expectation that the movie would blow up the way it did?

JEROME: Did anybody [laughs]? Did anybody at all? No, I did not. When I filmed it, it was such an intimate cast, such a small-scale [project]. That was my first credit – no commercial, no show, no nothing. It was MOONLIGHT. So when you jump into a movie, all you think is, do it and learn. But you don’t ever think of anything after that.

AX: What was more surreal – making MOONLIGHT, the success of MOONLIGHT, or that particular moment when you were at the Oscars, it seemed like MOONLIGHT didn’t win, and then all of a sudden, it turned out MOONLIGHT had won Best Picture?

JEROME: I like to say that the entire past year of my life, it was all defined at the Oscars that night [laughs]. It was all wrapped up in the Oscars. That Oscar moment was the cherry on top of a year that’s been insane for me. It’s been a year of a bunch of curveballs and year of a bunch of shocking, shocking things. And so the Oscars was definitely the top of the list.

JEROME: I filmed two other independent films, which hopefully will have a lot of attention, the way MOONLIGHT did, called FIRST MATCH and MONSTER. I also did a BET show called TALES, which Irv Gotti made, and that’s awesome. And right now, I have a lot of things up in the air. But one thing that a lot of people don’t know about me is that I make music.

AX: What kind of music?

JEROME: I make rap music. I love rapping, I love poetry, I love storytelling, and I love telling stories in different forms of art, and rap is one of them. And I’m talking the conscious rap, the lyrical rap, the things that hip-hop lost touch with today. Hopefully, next time you interview me, you’ll be asking about some music stuff.

AX: Is any of your music in MR MERCEDES?

JEROME: Yes, it is. One of my songs made Episode Three. Jerome’s at the desk, and he’s working, and when his father comes in, you can hear some of my lyrics playing over it. The song is called “Only Time Can Tell.” So [MR MERCEDES executive producer/director] Jack Bender blessed me with that one.

JEROME: It’s different. It’s not the typical shock effect, it’s not the lights and the sound, it’s not the pop-outs, it’s more the psychological, character-driven work. And so, if you’re going to watch MR MERCEDES, I think you should be prepared to watch characters you’ve seen before, characters you feel familiar with, and to get into that struggle with them, rather than looking for jumping out of your seat.