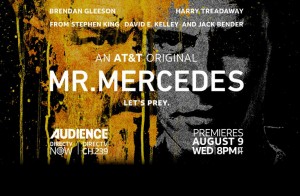 MR MERCEDES, airing on AT&T Audience Network Wednesday nights, is based on the first book in Stephen King’s best-selling trilogy. Adapted for television by David E. Kelley, MR MERCEDES takes its title from the character of Brady Hartsfield (Harry Treadaway), a young man who used a stolen Mercedes-Benz to commit vehicular multiple homicide and has since graduated to other forms of serial killing. Brady may have made a mistake, though, in taunting retired police detective Bill Hodges (Brendan Gleeson), who refuses to give up on the case.

Jack Bender is an executive producer on MR MERCEDES and directed seven of its ten episodes, including the pilot. Bender’s prolific career includes directing on ALIAS, THE SOPRANOS, LOST, UNDER THE DOME, GAME OF THRONES and much more.

ASSIGNMENT X: What’s the most enjoyable part of MR MERCEDES for you, and what’s the most difficult part of this particular project?

JACK BENDER: Well, the most difficult part is making something really good. The most enjoyable part is that I had an exceptional group of people around me, from production on, brilliant actors, brilliant cinematographer, and we all believed in what we were doing, something special. And now letting this out in the world and getting a reaction is very exciting. But I love the work, I love the making of it.

AX: Do you feel there are any significant departures between your version and the book?

BENDER: Maybe not significant, but minor, here and there. Ida Silver [Bill’s extremely frank next-door neighbor, played by Holland Taylor] is one. David Kelley invented her. But she’s a wonderful change, a wonderful addition.

AX: Is she there to get Bill to externalize more of his behavior?

AX: And it also seems like it’s being left more ambiguous in the TV version as to whether Brady’s mother Deborah, played by Kelly Lynch, is complicit in her younger son’s death …

BENDER: Correct. You see a little more later, but yes.

AX: And Brady seems to have a little bit more of a social relationship with Lou, his electronics store coworker played by Breeda Wool, than he did in the novel …

BENDER: Yes, he does. Stephen King writes such brilliant inner monologues. When you read that book, Brady’s point of view on the world and seeing the people and doing all that stuff, you learn so much from Stephen’s brilliant inner monologues. But we decided early on, we didn’t want to do it narrated. We felt that would be too easy. And I think the writers, and Harry Treadaway’s performance, and what I did [as a director], I think we walk that tightrope, which is tricky without the narration that’s in the book.

BENDER: Yes. I will continue to be executive producer and director.

BENDER: That it’s worth watching and it’s really good.