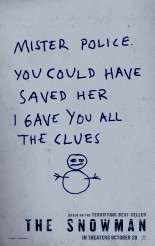 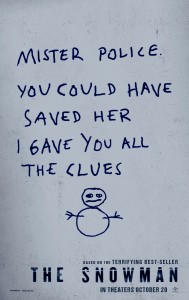 There might never be a great week for it, but this feels like especially bad timing for a movie like THE SNOWMAN to be released. With #MeToo hashtags prominent on the Internet and discussion of gender imbalance everywhere, this doesn’t seem like the best moment for a movie about men fighting over women’s reproductive rights (with women having little or no agency).

Three things THE SNOWMAN has going for it: the visual flair of director Tomas Alfredson, the spectacular Scandinavian scenery, and the fact that the film doesn’t tip its hand early. Based on a well-respected novel by Norwegian crime novelist Jo Nesbo, THE SNOWMAN begins with a decades-early prologue showing us a young boy being orphaned in an uncommonly traumatic manner.

In the present, Oslo, Norway police detective Harry Hole (Michael Fassbender) has a terrible drinking problem – we meet him passed out drunk under a park bench – but he’s still on the force. Harry and his new partner Katrine Bratt (Rebecca Ferguson) find themselves looking into the disappearance of a woman (Genevieve O’Reilly), who has left behind an unhappy husband (James D’Arcy) and a bewildered little girl (Jete Laurence). He’s also left behind an unhappy-looking snowman that harks back to the prologue. This ties to at least one other recent case, and may be connected to a series of older cases investigated by another alcoholic detective, Rafto (Val Kilmer).

Meanwhile, Harry’s personal life is complicated by his ambivalent ex-lover Rakel (Charlotte Gainsbourg), who is raising their adolescent son Oleg (Michael Yates) with her current partner Mathias (Jonas Karlsson). Oleg knows Mathias isn’t his father, but neither Harry nor Rakel has told the youth who his male parent actually is, even though Harry is in his life.

Nesbo has written a best-selling series of books about Detective Harry Hole (presumably that name doesn’t sound in the original the way it does in English). It is very possible that the novels make a compelling case for what, in the movie, seems preposterous. It would be one thing if Harry weren’t there for Oleg, he seems to have been part of his son’s life for a good while and Mathias knows all about it. We are finally given an explanation, but it has no human logic.

And that’s before we get to the case. An early poster for THE SNOWMAN suggested that the culprit would send Harry a note. That specific note does not appear in the final film, nor do the clues it implied we’d get. We follow details of the case as the detectives find them, and they add up pretty much in the way plot points do in a TV procedural, albeit with a little more gore than usual. We get the basic psychology of the criminal, but not the kind of insights we expect.

THE SNOWMAN sets up some resonance between the detectives and their prey, but nobody involved in the movie seems to have any suspicion that having a serial killer who is offended by women’s autonomy and then not having women with much agency in the story could be seen as adding thematic insult to physical injury. This is almost the antithesis of THE GIRL WITH THE DRAGON TATTOO, set on similar turf but without characters with clear idiosyncrasies and motives.

The casting also has a few strange notes. Ferguson and Gainsbourg are lively, but Fassbender is oddly tamped-down, even given that Harry is almost perpetually hung over. D’Arcy, J.K. Simmons, Chloe Sevigny and Toby Jones all contribute solid turns, but Kilmer looks totally out of place.

THE SNOWMAN has some extraordinary visuals that make a strong impression, but that’s more than can be said for its narrative or its people.