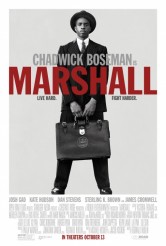 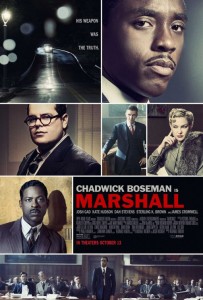 Going into MARSHALL, knowing only that it stars Chadwick Boseman as legal legend Thurgood Marshall, the first African-American justice to sit on the U.S. Supreme Court, one can be forgiven for supposing it’s a biopic. In fact, MARSHALL is based on a very small slice of biography. Set in 1940, when Marshall was the top lawyer for the N.A.A.C.P., the film turns out to be a mixture of courtroom drama and buddy comedy.

The broad facts of Connecticut v. Spell can be found online (with some details so strange that the film doesn’t include them). Wealthy white socialite Eleanor Strubing (Kate Hudson) accuses her black chauffeur Joseph Spell (Sterling K. Brown) of raping her and then trying to kill her by throwing her off a bridge. The N.A.A.C.P., a pioneering civil rights organization (then and now), sends their best and brightest attorney, Thurgood Marshall, to Connecticut to defend the penniless Spell. Because Thurgood is an out-of-state attorney, he needs an in-state lawyer to file papers with the court allowing him to practice. Enter Sam Friedman (Josh Gad), an insurance lawyer coerced into helping out by his brother, with the expectation that this relatively minor matter is all he’ll be doing on the case.

Neither Thurgood nor Sam is prepared for what comes next – the judge (James Cromwell) rules that Thurgood can sit in the courtroom at the defense table, but is not allowed to speak, much less make arguments or examine witnesses. Sam is not only unable to leave the case, he has to do all of the courtroom theatrics. Thurgood is outraged at not being able to directly defend his client, and Sam is appalled at being stuck on the case altogether. (He correctly believes that the he and his wife are in for a lot of social condemnation.) Thurgood, furiously passing notes to Sam along the defense table, thinks his new associate is spineless and incompetent to try a criminal case; Sam thinks Thurgood is a dictatorial showboat.

Even though the screenplay by the father/son team of Jacob Koskoff & Michael Koskoff engages in some tried and true story and character mechanics (in reality, Friedman was far more experienced than he is depicted as being here), it all works in a wonderfully satisfying way. Individually, both Boseman and Gad are charismatic; together, they have magnetic chemistry, regardless of whether Thurgood and Sam are battling or bonding.

Director Reginald Hudlin moves things along briskly and comprehensively, so that while we’re paying attention to character quirks or details of the case, we’re also absorbing at least the broad strokes of the civil rights history of the day. Beatings happen on and off-camera. The specters of lynching, the Holocaust and other incidents of mass brutality loom in the background. Thurgood and Sam are both well aware of the larger world.

And yet the soul of MARSHALL is the byplay between the two men as each takes the other’s measure and starts to mellow. Boseman by now has racked up plenty of superhero characters – comic book (King T’Challa in CAPTAIN AMERICA: CIVIL WAR and the upcoming BLACK PANTHER), real-life sports (Jackie Robinson in 42) and real-life music (James Brown in GET ON UP) – and Thurgood Marshall, a legal and civil rights giant, is well within that wheelhouse. Boseman gives Marshall the kind of confidence and charisma of someone who is sure he is doing the right thing and doing it well, consequences be damned. It’s easy to understand how strangers instinctively trust him.

Gad, known for his comedic roles, knows how to punch Sam’s exasperation and frustration, but doesn’t go overboard, and he’s delicate in moments of trauma. He and Boseman achieve a rhythm together that is extremely pleasing to experience.

The rest of the cast, including Brown, Hudson, Cromwell, and Dan Stevens as a hateful prosecutor, is strong. One might quibble with some choices of detail in the case (one fact that would seem to directly contradict Strubing’s testimony is brought up once and later ignored), but the legal battle is engaging.

Most of all, a lot of likely audience members may be ready for the reminder, provided by MARSHALL, that sometimes there is hope for human progress.