Home » SUPERNATURAL TV Review Season 13 All Along the Watchtower

TV Review: SUPERNATURAL – Season 12 – “All Along the Watchtower” – Season Finale 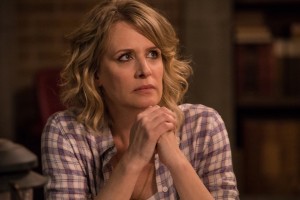 Samantha Smith as Mary Winchester in SUPERNATURAL – Season 12 – “All Along the Watchtower” | © 2017 The CW Network, LLC. All Rights Reserved/Jack Rowand

Okay, so this is curious. It has become traditional for SUPERNATURAL to start each season finale with a relevant montage set to Kansas’ “Carry On, Wayward Son.” In the Season 12 season finale, “All Along the Watchtower,” we get the Kansas song and the montage, but it is largely concerned with the seemingly concluded British Men of Letters plotline. Completely missing from the clips is the character of Rowena, played by Ruth Connell, who has factored heavily into the Lucifer/Lucifer’s half-human son plotline, which continues into next season.

Rowena dies offscreen as “All Along the Watchtower” opens, though Lucifer (Mark Pellegrino) is still there to pick up her phone when Sam (Jared Padalecki) calls, hoping she can work her witchy magic and put Lucifer back in his Hell cage. Lucifer points out that the Winchesters know they can’t kill him, they have no way of confining him with Rowena dead, Crowley is also dead and therefore they basically don’t matter. Lucifer does, however, want to know where Castiel (Misha Collins) is, because everybody knows that Cass is with Kelly Kline (Courtney Ford), the mother of Lucifer’s unborn son.

Cass and Kelly are in a lovely, isolated cabin by the lake. Kelly is having a minor breakdown over the fact that she can’t assemble a baby crib. She knows she will die in childbirth, so this is all she can do for her son. Cass is understanding. He has also purchased what appears to be a lifetime supply of diapers.

A weird sliver of light appears in the yard outside the cabin. Castiel goes out to investigate – and is sent through the sliver to a weird place where storms rage overhead and dead bodies litter the ground. He is almost killed by a horned demon, but the demon is shot by someone with a gun – someone that Cass recognizes with astonishment.

Kelly, unaware that Cass is no longer in her dimension, records a message for her unborn son.

All three living Winchesters – Sam, Dean (Jensen Ackles) and mom Mary (Samantha Smith) – search for Cass on their computers. When nephelim – the children of angels and humans – are born, there are usually big disturbances in the area.

Meanwhile, it turns out that when Lucifer stabbed erstwhile King of Hell Crowley (Mark A. Sheppard), Crowley poured his essence into a nearby rat. The rat fled Hell, Crowley resurrects himself and shows up in the bunker. Since Lucifer said Crowley was dead, the Winchesters are surprised to see him. Crowley explains how he survived. The guys tell him Rowena, Crowley’s mother, is dead. Crowley seems nonplused by this news: “I always thought I’d be the one to kill her.”

Dean lets Crowley have it for creating a situation where Lucifer escaped. Crowley acknowledges that he made a number of mistakes. He wanted to win, he wanted to get back at Lucifer for humiliating him, and he thought that having Lucifer on a leash would keep others from challenging him. The irony is that Crowley hated running Hell.

Sam points out that, with Rowena gone, Crowley may be their best chance of doing a spell that will get Lucifer back in the cage. Crowley wants to help the Winchesters rid the world of Lucifer. If they let him work with them, he promises to seal the gates of Hell so that no more demons will be in the world – well, except Crowley himself. Not fully trusting Crowley, Dean stabs Crowley through the hand, pinning him to the table.

Castiel returns from the other dimension, a little shaken. Kelly is in labor and the rift outside is getting bigger. To soothe her, Castiel tells Kelly again of the vision he had: a world without pain, hunger, want, suffering or hate, a Paradise on Earth, brought about by Kelly’s child.

The Winchesters find a widespread blackout near an isolated house rented by James Novak, the name of the body Castiel occupies.  Castiel isn’t all that surprised to see them. Mary goes upstairs to be with Kelly. Castiel uses his angelic powers to fix Dean’s leg, which was torn open in the previous episode.

The rift is the doorway to an alternate reality (yes, Sam and Dean reference the time when they went to a different alternate reality where they were actors, i.e., the episode “The French Mistake”). Castiel takes Sam and Dean through the rift. This reality has a raging war between angels and demons, with not many humans left. Castiel has faith that Kelly’s baby will close the rift.

And then we see one human survivor in this strange world: Bobby Singer (Jim Beaver)! The thing is, this world’s Bobby doesn’t recognize Sam and Dean. Here, John Winchester died before he had kids or even got married, and Mary remained single, mourning her lost love. The alt-reality’s Mary died several years ago and Dean and Sam never existed here.

Dean, Sam and Castiel return through the rift. Crowley shows up at the house – it’s not that hard to extricate himself from a dagger. Castiel goes up to be with the laboring Kelly and Mary comes downstairs. Dean says he has faith in Sam, Mary, Castiel – and sometimes Crowley.

Lucifer turns up in the yard. Sam, Dean, Castiel and Crowley all come out to confront him. When the boys express hope that God will lock up Lucifer like he did the last time, Lucifer points out that God, or Chuck, is on vacation for Chuck knows how long. Lucifer plans to bring about the Apocalypse, Take Two.

Sam and Dean appear to be running away, but actually, they are luring Lucifer through the rift. Sure enough, he follows them into the alternate reality. Dean tries shooting Lucifer with the anti-angel gun. No effect.

Sam and Crowley start working on the spell intended to seal Lucifer in the alternate reality while Lucifer is busy beating the crap out of Dean. Crowley now mentions that the spell needs one extra ingredient – a life.

Sam and Dean are a little shocked that Crowley is actually willing to sacrifice himself, but Crowley’s hatred of Lucifer is as profound as it gets. Crowley says, “Bye, boys” one last time, the guys run back through the rift to our world, Crowley confronts Lucifer and then stabs himself in the chest with an angel blade. Crowley dies.

Alas, Lucifer is not stuck in the alternate reality after all. He returns through the rift, which remains as the baby is finally born off-screen; we can tell it’s happened due to the huge blast of light.

Lucifer stabs Castiel and kills him – we see the shadowy angel wings that indicate an angel has expired. Mary emerges from the house and pummels Lucifer with a set of brass knuckles inscribed with mystical symbols. Lucifer hits back, sending Mary through the rift – but a wrong step sends Lucifer right after her. And then the rift closes, trapping both Lucifer and Mary in the alternate reality.

Distraught, Dean crouches by Castiel’s body. Sam runs into the house. He finds Kelly dead in the bed and a set of bloody footprints … leading to a young male (not a baby) with glowing yellow eyes.

Barring those occasions where Sam or Dean lost (or at least thought he lost) the other one, this season finale leaves the Winchester boys as devastated as we’ve ever seen them. Dean has lost Castiel (yes, Sam has lost him, too, but …) and they know their mother is trapped in an apocalyptic dimension with Lucifer. And they’ve lost Crowley, too, though either or both of them trying to figure out how they do, want to or ought to feel about that may be more traumatic than the loss itself.

All of this gives the characters and writers a lot to work with in Season 13, even before getting to the potentially world-altering arrival of Lucifer Jr.

As to how all of this plays, Crowley’s act of self-sacrifice is one of the better-scripted instances of such a deed in television. The character isn’t actively suicidal, but we see his realization that it’s not going to be possible for him to have an existence that he actually enjoys. What Crowley wants most now is neither power nor friendship – though he does clearly feel it for the boys – it’s to stick it to Lucifer. And he does. Sheppard sells it splendidly with his performance.

As for Castiel, his death is shocking because it is, at least within this episode, so unheralded. He doesn’t have a big moment where he gets to step up and affirm his purpose, or have another character affirm it for him. On the other hand, earlier episodes in this season have been full of such sequences; they are still near in memory. It was leaked early on that Collins is still with the cast. Unspoiled guess: we will meet the alternate-reality version of Castiel, but the Castiel we know is gone – and with him, the dynamic that made it so fun and often affecting to watch him interact with others.

It’s quite an accomplishment that, at the end of twelve seasons, SUPERNATURAL is set up to tell all sorts of new stories. Carry on.