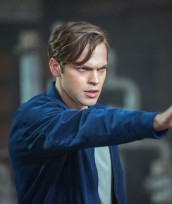 Decent, though more set-up than payoff 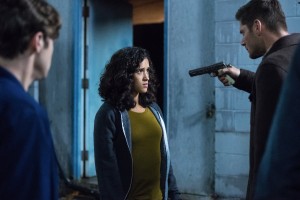 If you’re a very powerful nephilim like Lucifer’s son Jack (Alexander Calvert), and you want to travel to other worlds, turns out that you find yourself a Dreamwalker. A Dreamwalker is a Native American who has the gift of seeing into other realms and other worlds.

Sam and Dean think Mary is dead. When their friend Jody Mills (Kim Rhodes) calls to say that a man – Derek – has been found deceased with his eyes burned out and Jack was seen in his home, Dean leaps to the conclusion that Jack has gone to the dark side, is seeking his father Lucifer, and must be killed. Sam wants more information.

Sam and Dean find Jack as he’s attempting to force another Dreamwalker, this one a teen named Kaia (Yadira Guevara-Prip), to show him the Bad Place again. Kaia gets away when the boys show up. Jack is astonished to hear that Derek is dead, and tells the guys he’s found their mother, alive but in danger. Jack then psychically shows the guys what he’s seen – Mary in a cage.

While Dean and Sam are grappling with the news – Mom’s alive, great! But she’s trapped in another dimension, crap! – Kaia is kidnapped by a pair of angels (Elfina Luk, Brahm Taylor), who want to use her as bait to lure Jack. They’re the ones who killed Derek. The ranks of angels have been depleted by the recent wars. Normally, only God can make more angels, but it’s possible that Jack is powerful enough to do this as well.

In the car, Jack is appalled that the boys thought he killed Derek. Dean admits that he thought Jack was looking for Lucifer. Jack says that Lucifer is no one to him – Sam, Dean, and Castiel are his family. Dean agrees that Jack is family – way to come around, Dean! – and praises Jack for finding Mary.

Kaia protests to her angelic abductors that nobody is going to come for her, but the Winchesters and Jack almost instantly prove her wrong by showing up. The female angel, Elewon (Elfina Luk), tries to persuade Jack that he belongs with the angels. Jack zaps her through a wall, and forces the male angel to stab himself to death with an angelic blade he was about to use on Dean.

Kaia is understandably freaked out. Jack says that Derek told him of sacred places where the walls between worlds are thin, but Kaia doesn’t want to dreamwalk to help Sam and Dean find their mom. Unlike Derek, Kaia never goes anywhere nice in her visions – she only sees “the bad place.” Worse, she comes out of the visions with tangible scars. Sam and Jack are ready to let Kaia go, but Dean actually pulls a gun on her and insists that she accompany them to a sacred site in South Dakota. Jack gets a wonderful, wordless moment of trying to process what’s happening here. Dean is doing something – since it’s Dean, what he’s doing should be right, and yet pulling a gun on a kid doesn’t seem right. Kudos to Calvert.

En route to the sacred site, our team gets driven off the road by Elewon, who has brought angelic reinforcements. Dean, Sam, Jack and Kaia detour to an abandoned ship in the harbor, where they hastily paint anti-angel sigils everywhere. As Elewon and her posse try to use their shared power to blast through the sigils, Jack combines his power with Kaia’s, even though Kaia is clearly in pain. The end result: the attacking angels are blasted to smithereens. Kaia is transported to the side of a road. Jack finds himself in the Bad Place, right next to Mary Winchester’s cage. Sam and Dean are in a Bad Place, although it’s not clear if it’s part of the same world where Jack and Mary are. As the guys trudge forward through the jungle, we see – though they don’t – that they are standing in the middle of a gargantuan creature footprint.

So, help is on the way for Mary, which is good. Dean has stopped glowering at Jack, which is also good. We may get a gigantic monster in the next episode, which could be good if the effects are up to it.

Meanwhile, psychic college student Patience Turner (Clark Backo), who we met earlier in the season, has a vision of Jody in trouble. When Patience announces her intention to go to Jody’s aid, Patience’s father James (Adrian Holmes) essentially throws her out of the house for having visions. Since this is neither an inherently bad thing nor anything Patience can control, James comes off as a reflexive twit. Then again, he broke off all contact with his late mother (who had been played by the great Loretta Devine) for the same thing, so at least he’s consistent.

“The Bad Place” is an episode that’s more set-up than payoff, but that’s okay. It’s entertaining, it’s got suspense, and none of the main characters are sulking, so it’s on the plus side.