Home » SUPERNATURAL Recap Season 13 The Scorpion and the Frog

TV Review: SUPERNATURAL – Season 13 – “The Scorpion and the Frog”

A heist with a SUPERNATURAL twist 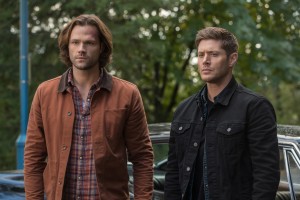 “I’ve seen this movie a thousand times,” announces Dean Winchester (Jensen Ackles) in the SUPERNATURAL Season 13 episode “The Scorpion and the Frog.” So have we – evil mastermind enlists a couple of pros to execute a heist for him, then betrays them once he’s got what he wants. Even so, when Crossroads Demon Barthamus (David Cubitt) – who took over that job once the late Crowley became King of Hell – offers Sam (Jared Padalecki) and Dean a spell that will help them track runaway Nephilim Jack, they can’t resist. It’s not like they have much of a choice, either, since Bart tells the boys that he’ll turn the spell over to current King of Hell Asmodeus if they won’t steal a trunk that contains a mysterious object from human-but-knowledgeable collector Luther Shrike (Richard Brake). Bart says that he trusts Asmodeus even less than he trusts the Winchesters. Given the fractious nature of Hell these days, this seems credible.

“He’ll never see us coming,” Bart assures the Winchesters. Of course, Shrike knows they’re coming, and so does Asmodeus, whose minions ask the collector to let Hell know when the Winchesters arrive.

Sam poses as someone selling a rare demon knife in order to distract Shrike while Dean and Bart’s two helpers, human safecracker Smash, aka Alice (Christie Burke), and demon Grab (Matthew Kevin Anderson), break into Shrike’s vault. The vault only opens for Shrike and with the blood of someone who has been to Hell and back, hence the need for Dean (Sam actually qualifies also, but what the, well, hell). The blood-taking mechanism makes scary noises, so by the time Dean discovers it’s just a pinprick in his finger, he’s embarrassed himself somewhat in front of his temporary teammates.

Meanwhile, Shrike reveals that he’s immortal so long as he’s on his own property, and he knows that Bart sent Sam (although he mistakes Sam for a demon). Shrike kills Grab, and Smash flees the building, only to be sent back by Bart, who of course holds her soul contract. Fortunately, immortality doesn’t make Shrike immune to being knocked unconscious by a good punch from Dean when Shrike tries to surprise the thieves in his vault. 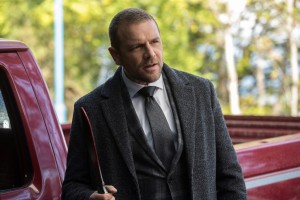 Sam comes up with a way to get around the vault’s deadly booby trap: force the immortal Shrike through it to draw its fire. Smash comes back to crack the safe, and the boys drag it back to the car.

Shrike gives chase in his truck. Sam shoots out the tires and there’s a confrontation. Shrike asks the Winchesters if they want to be on the side of pure evil, which is Bart. Shrike explains that he sold his soul to Bart in order to save the life of his young son, but the boy died a few years later in a drowning accident. The chest stolen from Shrike’s safe contains Bart’s bones.

While Sam and Dean are pondering their choices, Bart shows up and decapitates Shrike (since he’s outside of the house, he was mortal). The boys decide not to exchange the bones for the Jack-finding spell. Bart then threatens to kill Alice. At this point, the guys relent, but Alice herself sets fire to the bones. Good news: Bart goes up in flames and Alice is free. Bad news: the spell goes up with Bart.

Alice leaves on a bus and the boys go back to the bunker. Sam is bummed that they are back to square one in searching for Jack, but Dean is philosophical. Sam is happy that his brother is happy.

Heck, we’re all happy when Dean is happy, but beyond that, there’s not a lot of punch to “The Scorpion and the Frog.” There isn’t even a precise line-up with the title metaphor – nobody betrays anybody against their own self-interest just because it’s their nature to do so – and Dean’s early observation is right, we have all seen this plot before and have a good notion of how it will play out. Bart is a decent enough villain as it goes, but he’s not up there with, say, Crowley or Metatron. Despite Cubitt’s professionalism, it seems like there should be a little more pizzazz to Hell’s top salesman.

“The Scorpion and the Frog” is a decent enough standalone SUPERNATURAL episode, but it’s not one for the record books.