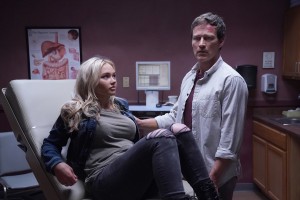 In Season 2 of THE GIFTED, Tuesday nights on Fox Networks, things are getting worse in mutant-human relations. In the series developed by Matt Nix, based on the Marvel X-MEN comics, mutants have been made to register with the U.S. government. At the start of Season 1, only mutants who used their powers (even those who did so inadvertently) were arrested, but now anti-mutant prejudice is much worse.

Natalie Alyn Lind plays Lauren Strucker, a teen who has the ability to create flexible but impenetrable barriers out of thin air. Her younger brother Andy (Percy Hynes White) can make almost anything fall apart. This was quite a shock for their parents, Reed (Stephen Moyer) and Caitlin (Amy Acker), especially since Reed was a prosecutor on mutant cases. That’s all changed as the family has gone on the run and joined the Mutant Underground.

At the end of Season 1, there was a schism in the mutant community, with Lauren staying with her parents and the relatively pacifist Underground, while brother Andy joined the more violently-inclined Hellfire Club. Will the siblings have to fight each other?

Lind won’t or can’t address that possibility at this time. However, the California native, who has been acting since she was four years old, with arcs on GOTHAM and THE GOLDBERGS, is happy to talk in general about playing her super-powered character on THE GIFTED. 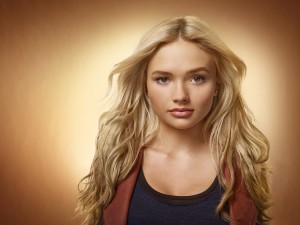 ASSIGNMENT X: So were you a DC or Marvel fan before you were cast on THE GIFTED?

NATALIE ALYN LIND: I was really both. When I was on GOTHAM [as Silver St. Cloud], it was such a surprise, but I always loved all the Batman storylines, and I was also such an Iron Man fan from Marvel. So being able to have both roles is kind of unbelievable. It feels like I’m a part of both families, and it’s pretty incredible.

AX: Did somebody give you a picture of what Lauren’s power looks like before you saw it in an episode? I’m not sure how to describe it …

LIND: Bubbles. Honestly, I’m not a hundred percent happy with the way that my powers look. I feel like in my mind, I wanted something that was more one-dimensional. But I think that these are the very early stage of my character’s powers, so as she continues learning how to use them, they’ll start becoming more into one. In the pilot, I said something about being able to lift water and being able to lift objects, so I think that my character is going to be able to develop into more advanced things.

AX: So is she taking moisture out of the air to create the barriers?

LIND: She can take the molecules in the air and create these little cylinders that can pick up things. But he doesn’t know the full extent of her powers yet. All she knows right now is that she can shield things. But I think she’s going to start realizing she’s more powerful than she even knows.

AX: And how is it playing the family dynamic? Lauren has a little brother who’s obviously got a lot of power and a lot of anger issues, and parents who are not powerful – although there are some hints that Reed may develop powers …

LIND: Yeah. I think that in this family, she kind of has to be the rock, because her parents really don’t understand the whole aspect of being a mutant. At the same time, her brother completely understands it, but uses it in an evil way, so I think it’s definitely Lauren having to be the kind of rock who kind of grounds the two sides of the family together to kind of create a middle, but I think that she can’t be the rock a hundred percent of the time, she has to have her own experiences. But yeah, I think she’s definitely a vital character in the family, because she’s the one that keeps everybody together.

AX: Do we know how long Lauren was aware of her powers before coming out about them to her parents?

LIND: Yeah. I think that the idea behind it is, she found out when she was pretty young. So for years, she’s been practicing her powers. But I think that once she goes underground and meets the other mutants, they start teaching her things that she didn’t even know she could do. So I think she had an idea, but not anywhere near the full capacity of it.

I think that Lauren’s biggest idea is to be an X-Man. She looks up to the X-Men, other people like Andy look up to the Hellfire Club, so she definitely wants to fight for the good, she’s definitely for humans and for mutants, so I think she definitely fights for what’s right, not just for one category of human.

AX: How are you finding playing the jail scenes, when Lauren and Andy were locked up and being tortured?

LIND: It was intense. When we’re in those cages, we’re actually locked in there. You have to put yourself in a scenario of, “What would I be feeling right now?” And there were some pretty crazy days. But I love the way that they turned out, so I was very happy with it.

AX: Not asking for Season 2 spoilers, but do you have a favorite episode or favorite scene from Season 1 of THE GIFTED?

AX: How do you feel about Lauren’s romance with fellow young mutant Wes, played by Danny Ramirez, who can project images in front of people?

LIND: I think that it’s important that she has this new friend that she’s made in the underground society. I think that she had a boyfriend awhile ago who didn’t really understand her, so having somebody who’s close to her, and close in her age group, I think it’s super-important for the storyline and I think it definitely helps my character develop.

AX: Does the cast all gather together and look at how your powers look in the pre-visualizations?

LIND: They don’t really show us anything. When we watch the episodes, we’re watching it for the first time, so it’s definitely a shock for us to see how it works.

AX: Do you have any characters/actors you particularly like scenes with?

LIND: Honestly, my favorite scenes that I’ve done are with Percy. He’s such an amazing actor, and he has such a presence that he brings to set, and in every scene. He’s a very powerful actor, especially for somebody at a young age.

LIND: That you should watch it on Fox.