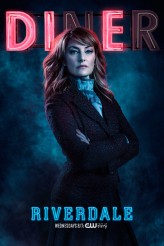 The actress chats about the ARCHIE comics inspired CW series 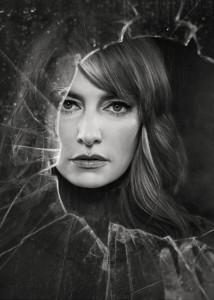 In Season 3 of the ARCHIE comics-based RIVERDALE, Wednesday nights on The CW, the seemingly idyllic small town continues to rival Twin Peaks if not Castle Rock in its dark secrets. Among the new developments, Mädchen Amick’s character Alice Cooper, mother of Betty (Lili Reinhart), Polly (Tiera Skovbye), and the late (or not) Chic (Hart Denton), appears to be coming under the spell of a cult.

Amick, who played Shelly Briggs in both the original and revival series of Twin Peaks, also starred in Witches of East End, Freddie, the reboot of Fantasy Island and the horror feature Sleepwalkers, talks about what’s new for RIVERDALE’s third season.

ASSIGNMENT X: Alice started off almost like the hysterically sexually repressed mom in CARRIE, who you actually played in last season’s musical episode …

AX: But Alice has gone in a different way since that beginning. She’s now open with her own sexuality. Were you surprised at that shift?

AMICK: Well, that is really fun for me to play as an actor, but every season, Alice takes on a different incarnation. So the first season, she was very uptight, very controlling, which just meant that she was hiding a lot of secrets. And then Season 2, we saw the unraveling of that persona, and started to see her past, and her Serpent [gang] past, and things that she was hiding, and running from. Season 3, now she’s so desperately trying to heal herself that once again, she’s going to go all in with whatever take she has on something. She goes all the way.

AX: So is Alice still trying to control her kids, or is she now so involved in self-repair that that’s taking a back seat in her parenting techniques?

AMICK: She’s very involved in self-repair. She’s trying to give her daughter [Betty] breathing room so she’s not too controlling, but there are some things Alice has a hard time not instinctively doing.

AX: How deep is Alice getting with the cult?

AMICK: Alice goes deep. She always does. Alice has a hard time pulling back, so when she believes in something, she goes all the way. So unfortunately we’re going to see her drift farther and farther away into an incredibly controlling cult. 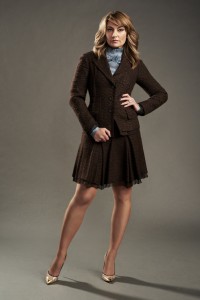 AMICK: Alice and Betty have such an interesting relationship. Because it seems like they’re always at odds with each other, and that’s Betty trying to grow up, and be independent. Alice can’t control her – she’s trying to, but she can’t. Alice also recognizes herself in Betty. And so now, with this cult coming in between them, it’s putting them at odds again. Now, Cooper women always come together when they need to, but right now, they’re definitely at odds.

AX: What does Alice think of Betty’s decision-making?

AX: Yeah. Because you look at Archie’s dad Fred Andrews, and you think, “Isn’t he worried that he’s raised such a naïve kid?” Is Alice happy that Betty is at least not naïve, or is she thinking, “Gee, I wish she’d make some other decisions”?

AMICK: I think weirdly, the relationship between Alice and Betty is almost like two teenage girls. Alice tries really hard to be the parent, and make the better decisions, and so many times, Betty’s the one making the better decisions, so they’re constantly butting heads in that way, in a very adolescent way.

AX: What would you say Alice’s grasp is on her own sanity at this point?

AX: How does Alice feel about being a grandmother, after all of her anger at daughter Polly for getting pregnant?

AMICK: She actually loves being a grandmother.

AX: Do you enjoy playing with the babies who take turns playing Alice’s grandchild?

AMICK: Yeah, they’re adorable. They’re all really great. I think they behave themselves more than the adults. 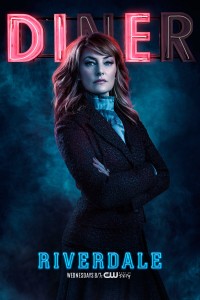 AX: There are a lot of actors playing Alice’s peers in RIVERDALE who came up at the same time you did, like Skeet Ulrich, who plays one of Alice’s love interests, FP Jones, and Luke Perry as Archie’s dad Fred, and Robin Given’s as Josie’s mom Sierra. Were you enjoying seeing these actors come aboard and thinking, “Oh, I know who you are, I’ve seen your work”?

AMICK: Yeah, it was interesting. In Season 1, only a few episodes in, when Skeet came in, he joined us. And it was fun to just sit at the table and share war stories, and “Back in the day.” And we all get to talk about trying to help the newcomers through the business, and we recognize things they’re going through, going, “Yep, I remember going through that, they’ll learn, it’ll be good, they’ll come out of that stronger.”

AX: Do we know if Hart Denton will be back as the maybe-Chic Cooper?

AMICK: I personally want Hart [Denton] to come back, because he’s such a sweetheart, and so talented. I was so impressed by him, because this is one of the first things he’s done. They find interesting ways to bring people back in. I want to pitch to Roberto that he really is FP and Alice’s son, and that Hal [Cooper, Alice’s husband, played by Lochlyn Monroe] made him lie and drove him out of town, because he was starting to find out too much about the real Hal Cooper. Huh? What do you think? Do you like that?

AX: Lili Reinhart, who plays Betty, also plays Alice in flashbacks to Alice’s teen years. Have you had any advice for her in playing Alice?

AMICK: In the flashbacks? Well, if she’s going to base it on teenage Madchen Amick in TWIN PEAKS, I think the look would be cool, but I think Alice at that age has a much rougher edge than Shelly did. Shelly was quite innocent. So I think that she should look like Shelly back in the day, but she should play her with a little more rebel at heart.

AX: Are there any comparisons between doing TWIN PEAKS and RIVERDALE, besides the fact that they’re set in small towns where weird stuff keeps happening?

AMICK: They’re really different. Everybody draws the comparison, and I think it’s nice, I think it’s a nice homage, but they’re just very different-feeling shows, they both have very different rhythms. The biggest thing to me is the rhythm. So some of the visuals I think are similar, but the pace – TWIN PEAKS was so slow, unraveled things, and stood on things for a very long time, and RIVERDALE has that quick-witted, super-fast pace. They’re just two very differently-styled shows, I think. 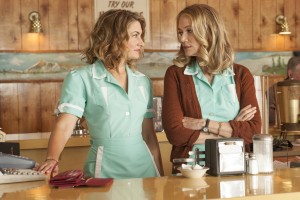 AX: When you got to the end of TWIN PEAKS: THE RETURN, do you feel like you understood what David Lynch and Mark Frost were saying with it? It seems like everybody has their own interpretation of that …

AMICK: I think what I took away from it was, what would have happened if we were living in an alternate dimension. So when we hear her scream, and she’s having this memory, this weird, distance memory, we’ve met the other version of Laura Palmer that didn’t get killed, and through this other dimension, she revisited things that she knew as the other Laura Palmer, and I think it was just that little echo of, what would have happened if that one event didn’t happen, what avenue would it have taken us? That’s what I came away with.

AMICK: I am currently in the middle of producing a docu-series. It hasn’t found its home at a network yet, but we’re right in the middle of doing our final edit, and then it gets shopped. It’s a discussion on mental health in America. 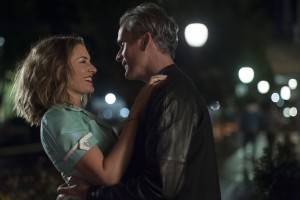 AX: And what would you most like people to know about Season 3 of RIVERDALE?

AMICK: Hold onto your hats [laughs]. RIVERDALE somehow gets even darker and more challenging.

Madchen Amick is scheduled to appear at a signing for the new Blu-ray edition of SLEEPWALKERS at Dark Delicacies Bookstore in Burbank, California, on November 11, 2018.

Article Source: Assignment X
Article: RIVERDALE: Mädchen Amick on Season 3 of the CW Archie comics inspired series plus what she thought of that TWIN PEAKS: THE RETURN ending