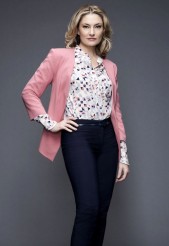 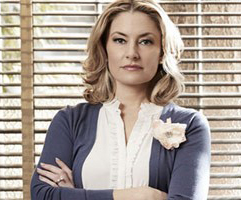 RIVERDALE, in its freshman season on the CW Thursday nights, has been adapted from the famous ARCHIE comics by Roberto Aguirre-Sacasa. Executive-produced by Greg Berlanti (who is also behind The CW’s DC superhero universe shows), RIVERDALE is a lot darker than its source material. Archie Andrews (played by K.J. Apa), Betty Cooper (Lili Reinhart), Veronica Lodge (Camila Mendes), Jughead Jones (Cole Sprouse) and their high school classmates live in a world of secrets, lies, blackmail and murder.

Mädchen Amick, who plays Betty’s mom Alice, knows something about playing characters who live in just that kind of small town – she was a regular cast member in the original TWIN PEAKS as Shelly Johnson, and she’s reprising her role in Showtime’s new edition of that series, coming in May from director David Lynch and his co-writer Mark Frost.

Amick, originally from Sparks, Nevada, got her onscreen start in an episode of STAR TREK: THE NEXT GENERATION. She was recently a series regular in Lifetime’s WITCHES OF EAST END as shapeshifting Wendy Beauchamp.

Amick’s Alice in RIVERDALE seems to want the best for Betty, but she’s a control freak of a mother who has already alienated her older daughter Polly (Tiera Skovbye). Polly, pregnant by her now-dead boyfriend, has just gone to live with his parents, to Alice’s great fury.

Following a Q&A session about RIVERDALE, Amick takes some time to go into depth about her character. She is briefly joined by RIVERDALE costar Luke Perry, who plays Archie’s dad Fred. Perry of course was one of the stars of 90210 and learned a few things about the art of high school angst during his tenure there.

ASSIGNMENT X: Do you conceive of Alice as being somewhat like the mom in CARRIE, or is she just overprotective?

MADCHEN AMICK: You know, for me, when I went in to meet with Roberto [Aguirre-Sacasa] and he mentioned AMERICAN BEAUTY and the mom character in that, I was saying, “Yes. Now I understand what you’re going for.” He was willing to embrace, even though she was this suburban mom and trying to be perfect, that there was a darker, crumbling-inside version of her, and that’s what I really sort of gravitated towards.

AX: There seems to be a dichotomy with Alice, which is that she does not seem to want anybody to act on their sexual desires, yet she works very hard to make herself attractive …

AMICK: I think it’s more that she fears Betty growing up too soon. And so she doesn’t want Betty to go into womanhood. She’s trying to keep Betty’s womanhood as late as possible. So yeah, she puts herself together kind of perfectly – it’s all about show, it’s all about how does she come off to people, how does she fit within the hierarchy of the town? But there’s something deeper going on inside of her.

AX: Given that your character is actually named Alice Cooper and there are musical numbers on RIVERDALE, are you going to sing “No More Mr. Nice Guy”?

AX: I know you’re not allowed to say anything about TWIN PEAKS, but can you talk about how you’ve managed the scheduling between that series and RIVERDALE?

AMICK: There was a little bit of spillover, but I was pretty much done filming TWIN PEAKS before I started RIVERDALE.

AX: You and Luke Perry have both been involved in the high school drama genre before, playing teenagers. What does it look like to you now? Do you see things in the genre that you didn’t see when you were doing it earlier?

LUKE PERRY: Well, this show and that show [90210] are not the same genre, to be very clear on that. This has got a whole other element to do. A lot of it is due to the technology and the social media, the sort of seismic event that occurred in society with all that stuff in between. So these characters, these younger characters, the kids in school, they’re much more sophisticated, they’re much more complicated, they have a lot more going on, more balls in the air, than those characters ever did.

AMICK: And what I loved seeing, when we’re filming, is how Luke is able to bring the younger guys, K.J. and Cole – well, Cole’s been in [television] forever, but [Perry is] such a great mentor to them and just gives them the lay of the land and explains how things are going to go down, because these boys are about to be huge heartthrobs and he knows what that road is like. 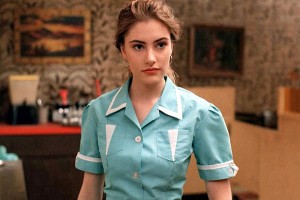 AX: Are you a mentor to the younger actresses?

AMICK: I think so. The girls come up to me from time to time, and they sort of want to know what my career has been like, so yeah, I’m able to share my wisdom. I’m almost thirty years in the business now, I started in 1987, so I give the girls as much advice as I can. And they’ve got to find their own way at the same time. Because it was different when I was doing TWIN PEAKS than it is now.

AX: How did you feel about the way WITCHES OF EAST END finished at the end of its two seasons?

AMICK: Very disappointed. I feel that the network pulled it too soon, and they’ve admitted since then that they feel they pulled it too soon. Unfortunately, in our time period, if you’re not getting high enough ratings, and your advertisers start pulling their dollars, you don’t get things that may take a little longer to develop and reach a wider audience. They were launching Lifetime around the globe with WITCHES, and I was disappointed that they pulled it that soon. I feel like it had a much longer life.

AX: Well, almost all of the characters ended on a cliffhanger …

AMICK: I know. Poor Wendy was left in Hell.

AX: Do you think that RIVERDALE sort of occupies its own niche, or can you compare it to other shows on the air right now?

AMICK: Well, I think it touches on genres that people love. I think you have the core fascination of relationships and losing your innocence as a teenager. You touch on murder mystery and what’s behind that. But I feel that the way that it is directed and produced is such a high quality and has its own style that I think it sets itself apart.

AX: What would you most like people to know about RIVERDALE?

AMICK: That what I do love about RIVERDALE is that you have the younger generation that people are going to love to see, the Archie-Betty-Veronica storylines, but they’ve done such a good job of making the parents and the characters on the fringe so interesting that there isn’t one throwaway character on the show, and I think people are going to really enjoy that.

This interview was conducted during The CW’s portion of the Television Critics Association (TCA) Winter 2017 press tour at Pasadena, California’s Langham-Huntington Hotel.