The performer talks playing a leader and learning Comanche 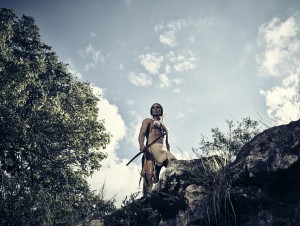 Based on the acclaimed novel by Philipp Meyer, AMC’s new series THE SON premieres Saturday, April 8. THE SON is a saga of Texas, bridging the Old West of the nineteenth century and the oil boom of the early 1900s. Pierce Brosnan stars as the older Eli McCullough, who, when young (played by Jacob Lofland), is kidnapped by a Comanche tribe; the story shifts back and forth between the older man and his younger self.

Zahn McClarnon plays tribal leader Toshaway, who brings Eli up as his son. McClarnon, full name Zahn Tokiya-yu McClarnon, is the son of a Hunkpapa Lakota mother and an Irish father. He was a regular in Season 2 of FARGO and has had arcs on series including LONGMIRE, THE RED ROAD and RINGER.

McClarnon sits down to talk about playing a leader and other aspects of working on THE SON.

ZAHN McCLARNON: I’m older now, I’m getting up there in age, and I’m just playing different characters now. I’m not playing the young rebel guy, I’m playing the patriarchal character. So yeah, there’s a difference. But I’m embracing that, very much.

AX: Is it fun being the person who says, “Okay, I think you ought to do this,” and have everybody go, “Yeah!”?

AX: What are Toshaway’s ambitions for his tribe?

McCLARNON: Well, I think like any leader, any group of people, survival, to take care of them. He sees the white culture coming, he sees what’s going on around him – losing the land. And Toshaway is a little bit worried about this. He cares about what happens to his people. He’s a principled man.

AX: Do you feel that THE SON contributes to the white community’s understanding of Native Americans?

McCLARNON: I think that people will see the humanity that I’m able to bring to the role of Toshaway. Philipp Meyer wrote the book, and the writing steers away from those stereotypes, and it’s not the stereotypical kind of native story, and I don’t play the stereotypical Native guy.

AX: Was there anything you had to learn in order to play the part?

AX: How easy or difficult is that language to learn?

McCLARNON: Extremely difficult. Learning a different language for a role, not only do you have to memorize the dialogue, you have to bring the nuances of different tones to the dialogue. It’s a matter of focusing and sitting down and working on it. It’s very difficult to do. Everything that I can possibly do to memorize the stuff, I do. Tapes, I write it out phonetically, I memorize it phonetically, I’ll sit down with Juanita, the Comanche language advisor, listen to her say it. Everything, anything I can possibly do to get that into my head, I do it.

AX: And do you have more fun doing shows that are a little more outdoors, like THE SON, or a little bit more indoors, like FARGO?

McCLARNON: Depends on the weather that day. It’s hot down in Austin, Texas [where THE SON was largely filmed], in the middle of summer, so going inside was a relief, once in awhile. We’d go inside for the interiors, for the tipis and et cetera. Yes, it was very nice to get inside once in awhile. But I don’t mind being outside. I really don’t.

AX: Are you still shooting?

McCLARNON: No, we’re done shooting. We were from May until October [2016], five months.

AX: How many years does the role span, how much does Toshaway age on screen?

McCLARNON: The first season? About a year.

AX: So there’s no age makeup?

AX: Does Toshaway have any romance?

McCLARNON: Yes. [laughs] I’m just joking. No. Toshaway doesn’t have any romance. There are spots where they show that he has a few wives, which the Comanche did have, they had multiple partners, but there’s no storyline to that.

AX: We see that he has a family?

AX: Apart from adopted son Eli, do you as Toshaway have other children in THE SON?

McCLARNON: I do have other children in the show, but I’m not quite sure if that storyline is actually in the show. I’ve only seen one episode, so I’d rather not say, because I don’t know if it’s going to be in there or not.

AX: How similar is the TV version of THE SON to the Philipp Meyer book?

McCLARNON: Well, a lot of it changes from the book. It has to change, because they’re trying to make it into a TV show. There’s only a year – you read six chapters in the book and you span a time period. In the TV show, it’s only a small period. So you’re on Chapter Six of the book, and on the TV show, we’re just hitting those moments. It’s a little different.

AX: So if they do come back for a second season, they’ll still be going back and forth between Eli growing up with the Comanches and the older Eli played by Pierce Brosnan?

McCLARNON: Well, I think as you watch the TV show, you will see how the older Eli’s reflecting back on some of his decisions that he made, and how Toshaway and being a Comanche affected those decisions, or not. And Toshaway sees a different perspective on the different cultures that are surrounding him, through Eli’s eyes, and he’s taught that as well. So he’s learning. He learns just as much from Eli as Eli learns from Toshaway.

McCLARNON: We’re finishing the last season of LONGMIRE. Netflix announced it will be the last season. And a couple of other things going on that haven’t been finalized yet, but everything’s going very well. Happy to be working.

AX: And what would you most like people to know about THE SON?

McCLARNON: It’s compelling television, exciting TV, fun. You’re going to see the correlation between what’s going on today in contemporary society and what was happening in the 1800s and the early 1900s in Texas. There are a lot of similarities going on – especially with the new guy in office. I’ll stop there at that. But you’ll see.